A letter that John F. Kennedy allegedly wrote to Mary Pinchot Meyer, believed to be JFK's lover, was auctioned for more than $80k. 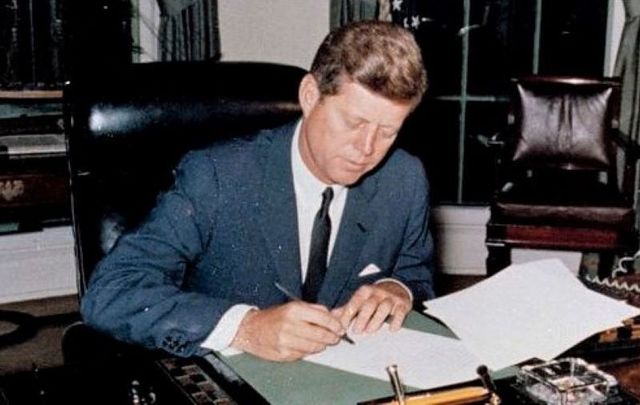 October 23, 1962: President John F. Kennedy signs the Interdiction of the Delivery of Offensive Weapons to Cuba in the Oval Office of the White House in Washington, D.C. JFK Library / Public Domain

A letter that John F. Kennedy allegedly wrote to Mary Pinchot Meyer, believed to be his lover, went up for auction, in June 2016. She was later found murdered and a secret diary she had of the alleged affair disappeared.

The letter, which was never sent, was meant for Pinchot Meyer, a family friend thought to be romantically linked to the former President. Meyer was an accomplished artist whose work was considered increasingly valuable at the time of her death. She met Kennedy through Robert Kennedy when he sold his house to close friends of hers.

Famed Washington Post Editor Benjamin Bradlee, her brother-in-law, subsequently wrote that she was indeed involved romantically with Kennedy and often met with him when Jackie was out of town.

On October 13, 1964, Meyer was shot and killed in Georgetown. Raymond Crump Jr. was charged with her murder but was found not guilty. Her murder has never been solved.

The existence of Meyer's diary became known to Bradlee, who was married to Mary Pinchot Meyer's sister Toni. He went to Meyer's home to break in and grab the diary after she died and found CIA Director of counterintelligence James Angleton, who also knew Meyer, already there sawing off the lock. Meyer's husband had also been a CIA operative.

Bradlee took possession of the diary, which has never been made public. It is alleged the diary was eventually given to the CIA who burned it.

Kennedy's affair with Meyer is described as "very dangerous" by the journalist and Kennedy's close friend Charles Bartlett who stated: "This was a dangerous relationship, Jack was in love with Mary Meyer. He was heavily smitten. He was very frank with me about it."

The unsent letter from Kennedy thus has real historical impact. The top of the White House stationery is cut off, but a faded watermark is visible, The New York Times reports.

Although the letter is undated, it is believed to be from October 1963, a month before Kennedy was assassinated.

The letter reads: "Why don’t you leave suburbia for once — come and see me — either here — or at the Cape next week or in Boston the 19th. I know it is unwise, irrational, and that you may hate it — on the other hand, you may not — and I will love it. You say that it is good for me not to get what I want. After all of these years — you should give me a more loving answer than that. Why don’t you just say yes."

The letter ultimately sold through the Boston-based R.R. Auction for $88,971.

R.R. Auction executive vice-president Robert Livingston said although Kennedy was in Boston on October 19, it is unknown if he actually met with Meyer.

“It’s something you wouldn’t expect to see from a president,” he said. “And the fact that he didn’t send it, obviously he came to his senses.”

He said that the president’s secretary, Evelyn Lincoln, who served as an unofficial archivist, saving Kennedy’s documents, identified Meyer as the intended recipient.