New footage released of JFK in Ireland during his 1963 visit, five months before he was gunned down, looks eerily like what happened in Dallas on November 22nd, 1963. 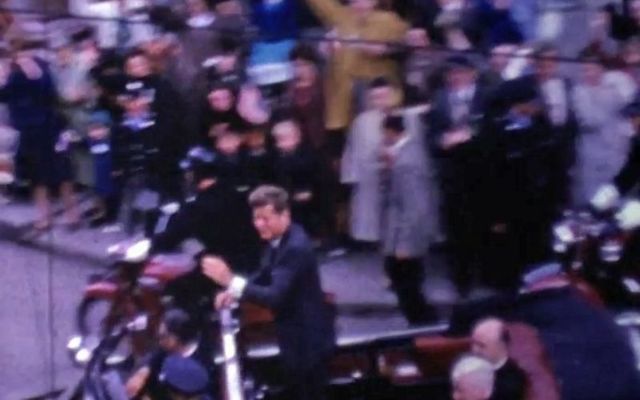 Footage received by IrishCentral shows a one min clip of JFK in Ireland during his 1963 visit, and it looks eerily like what happened five months later in Dallas before his assassination.

During his visit to New Ross, County Wexford in 1963, JFK is even less well protected than he was in Dallas with no Secret Service insight.

He is captured standing up straight and waving from a limousine with no protection whatsoever around him as massive crowds turn out for the president’s Irish homecoming. The lack of security, in retrospect, is shocking.

The woman who took the footage, local amateur historian Peggy Walsh, used a 16mm color recorder and filmed 20 minutes of the president passing by her house followed by street scenes of people attending the event in New Ross where the Kennedy family lived before emigrating to America.

Kennedy appears incredibly youthful and happy waving at the crowds on both sides as he makes his way to the quayside ceremony where the famine ships left from. It is hard to accept that just months later he would be cut down by an assassin’s bullet.