John F Kennedy was sworn in as President of the United States on January 20, 1961. 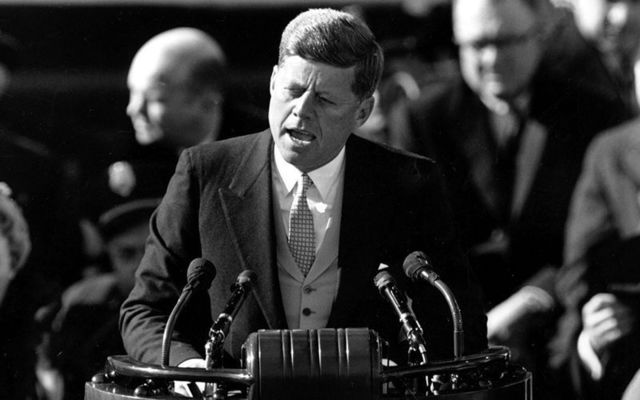 Irish people know full well what they're capable of. JFK demonstrated that to them in 1961. YouTube

John F Kennedy was sworn in on Jan 20, 1961, the first Irish Catholic President of the United States, We take a look at JFK's incredible path to the White House.

Kennedy's election wasn't revolutionary so much as evolutionary. Irish Catholics had been steadily rising from their lowly, poor, hungry position as immigrants in America following the famine of the 1840s. By the 1950s there were many leading Irish-American politicians, businessmen, war heroes and generals, actors, and so on.

In other words, Irish Catholics had achieved great success and the Presidency was just the last remaining prize to be won. With hindsight, it's clear that by the 1950s Irish-America was too successful, too interwoven into American society to be denied that aspiration.

In Ireland, Kennedy's inauguration was revolutionary. Shocking. It had more impact on the people of Ireland than on Irish-Americans.

Although Irish-Americans were achieving great things in the 1950s, Ireland was still a poor and insular country. A large percentage of the population was still engaged in subsistence farming. Television was almost non-existent. Even electricity wasn't yet universal. The post-war boom had passed Ireland by.

Then on January 20, 1961, one of Ireland's sons, a 'cousin' of theirs, was sworn in as President of the United States. It's almost as if at that moment, Kennedy accepting the duties of the Presidency, a veil was removed from Irish people's eyes and a weight was lifted from their shoulders. A whole nation suddenly stood upright and saw clearly that anything was possible.

Two years later when Kennedy visited Ireland in June of 1963 the reception was rapturous. People lined the streets to cheer him. It was as if Kennedy were all four Beatles wrapped up in one man and everyone in Ireland was a teenage fan. Kennedy was living proof of what they could achieve.

Six months later Kennedy was dead. Yet, Kennedy's death didn't signal the end of Ireland's newfound self-belief. Instead, the country enjoyed economic success and for the first time imagined that people wouldn't have to leave Ireland to find opportunities elsewhere. The 60s were the first truly successful post-independence years in Ireland.

It has been a roller-coaster ride since then with great boom times and shockingly hard times, as we are just now getting over. These hard times are not, however, due to a lack of self-belief or a sense that Ireland will always be a poor country as was the case before 1960. No, despite today's great hardships and upheaval, Irish people know full well what they're capable of. JFK demonstrated that to them in 1961.


Do you remember JFK's inauguration? Let us know in the comments section below.