How JFK snagged 1,200 Cuban cigars before the trade embargo

Before enacting the Cuban trade embargo in February 1962, Kennedy requested his head of press Pierre Salinger get him “1,000 Petit Upmanns." 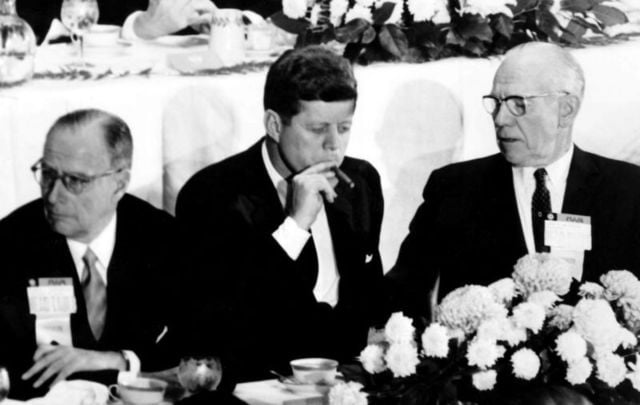 President John F. Kennedy managed to secure 1,200 Cuban cigars for himself just hours before signing the trade embargo with Cuba on February 7, 1962.

Pierre Salinger, President Kennedy's head of press, recalled in a 1992 article for Cigar Aficionado magazine how JFK requested "About 1,000 Petit Upmanns" by the following morning.

Salinger, who entered the White House in 1961, recalls being called into President Kennedy's office one February evening.

"Pierre, I need some help," President Kennedy told Salinger, who said he would "be glad to do anything I can."

"I need a lot of cigars," Kennedy told Salinger.

Salinger recalls that he "shuddered a bit" at the request, but kept his reaction to himself.

"And, when do you need them, Mr. President?"

Without going into much detail, Salinger says that he "worked on the problem into the evening" and was summoned into President Kennedy's office the very next morning.

When President Kennedy asked Salinger how he did, Salinger said "very well" and confirmed that he had gotten 1,200 cigars.

Salinger writes: "Kennedy smiled, and opened up his desk. He took out a long paper which he immediately signed. It was the decree banning all Cuban products from the United States. Cuban cigars were now illegal in our country."

The story of Kennedy’s cigars reemerged in 2012 as the United States rolled into its 50th year of the trade embargo with Cuba.

That year, the Obama administration moved to ease the Cuban trade embargo allowing US businesses to open up locations in Cuba in September.

"A stronger, more open US-Cuba relationship has the potential to create economic opportunities for both Americans and Cubans alike," said US Treasury Secretary Jacob Lew in a statement at the time.

"By further easing these sanctions, the United States is helping to support the Cuban people in their effort to achieve the political and economic freedom necessary to build a democratic, prosperous and stable Cuba."