One doctor has written that President Kennedy likely suffered from celiac disease, which is common amongst the Irish, during his lifetime. 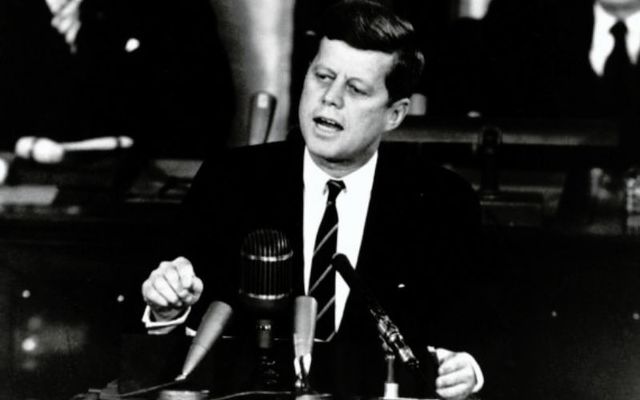 Dr. Peter Green, Director of the Celiac Disease Center at Columbia University College, suspects that JFK was the victim of celiac disease. Flickr

Did JFK have celiac disease? The health of the former president has been placed under the microscope in recent years.

Dr. Peter Green, a Professor of Clinical Medicine, Director of the Celiac Disease Center at Columbia University College of Physicians and Surgeons, suspects that JFK suffered from celiac disease, an often undiagnosed disease common to the Irish.

Green wrote in History News Network that Kennedy’s Irish heritage may have played a part in the disease, noting that it is more highly associated with the Irish than many other races. The article was later picked up by our sister publication Irish America Magazine.

JFK's bad health was well hidden during his lifetime

Green says that by the standards of the time, Kennedy was extensively assessed.

”He was extensively evaluated in major medical centers including the Mayo Clinic and hospitals in Boston, New Haven and New York. Among the multiple diagnoses were ulcers, colitis, spastic colitis, irritable bowel syndrome, and food allergies. His medications included corticosteroids, antispasmodics, Metamucil and Lomotil," Green wrote.

However, while it is not clear that his physicians obtained a definitive diagnosis, a review of his medical history raises the possibility that JFK had celiac disease.

Green explains how celiac disease happens: “Celiac disease is caused by ingestion of gluten, which is the main protein component of wheat and related cereals, rye and barley. The small intestine develops villous atrophy that results in difficulties in the absorption of nutrients.

"Diarrhea and abdominal pain are common symptoms. Elimination of gluten from the diet results in resolution of the inflammatory condition in the intestine and the associated symptoms and prevention of the complications of the disease. A life-long gluten-free diet is then required. People with celiac disease, providing they adhere to the diet have normal longevity."

Green notes it often occurs early in life. "Celiac disease can present at any age," he states.

"In infancy and childhood, it may cause chronic diarrhea and abdominal pain, in addition to growth, behavioral and developmental problems. In older individuals, the presentation of celiac disease is frequently due to the development of complications of the disease. These include anemia, osteoporosis, skin rashes or neurologic problems. The neurologic problems include neuropathy, epilepsy, ataxia (balance disorders) and migraine."

"While the disease is more common in females, men are affected as well. Osteoporosis is common in patients with celiac disease; men often are more severely affected than women. Gastrointestinal symptoms in celiac disease persist for many years prior to diagnosis and are often attributed to an irritable bowel syndrome or spastic colitis.

JFK may have had celiac disease because of his Irish roots

As to the Irish connection, Green says Kennedy may well have been more susceptible because of his heritage.

“Celiac disease was formerly considered a rare disease of childhood. It is now recognized as being very common in those of European descent, one of the most common genetically determined conditions physicians will encounter. Recent studies have demonstrated the country with the greatest prevalence to be Ireland.

"In Belfast, one in every 122 have the illness. The prominent familial association of the disease indicated by the occurrence in one of ten first-degree relatives and in 80 percent of identical twins points to a genetic component of the disease.

"However, the actual genes responsible for the disease have not been discovered, though many groups are working on the problem. It is known that there is a strong association with specific HLA genes that are required for the disease to occur but are themselves not sufficient for the disease to be manifested.

"Kennedy’s Irish heritage, long duration of gastrointestinal complaints (since childhood), diagnosis of irritable bowel syndrome and migraine, presence of severe osteoporosis, and the development of Addison’s disease all lead to a presumptive diagnosis of celiac disease. Kennedy was given steroids for his problems. Steroid use is associated with the development of osteoporosis and Addison’s disease.

"However, steroids were initially used in clinical practice in the 1930s and 1940s for many indications not considered appropriate now.

"In the case of Kennedy, if he did, in fact, have celiac disease, the steroids would have suppressed the inflammation in the intestine and reduced his symptoms, making the diagnosis of celiac disease less likely to be established. The occurrence of Addison’s disease in his sister, however, argues for a familial [genetic] cause of his Addison’s disease, rather than an iatrogenic one."

JFK was never diagnosed with celiac disease despite rigorous testing

Green says that, despite the intense medical scrutiny, his doctors failed to diagnose it, yet at the time there was sufficient knowledge about the disease to allow for a diagnosis.

“Could celiac disease have been diagnosed in Kennedy during his lifetime? Possibly. The disease was first recognized in 1887, as was its treatment with an elimination diet. It was recognized to occur at all ages. However, it was not until the 1950s that the shortage of bread during the Second World War and its subsequent reintroduction in Holland led to the recognition of wheat's role as a cause of this malabsorption syndrome. It was in the 1970s that physicians became aware of the more subtle presentations of the disease. The diagnosis of celiac disease initially requires consideration that it may be present in an individual patient; even now many physicians do not consider the diagnosis.

"It would, however, be possible to diagnose celiac disease in JFK now, if biopsies taken during his life, or autopsy material of the small intestine had been archived and was now made available. Frozen blood samples could also provide diagnostic material, for there are serologic tests now available that are specific for the condition.

"A diagnosis of celiac disease, if it had been made, could have been treated by diet alone. This would have prevented all the manifestations of the disease and its complications.

"Due to the strong genetic component of celiac disease, Kennedy’s family may well be interested in obtaining the diagnosis as well."

(This article was previously published on HNN/History News Network)

Celiac disease has been his focus for almost 20 years, with equal concentration on patient care and research. He is one of the few physicians in the United States with an intense clinical academic interest and expertise in celiac disease. He is the author of Celiac Disease: A Hidden Epidemic, which has been called “the definitive resource for celiacs and those yet to be diagnosed.” For more information on celiac disease visit: celiacdiseasecenter.columbia.edu