In August 1971, Joan Connolly, a mother of eight, was one of 11 people who died during the Ballymurphy Massacre in Belfast. 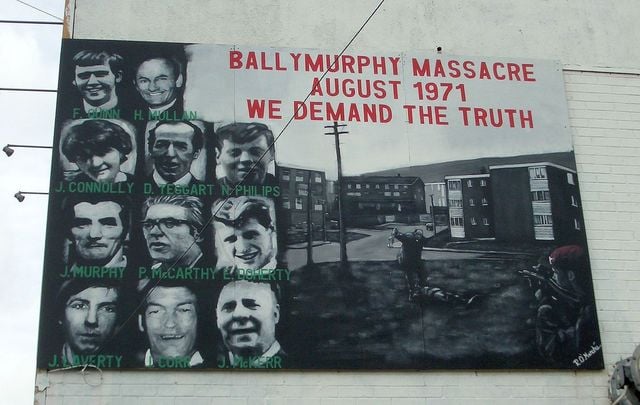 A mural dedicated to the 11 people killed by British soldiers in the Ballymurphy Massacre, including Joan Connolly. R. Ó Murchú / Flickr

Joan Connolly, a mother of eight, was one of 11 people killed by soldiers in the Ballymurphy massacre in August 1971.

Joan Connolly, a Catholic woman from Belfast who had served British soldiers tea and sandwiches during the Troubles, was shot dead by the Army just weeks after inviting them into her home.

According to BreakingNews.i.e., Connolly, who lived in a predominately Catholic area in west Belfast, was shocked by the violence that erupted when the Troubles started and viewed the deployment of British troops as a way to keep the peace.

She even welcomed the soldiers into her home, offering tea and coffee.

Her daughter, Briege Voyle, said: “After the Troubles started, the Army came into our estate (Ballymurphy) and we thought this was great, that they were our friends,” she said.

“My mummy and our neighbor made them tea and sandwiches. They used to come every night and sit and have a yarn with us and we thought nothing of it, that they were here to protect us and it was great fun.

“They were all the best of friends and they were very nice and friendly.

“My older sister actually ended up marrying a soldier.

“They bought my mother a lovely present and they bought my neighbor a bunch of flowers to thank them for looking after them while they were there.

“I remember my neighbor was raging because she thought the present mummy got was better than her flowers.

“They were friendly and we had a laugh and a joke and that went on for months.

“My mummy used to say that the men were always somebody’s son, but then all of a sudden it turned very nasty and things changed.

“People were afraid. The Army got worse and worse.”

Briege was 14 years old when her mother was killed.

She said: “The night my mummy was shot she went looking for me and my sister to get us into the house. But the Army fired the tear gas and I did a runner. It wasn’t until the next day when I heard she was shot dead.

Connolly was only 44 when she was killed by the British Army. She had gone in search of her daughter and had to take shelter from the gunfire by a gable wall with a group of men.

When she witnessed 20-year-old Noel Phillips get shot, she went to his aid. She believed the army wouldn't shoot her because she was a woman, her family previously told the filmmakers of the documentary The Ballymurphy Precedent.

However, they did shoot her.  A bullet went through her eye and according to local witnesses took “half her face off.” She was shot three more times, and the army let her lie on the ground bleeding to death from 9 P.M. to 3.15 A.M because, as their statements say, “She was already dead.”

Said her daughter Briege: “The Army just seemed to turn. One minute they were our friends, the next minute they weren’t. They just saw everyone as the enemy. They thought every Catholic was an IRA person.”