Kennedy wrote about then Taoiseach Éamon De Valera, who declared promised to end partition in Ireland. 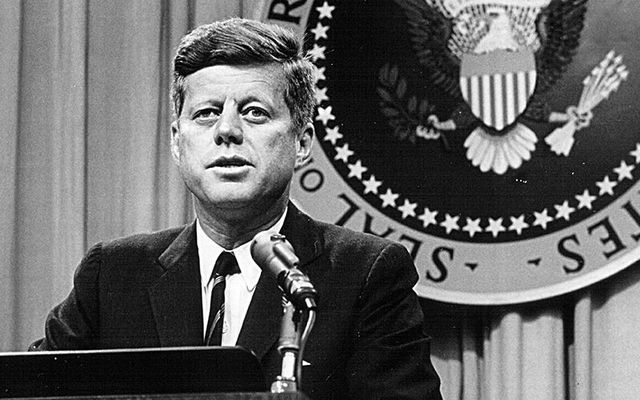 Kennedy wrote about Éamon De Valera in an article in the New York Journal American. Getty

In 1945, some 18 years before he traveled to Ireland, John F. Kennedy wrote a lengthy article about then Taoiseach Éamon De Valera and his efforts to reunite the country in a prescient piece that highlighted the troubles bubbling under the surface in Northern Ireland.

Writing for the New York Journal American, Kennedy documented how De Valera sought to unite Ireland and Northern Ireland 23 years after the partition of the island.

Kennedy additionally documented how De Valera pronounced that Ireland was a republic in the Dáil three years before the nation official declared itself a republic in 1948.

"We are a republic," De Valera said, causing controversy since Ireland was still a member of the British Commonwealth in 1945.

Dillon immediately questioned De Valera's response, asking "how could Ireland be a republic and at the same time a member of the British Commonwealth?"

Kennedy reported that De Valera clarified his statement one week later when he said: "Ireland was a republic associated as a matter of external policy with the states of the British Commonwealth."

Kennedy also spoke of De Valera's devotion to end partition on the island of Ireland, stating that the former Taoiseach and President had "dedicated his life" to that cause.

The future president of the United States argued that by building mutual trust with the United Kingdom the partition of Ireland could be broken and the country could be united again.

Kennedy said that Britain was reluctant to allow a United Ireland because Ireland's military power was so weak, leaving Britain vulnerable to attacks from Ireland.

He said that Britain would consent to a United Ireland if Ireland agreed to give up military bases in times of war.

Kennedy's article concludes with reports from Stormont in Northern Ireland, where Unionist politicians looked on with anger as De Valera promised to end partition in Ireland.

Sir Basil Brooke, the Unionist Prime Minister of Ulster at the time, reportedly listened to the debate in the Dáil and roared that "not an inch" of Ulster will be given back to Ireland.

Kennedy reports that, upon hearing this, De Valera that he would retreat "not an inch" in his endeavors to reunite the island of Ireland.

It is Kennedy's closing sentence that provides a prescient warning of the situation in Northern Ireland, however.

"At this weekend, the problem of partition seems very far from being solved," Kennedy wrote, accurately summarizing the problems in Northern Ireland.

Of course, the problem of partition would only be one of many problems in Northern Ireland that would remain unresolved in the region for decades.