Kennedy and Pope Paul VI arose from their chairs following an audience in the Vatican in July 1963 and shook hands for the cameras, although Kennedy did not kneel and kiss the papal ring as was tradition at the time. 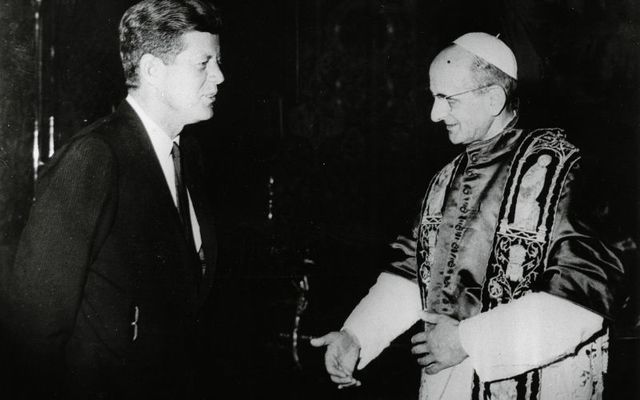 Former President John F. Kennedy and Pope Paul VI greet one another after an audience in the Vatican on July 2, 1963. Getty

Kennedy and Pope Paul VI arose from their chairs following a meeting in the Vatican in July 1963 and shook hands for the cameras.

As a devout Catholic, Kennedy was expected to kneel before the pope and kiss the papal ring on his right hand.

Kennedy, however, did not do so, mystifying pundits and commentators.

Many believe that Kennedy - the United States' first Catholic President - was trying to demonstrate that he could operate as President without being subservient to the Vatican, as some people feared at the time.

Kennedy was aware of the importance of the gesture and reportedly remarked to an aide that his decision to simply shake the Pope's hand would get him "a lot of votes in South Carolina", where he encountered significant opposition due to his religion.

Barbara Perry, the director of presidential studies at the University of Virginia's Miller Center, told the Washington Post that Kennedy would have been wary of being too devout since he planned to run for re-election the following year and would rely on non-Catholic voters.

"He would know that that would be a bridge too far for him in the public eye and the eye of, particularly, Protestants in that day," Perry told the Washington Post.

However, others argue that there is little evidence that Kennedy gave any thought to the symbolic power of shaking hands with the pontiff.

Alan Price, director of the John F. Kennedy Presidential Library, told the Washington Post that the former President typically greeted heads of state with a handshake and was unlikely to have given the greeting much thought.

That may have been true, but Kennedy's greeting provoked widespread anger among devout Catholics, with the Jesuit editors of America Magazine declaring that it was disgraceful that Kennedy did not demonstrate the appropriate etiquette when greeting the Pope.

Joe Biden, who became the first Catholic since Kennedy to win the presidency, also did kneel in front of the Pope and kiss the papal ring during his recent visit to the Vatican, although Biden's decision was far less controversial.

While Kennedy was reportedly trying to convince non-Catholic voters that he was not under the papacy's thumb, Biden arrived at the Vatican at a time when conservative Catholics criticized his pro-abortion stance.