Ireland’s greatest jewel heist - an inside job at Dublin Castle?

The Irish state has never been in possession of glittering tiaras, bedazzling brooches or jewel-encrusted crowns... with one exception. 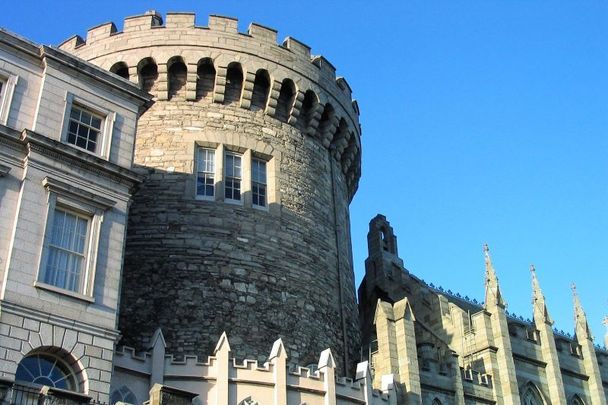 Dublin Castle: The scene of the crime for Ireland's biggest heist. Getty Images

There is no Tower of Dublin. No 900-year-old fortress protecting the State’s jewel collection, because the Irish state has never been in possession of glittering tiaras, bedazzling brooches or jewel-encrusted crowns. With one exception.

Once upon a time, Ireland was home to its very own crown jewels, which became the subject of a national scandal, in July 1907.

The Irish crown jewels consisted of a grandmaster diamond star pendant, which fit into the palm of the hand, a diamond badge, and five ceremonial gold collars. The pendant was made up of a shamrock comprised of emeralds intertwined with a ruby cross. Both were surrounded by a multitude of Brazilian white diamonds and it was all set against a background of blue enamel. Altogether, the collection would be worth several million Euro today, but in a mystery, which still remains unsolved, the jewels were stolen from Dublin Castle, never to be seen again.

The robbery infuriated English monarch King Edward VII, not least because the theft took place on the eve of his visit to Ireland, during which the jewels would be used to swear in Lord Castletown as a knight of the Order of St Patrick.

It was widely considered to be an inside job. The lock had not been forced and the jewels had been stored in Bedford Tower in Dublin Castle, which was at all times under surveillance by soldiers and policemen. 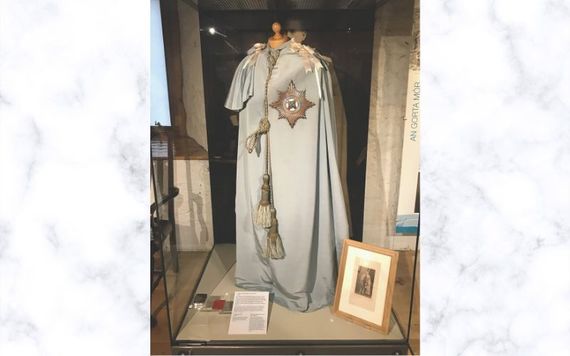 The Order of St. Patrick robes on display at Newry and Mourne Museum.

The entire affair was very bad news for Sir Arthur Vicars, the head of the Office of Arms in Dublin Castle; safeguarding the jewels was officially his responsibility.

There was no shortage of suspects. They included Francis Shackleton (brother of Antarctic explorer Ernest Shackleton), Captain Richard Howes Gorges, and Francis Bennett Goldney, all of whom, at various times, had displayed unscrupulous qualities. But there were also theories that it was done by a republican group, a unionist group and even the Monarchy itself!

But nobody was convicted. 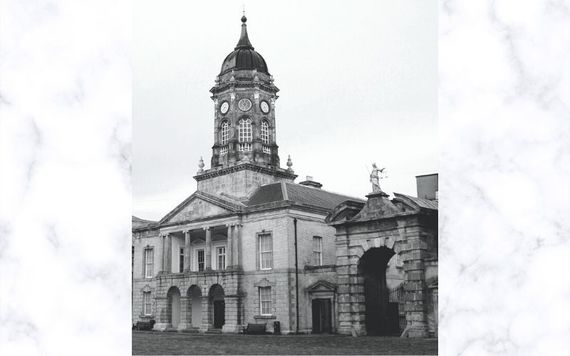 The Crown Jewels Commission (Ireland) tried to get to the bottom of the matter but the main finding of its report was that Vicars had not exercised proper care as the custodian of the regalia. On 30 January, 1908, he received a letter stating his role was at an end.

In the years following the theft, all the suspects referenced above encountered tragedy. Sir Francis Goldney died in a car accident in 1918. Captain Richard Howes Gorges was found guilty of manslaughter and sentenced to 12 years in prison, in 1915, while Francis Shackleton was convicted of fraud, in 1913, and spent some time in jail.

However, most shocking of all, in April 1921, at the age 58, Vicars was living with his wife in Listowel, in Co Kerry, and was murdered in an attack on his home during the War of Independence.

The year before he was murdered, Vicars wrote a will where he laid out, in no uncertain terms, who he thought was the perpetrator. After bitterly ruing the treatment he received over the loss of the Irish Crown Jewels he points the finger at “the real culprit & thief Francis R. Shackleton (brother of the Explorer who didn’t reach the South Pole).”

*Originally published in the Sept / Oct 2019 issue of the print version of Ireland of the Welcomes.