The excavation took place beside Dublin Castle to investigate a 12th-century medieval quarry and a 19th-century police station. 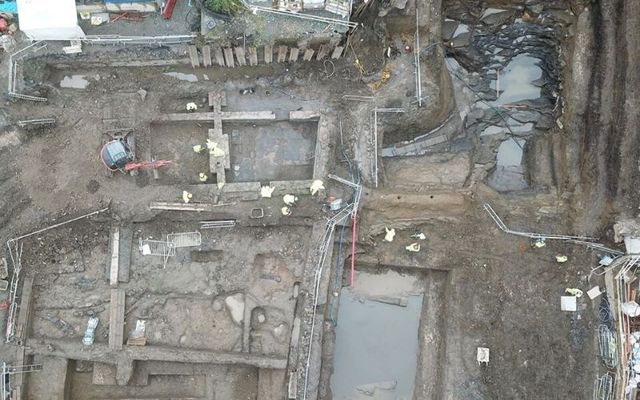 An archaeological dig of a well-known Viking settlement in the heart of Dublin city has uncovered Ireland's oldest prison cells.

The excavation took place on Ship Street - beside Dublin Castle - and investigated a 12th-century medieval quarry and a 19th-century police station.

Archaeological Projects Ltd., who carried out the dig, also found the remains of a medieval punishment burial at the site.

The prison cells are from an old Dublin Metropolitan Police station on Chancery Lane and beside it are walls of a medieval farm, according to Alan Hayden of Archaeological Projects Ltd.

The punishment burial, meanwhile, was a man with both his hands and feet chopped off. Hayden said that the man was most likely punished for insulting a king or a lord.

The 12th-Century quarry provided the rock that was used to build Dublin Castle, the dig revealed.

The excavation took place near the remains of St. Michael Le Pol Church, one of Dublin's oldest churches built in the 6th Century, and made a discovery about the church's name.

The dig made a hugely significant discovery that the Dubh Linn - a pool located under Dublin Castle from which Dublin gets its name - was originally much bigger than it is today.

Today, the pool in its entirety is located beneath Dublin Castle but the dig revealed that the pool stretched for more than 400 meters to St Michael Le Pol Church.

Hayden said that this explained why the church was called St Michael Le Pol, or St. Michael of the pool.

Hayden also said that the discovery explained reports that there were once more than 200 Viking ships docked on the Dubh Linn, located on the River Poddle.