One historical account recalls a day of Thanksgiving celebrated in 1631 after a ship with Irish provisions arrived at a Massachusetts colony. 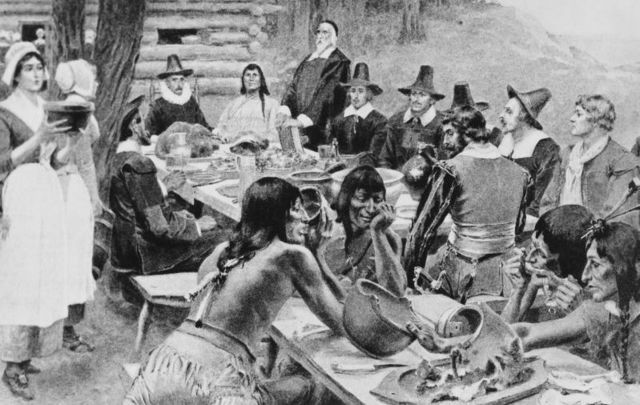 A depiction of early settlers of the Plymouth Colony sharing a harvest Thanksgiving meal with members of the local Wampanoag tribe at the Plymouth Plantation, Plymouth, Massachusetts, 1621. Getty Images

No one can say for sure exactly when the first Thanksgiving was celebrated, but at least one historian thinks it was invented as a day of Thanksgiving for the generosity of the Irish people after a ship from Ireland, bursting with provisions, landed in Massachusetts Bay in the freezing winter of 1631.

Writing in his book "A chronological history of New-England," the eminent 18th-century New England historian the Rev. Thomas Prince recorded:

“As the winter came on provisions are very scarce (in the Massachusetts Bay), and people necessitated to feed on clams and mussels and ground nuts and acorns, and those were got with much difficulty during the winter season… And many are the fears of the people that Mr Pierce, who was sent to Ireland for provisions, is either cast away or taken by the pirates. Upon this a day of fasting and prayer to God for relief is appointed (to be on the 6th of February). But God, who delights to appear in the greatest straits, works marvellously at this time; for on February 5th, the very day before the appointed fast, in comes the ship Lion, Mr. William Pierce, master, now arriving at Nantasket laden with provisions. Upon which joyful occasion the day is changed and ordered to be kept (on the 22nd) as a day of Thanksgiving.”

Historian Michael J. O’Brien believes that, based on this account and in the absence of more convincing evidence as to how the tradition began, it is fair to conclude that the holiday began with this generous gift of food from Ireland.

Why Thanksgiving was celebrated in November, instead of February when the ship landed, Prince’s Annals do not suggest. However, most people believe that it is held on the fourth Thursday of November because, in keeping with the European tradition, it was used to give thanks for the harvest that year. Perhaps the early settlers shifted the date to combine the traditional thanksgiving for the harvest, with the colony’s day of thanksgiving for Ireland’s provisions.

Prince goes on to write that Ireland was the only country in the world to send help to the hungry pilgrims, despite the fact that the settlers had only left England just over a decade earlier. If so, how fitting that two centuries before the US welcomed with open arms nearly a million and a half Irishmen and women fleeing the hunger of the Potato Famine, the most quintessentially American of holidays was invented as a day to thank the Irish people for sending food that prevented the young colony from starving.

How do you celebrate Thanksgiving? Let us know in the comments.