Ragamuffin Day is still celebrated each year with a Thanksgiving parade in Bay Ridge, Brooklyn. 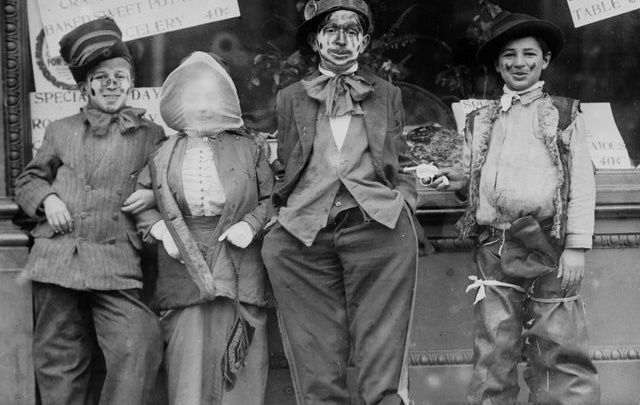 Some Thanksgiving Ragamuffins on Ragamuffin Day, photographed circa 1910 to 1915. Not so different to our Halloween. Library of Congress

Ragamuffin Day is still celebrated each year with a Thanksgiving parade in Bay Ridge, Brooklyn.

I like to joke with my mother about how rough I had it growing up.  The joke is that I know I had it a whole lot easier than she did growing up in Brooklyn and New Jersey, where sometimes her parents and their five children lived in one or two-bedroom apartments.

But even I was taken aback when my mom once told me her brothers and sister used to go begging door-to-door -- and it wasn’t even on Halloween!

But it turns out the begging my mother was talking about had nothing to do with poverty.  Though it’s not widely remembered these days, there once was a time when Halloween was not the primary day for dressing up and knocking on doors seeking tricks or treats.

Read more: How to have the best, spookiest Halloween of your life in Ireland

In the first half of the 20th century, particularly in heavily Irish neighborhoods, the best day for begging -- not to mention often violent and dangerous behavior -- was actually Thanksgiving morning.

Throughout history, Ragamuffin Day saw children dress up and beg door to door

This was the day kids would dress up in sloppy clothes and transform themselves into little Ragamuffins. They would knock on doors and shout “Anything for Thanksgiving!”  The hope was that the kindly homeowner would offer up tasty treats -- just as millions of kids hope for the same every Halloween.

Ragamuffin activities were particularly popular in Irish neighborhoods, and gave kids a chance to, shall we say, try on different identities.

Jack O’Leary, for example, was an Irish-American mover and shaker in the New York State Conservative Party but in his memoir "Playing It Well", O’Leary wrote lovingly of wearing his “mother’s face powder, lipstick and rouge” on Ragamuffin Day.

Indeed, it was very common for young boys to wear makeup or dress up in girls’ clothing on Ragamuffin Day.

“On Thanksgiving we dressed as Ragamuffins -- three Irish-American kids -- and went from backyard to backyard, pub to pub, looking for handouts. But with a difference. We played Irish traditional music on the fiddle and flute and sang and danced to it. We sometimes earned $45 for the day. The best money was made playing ‘The Stack of Barley’ and singing ‘A Nation Once Again.’”

What could New Yorkers a century ago expect to see on this Halloween that was not really Halloween?

The streets might be filled with bizarrely dressed boys and girls not-so-gently requesting money or gifts, “amateur beggars” deemed “a plague” by The New York Times as far back as 1907.  At night, children as young as five prowled their neighborhoods dressed as American Indians with makeup, greasepaint or burnt cork on their faces.

They also lit huge bonfires, which led to a fair share of tragedies.  In 1913, a six-year-old Bronx boy (wearing his sister’s dress) was badly burned as he danced around a bonfire.

Gunfire and gang fights broke out in Brooklyn as packs of Ragamuffins crossed each other’s paths in 1906 and 1907.  Even less explicitly violent behavior created tension.

A still from the movie adaption of A Tree Grows in Brooklyn where Ragamuffin Day is mentioned. Image: Public Domain/WikiCommons.

In the classic novel "A Tree Grows in Brooklyn," Betty Smith writes, “Most children brought up in Brooklyn before the First World War remember Thanksgiving Day … children went around ‘Ragamuffin’ or ‘slamming gates’ wearing costumes topped off by a penny mask.”

Smith’s main character Francie Nolan buys a “yellow Chinaman [mask] with a sleazy rope mandarin mustache.”  Her brother Neely wears one of his mother’s old dresses with “stuffed wadded newspapers in the front to make an enormous bust.”

The streets are “jammed with masked and costumed children making a deafening din with their penny tinhorns.”  Some storekeepers lock their doors to keep the noisy panhandlers out while others unleash “profane lectures on the evils of begging.”

Police and school officials regularly cracked down on Ragamuffins and begging. The ascension of Halloween and calls for more orderly Thanksgiving celebrations seemed to hasten the demise of the Ragamuffin traditions.

But the tradition has not completely vanished.  Every October, community organizers in Bay Ridge, Brooklyn, host a Ragamuffin parade.

Have you ever been to a Ragamuffin parade? Share in the comments!