Irish priest Fr. Denis Reidy recalls in this video how machinery in the 1930s changed Irish agriculture and the life of his family on a farm in Co Cork. 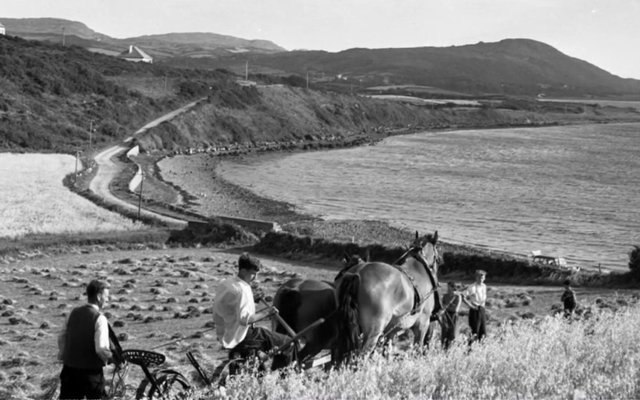 Irish priest Father Denis Reidy grew up on a rural farm in Co Cork and he recalls how threshing machines in the 1930s changed Irish agriculture.

In this video by Irelandmade.ie, we meet people who have restored vintage threshers and the history behind the machine.

In his childhood days, Fr. Denis Reidy explains that a field of corn would have been harvested by two horses pulling a mowing machine that had two seats. One was for the driver and the other mounted over the right wheel was for the sheaf-maker.

Some of the smaller farmers would harvest by hand using a scythe or sickle. Approximately six sheaves were stood up to create a ‘stook’. Next came the stacking and usually after two weeks and when the weather was suitable the horse was called on to draw home the harvest to the ‘haggard’.

In 1859, even on larger farms, threshing machines were said to be rare, and if used, were hired for a few days until the grain was threshed. However, the hiring of portable threshers had become much more common by the later nineteenth century.

In the 1930s, Reidy's father decided to buy a steam engine and thresher for approximately £600, which was a popular choice at the time by local farmers as it cut their labor time in half.

His father had never used such a machine and after some on the job learning, he also used the steam engine towed thresher on neighboring farms. He had purchased a Marshall thresher and steam engine from W. McBride & Sons, Cork.