In this excerpt from the newly-published "Birth & The Irish," Damien Shiels explores a tragic yet fascinating aspect of Irish and Irish American history. 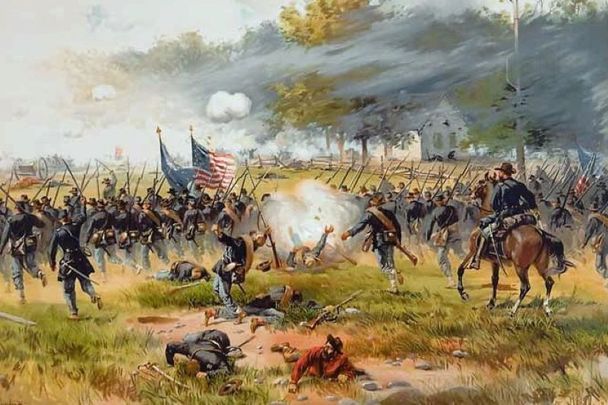 A painting of The Battle of Antietam, the US Civil War's deadliest one-day fight, by Thure de Thulstrup. Public Domain

On 18 May 1871, Chicago attorney J.W. Boyden sat down to pen a letter for illiterate Irish emigrant Jane Murphy.

"She is in my office today," he began, "debilitated by having borne 13 children, by prolapsus uteri, and by a 6-inch tumour on back of her neck; and in tears, having walked four miles, from her shanty home on the open prairie, to see about her pension."

The 57-year-old Monaghan native had left her dying husband’s side in order to make the journey. At most 16 when they had married in 1830, Jane had spent the larger part of three decades moving from one pregnancy to the next. Her prolapsed uterus was testament to the physical toll repeated childbirths had taken on her body.

"I have given birth to thirteen children," Jane explained, before going on to reveal the fate of each of them in turn. As was the case for many other emigrant women, not all had lived to accompany her to America.

Jane Murphy’s voice and the story of her children have survived because of an event that, at first glance, would seem to have little to do with Ireland, or with the subject of birth – the American Civil War. Jane’s association with that bloody struggle came via her seventh child, Michael. He had been among the c. 250,000 ethnic Irishmen who marched off to fight for the Union between 1861 and 1865, and he was one of those who never came home.

As a dependent of a deceased veteran, Jane was entitled to apply for a pension from the United States government. Hers is one of the thousands of Irish applications that are today preserved in Washington DC’s National Archives. Though they have lain largely untouched by Irish historians, it is a source that almost certainly represents the most detailed record of the lives of ordinary nineteenth-century Irish families to be found anywhere in the world.

Childbirth is a theme that occurs again and again in these files. Children were frequently referenced in the detailed statements that mothers and widows provided as they sought to prove their pension eligibility. Those who were unable to obtain a marriage certificate would often substitute baptism records to demonstrate relationships. When baptism records couldn’t be found, applicants called on the women who had nursed them through labour – invariably close relatives or members of the local Irish community – to provide affidavits. Offering up specific details about birthdates and birthplaces was encouraged, given that there was a $2 monthly supplement available to widows for each minor child. Taken together, this evidence provides glimpses into the story of childbirth among the diaspora and the harsh realities of life on the margins in Irish America.

Given the availability of the minor child supplement, many pension agents were prompted to ask Irish women and their friends if a marriage had produced offspring. As with Jane Murphy, their responses often laid bare the all too frequent loss of newborns. Some had experienced this heartbreak before they even finished their journey to America.

Famine-era emigrants James and Mary Carey celebrated the birth of their first child before they left Old Parish, County Waterford to cross the Atlantic, but by the time they reached their new home in Albany, they were alone again. Their son had "died on the passage out."

Despite its prevalence, the loss of a child was something to which Irish emigrants never became inured. When asked in 1862 if her ten-year marriage had led to any children, Catherine Eagan’s response evokes something of the deep sadness she must have felt, as "none of her children ever lived to be baptised." Such testimony serves as a reminder of the individual emotional traumas that underpinned high infant mortality rates.

They can also offer insight into the coping responses employed by bereaved parents. In 1858, Sarah McMullen and her husband celebrated the birth of a daughter, having previously lost their first-born girl. They decided to call their new baby Margaret, the same name they had given to her deceased elder sibling. Sarah explained that they did so "in memory of the first child." The couple lost three of their four children in infancy, tragedies that may well have contributed to the ultimate disintegration of their marriage.

Many ordinary Irish emigrants in mid-nineteenth-century America lived a precarious existence, often just one setback away from a potentially catastrophic change in circumstances. This was an environment that added considerably to the already substantial risks inherent in pregnancy and childbirth.

The experience of Limerick emigrant Hanora Hayes is a case in point. When Hanora became pregnant in 1861, she had already given birth to a number of children. But this time circumstances were different. Her husband John, struggling for work in their home of Rochester, New York, made the fateful decision to join the army. Although he must have hoped the move would secure their economic stability, the erratic nature of military pay consigned his wife and children to months without income. They were left to endure the harshest period of the year in "utter want," with only the intercession of an aunt saving them from the poorhouse.

Unable to get either the food or heat she needed, Hanora was left
"very feeble all winter." By the time she was facing into the final weeks of her pregnancy, she had developed a "hacking cough." Hanora finally went into confinement on Holy Thursday 1862, giving birth to healthy twin girls. But her weakened state and the exertion of childbirth meant that now "there was nothing left of her."

As the Sisters of Mercy came to pray over her each day, her brother rushed to be by her side. Finding her with "death … pictured in her countenance," there was little left for him to do, but to place the blessed candle in her hand and wait for the end. Hanora Hayes passed away at 3 o’clock on the morning of 26 April 1862. Shortly afterward, her husband in Virginia received news of a double blow – his wife was dead, and his children had been scattered across a number of institutions and an orphan asylum.

The miserable ordeal of Hanora Hayes is preserved in a letter submitted as part of a pension application. Occasionally, widows and other dependents put such correspondence forward as key supporting evidence to prove their eligibility. The majority of these letters were composed by husbands and sons in service. Most usually dominated by domestic concerns, they provide insight into the relationship dynamics between Irish men, women, and children in 1860s America. New babies – or the prospect of one’s imminent arrival – tended to occasion mention.

John Rohan was away with the United States Marine Corps when it came time for his wife to give birth. Though barely literate, the impending due date prompted John to pen a short note home. He expressed his hope that all was well, instructing his wife that "if a boy call him George and if [a] girl you can take the nam[e] your self."

Recent emigrant Edward Fitzpatrick from County Laois was in the trenches around Petersburg, Virginia when his wife Catherine sent news that he had become a first-time father in February 1865. The young couple had only wed the previous summer and Edward’s excitement was palpable. "You tell me there is a young son at home there," he wrote back. "I was very glad to hear of it if the Rebels will only lett me home safe to see him I would like to be home to see him." Though he tried to fill Catherine in on other goings-on, he soon returned to the subject that was most occupying his mind. "What ever you do take care of the boy till I ones [sic] gett home till I see him." When he finished his letter, he couldn’t resist adding a postscript: "Rite as soone as you gett this and lett me [k]now how the boy is a getting a long."

While the widows and dependent pension files offer what are often unique insights into the sometimes hard and unforgiving lives of ordinary nineteenth-century Irish people, those insights only came to be recorded due to a profound loss. All those who applied did so because of the death of a husband, son, brother, or father.

Just a couple of years after she had received Edward’s excited letter from Petersburg, Virginia, Catherine Fitzpatrick bundled it up with a number of others and made her way to the office of her pension agent. There she parted with them permanently, submitting them to the Federal government as proof of the couple’s relationship. Perhaps when she did so she brought along her young boy, Michael Edward, who had been born on 8 February 1865. Less than five months after his birth, typhoid fever had taken his father, who – despite his deepest wishes – would never get "home safe to see him."

*The above article is by archaeologist, historian, and curator Damien Shiels and is featured in "Birth and the Irish: A Miscellany," edited by Salvador Ryan and newly published by Wordwell Books. In a collection of almost 70 articles, a range of experts explore the experiences of birth in Ireland and among the Irish abroad, from the seventh century to the present day. 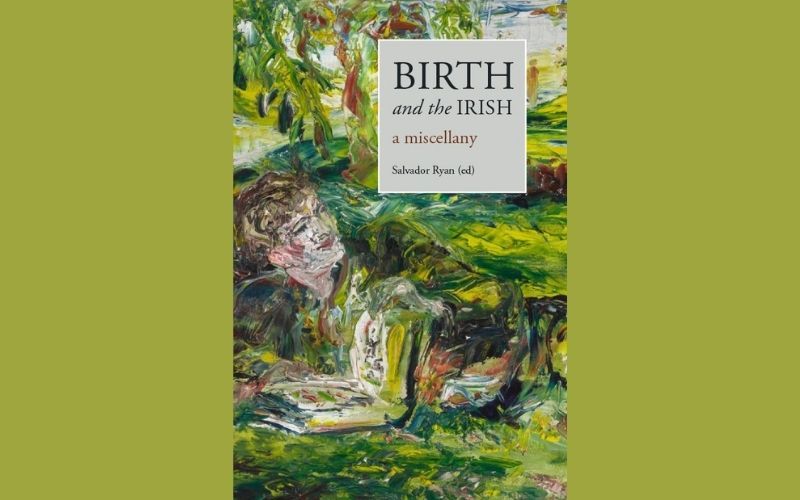 "Birth & The Irish" from Wordwell Books.