Irish Legend: The Song of Fionuala of the Children of Lir

Leon Ó Cathasaigh retells the Irish classic legend, a tale of love, sorrow, great loss and mourning... all with a bit of magic. 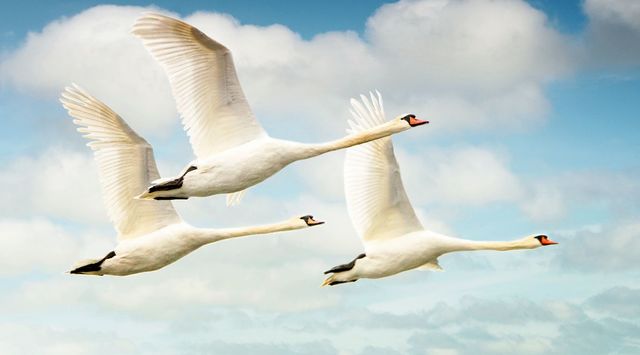 The Children of Lir. Getty

This legend from Irish mythology tells the story of Fionnuala and her three younger brothers, who were turned into swans by their jealous stepmother.

The old monk looked out across the western sea and smiled. He had come a long way to bring the message of hope and peace to these lands. The local people welcomed him into their lives and together they built a small church on a rocky hill overlooking the bay. He loved the simple life and relished each day as if it were his last.

As he passed between the reeds and shallows, he heard the faint sound of music in the distance. ‘What wonderful singing’ he thought and decided to seek out the magnificent voices. He followed the sounds and came to the shore of a calm sea inlet. Four swans swam there, each perfectly reflected in the still water, and each sang with human voice in perfect harmony with the others. He stayed there and listened and shed tears as he was greatly moved by the music.

For many days he went to the shore and became enthralled by the music. At last, one of the swans spoke to him; she said her name was Fionuala and the other swans were her brothers Fiachra, Aodh and Conn. They were the Children of Lir and as they swam close to the shore, she told the monk their story. And what a story it was!

Long ago, the Tuatha de Danaan, who were the oldest of the Irish peoples, had struggled to fend off the Gaels and retain control over their kingdom. Lir was a great warrior and general and he did much to defend the lands. However, when it came to deciding who would be the new king his rival Bov Deareg was selected. Lir was not pleased but he accepted the decision.

As appeasement, Bov encouraged his stepdaughter Eve to marry Lir. This worked out well, as the couple loved each other, and their union brought peace to the Tuatha de Danaan. It was not long before Eve gave birth to beautiful twins a girl Fionuala and a boy Fiachra. All was well, and after a time, the family were further blessed when two more sons, Aodh and Conn, arrived together. Alas as fate would have it, around that time also, Eve fell ill and died. Lir was heartbroken.

Bov had another stepdaughter, Aoife, and when he heard of Lir’s distress he encouraged her to marry Lir in place of her sister. It seemed like a good idea at the time but what a trail of woe resulted from that proposal. Lir loved his children, for they reminded him of Eve, and every night he told them stories of the land, the people and the other inhabitants. On the surface, Lir and Aoife seemed to get along but deep down, Aoife was unhappy with the attention he gave to his children. Aoife wanted more but Lir was still distraught at the loss of the children’s mother. It was not going to end well.

Aoife set off on a journey along the lakes with the children and a small retinue of servants. She claimed she was visiting her father Bov, but her real plan was to kill the children. At first, she asked the servants to do the deed, but they refused. She decided on an alternative. In the evening when the children bathed in the lake, she cast a spell to turn them into swans. Fionuala, the only girl among them realised what was happening; frightened and desperate, she pleaded with Aoife to put a time limit on the spell. Aoife’s meagre concession was to set the duration to nine hundred years.

So, the young swan-children were left alone on the lake all that time ago. Hearing the story so far, the monk was filled with sorrow and then rage. “How could she?” he exclaimed. “To children!”. Fionuala was silent. Finally, he asked “What happened next? What did you do?”

Fionuala continued, “I think back to those first days as I swam with my terrified brothers, in strange body, on a lonely lake. We were desolate and confused. Before long, we realised that although Aoife’s magic was powerful, it did not deprive us of our human voices. So, we began to talk and take stock of what happened and what we needed to do. Yes, from time to time we gave way to tears and sadness but after a while we realised that this was not much use to anyone. So, I created a song and gave it to my brothers, and we sing it all the time.”

The voices you hear, are the Children of Lir,

Forlorn we may be as the swans that you see.

The music we make, are the songs of the lake.

The story we tell, is a nine-hundred-year spell.

The wisdom we give, is the life that we live

The best we can be, by the lake and the sea.

Fionuala explained how Aoife’s dirty deed was exposed and she was punished by being transformed into a demon of the air for all time. She is still around in the restless drafts and chills you may experience from time to time. She has never settled, will never be calm and is best avoided.

In contrast, the Children of Lir became quite an attraction. In the evenings as the sun set along the shores of the lake, the Tuatha de Danaan would assemble to hear the Song of Fionuala. Their music had magic and beauty and brought comfort to all who heard it. For sixty years the people came, and the children were in good company. As time passed, the numbers grew fewer and at last the swans were all alone on the lake realising that the old peoples from which they came, had died out.

They moved twice, once to the Sea of Moyle between Ireland and Scotland. They had rough times, but they also had their song, their stories and each other. Time passed. After three hundred years they moved once again to the west coast where the monk sat now. In all, nine hundred years had passed since that fateful evening when they went to bathe in the lake. Fionuala finished her tale and the monk was overcome with admiration for the bravery and tenacity of the swans.

He asked them to go to the church with him so he could assemble the people and say mass. He wanted all to hear their beautiful singing for the glory of God. The bell called the locals to prayer and when they responded, they were surprised to see four swans beside the church. As the monk began the service, the children sang like angels and everyone was moved. At the same time, a strange transformation started; their swanlike bodies fell away and the true form of the Children of Lir was revealed. Alas, only for the briefest time, they appeared youthful and radiant. A moment later, the ravages of nine hundred years revealed itself upon their frail old bodies. It was clear they had not long left in this world.

The monk baptized them and blessed them and they died. The congregation caried their bodies to the graveyard and they were buried among the Christians. Since that time three things changed in Ireland. First, no decent person ever hunted or harmed a swan. Second, the stories of the old days of the Tuatha de Danaan were told and retold and especially among them, the Story of the Children of Lir. And finally, many’s the time, when people returned from lakes, they claimed to have hear the sound of singing and magical melody of the Song of Fionuala. “The wisdom we give is the life that we live, and the best we can be, by the lake and the sea.”

On this day: “Bloody Friday”, 22 bombs during worst day of Northern Ireland’s Troubles