A video conference connected the survivors of Ireland’s Mother and Baby Homes and Quebec’s Duplessis Orphans. 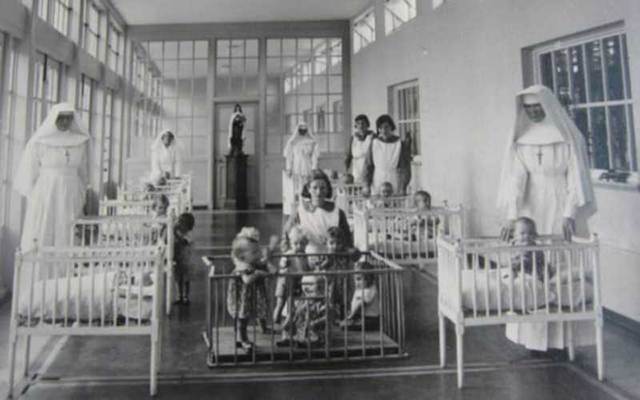 Children and nuns in a Mother and Baby Home.

Orphans on both sides of the ocean who were born to unwed mothers in the 1940s and 50s and left under the care of Catholic Church-run homes are sharing disturbingly similar stories of abuse, the Canadian Broadcasting Corporation (CBC) reports.

Canadian composer Alyssa Ryvers, who’d previously worked with the Quebec survivors by helping them share their stories through music, was the one who helped connect the Duplessis Orphans to the Irish survivors.

In March, Ryvers was in Ireland and happened to see a newspaper headline about the discovery of the mass grave of babies and children in Tuam, Co. Galway.

"I thought to myself, 'Oh my God, this sounds a lot like what happened here,'" Ryvers said.

After meeting with a group of survivors who'd lived in the Irish Mother and Baby Homes, she was struck by how similar their stories were to those of the Duplessis Orphans.

"Sitting around those survivors, it was the weirdest thing.... There was just this sort of sameness," she sad.

She said she hopes the first conversation between the two groups leads to something bigger.

"It seems clear that there were some parallels, and we could try to get to the bottom of why those parallels may or may not exist."

"It's going to be interesting to see how things unfold in the next while. I don't think it's the end of it," she said.

The parallels between the two groups of survivors are striking. The survivors from both groups have stories of physical and sexual abuse, of being forced to take medication and to perform hard labor. Survivors from both groups have birth records and medical documents declaring them mentally deficient. The stories are so eerily similar, they say, because the Church regarded them as “children of sin.”

"We never did nothing wrong to God. I didn't even know Him. My eyes weren't even open, I was in the stomach of my mother,” said Quebecer Louis-Joseph Hébert, or Nestor, as he prefers to be called.

"You never have a happy life. Nobody will know you. You will be the dirt of the society."

He was given the surname Hébert, just like every other baby born the same month as he was.

Nestor said he wishes he could cry about the abuse that he suffered during his childhood, but he can't. When he cried as a child, the nuns would beat him.

Orphans like Nestor who were born in or turned over to Church-run institution in the 1940s and 50s lived out their childhood, and some in their early adult years as well, in orphanages-turned-psychiatric institutions, reports CBC.ca.

The survivors were labeled as psychiatric patients as part of a plan by then-premier Maurice Duplessis to obtain federal subsidies.

In 2001, Bernard Landry, the Quebec premier at the time, offered compensation and apologized for the "sombre episode in our history."

In 2006, the government in Quebec said it would pay a further $26 million in compensation, but survivors were made to sign a waiver declaring they would not take legal action against the Catholic Church.

The church has never offered an apology to the Duplessis Orphans.