40 children died in the Easter Rising, some with the taste of chocolate in their mouths

The children murdered during the 1916 Easter Rising each have a tale and they deserve to be remembered as part of history. 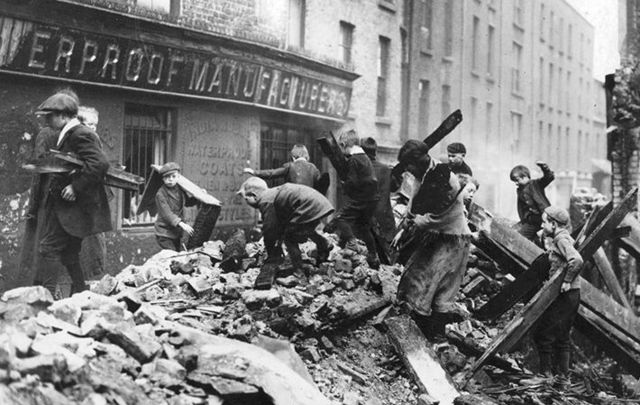 The children murdered during the 1916 Easter Rising each have a tale and they deserve to be remembered as part of history.

Editors Note: Author Joe Duffy takes time to examine the impact that the 1916 Easter Rising in Dublin had on children in his 2015 book 'Children of the Rising: The untold story of the young lives lost during Easter 1916.'

It takes less than a minute to recite the names of the forty children killed in the six-day 1916 Easter Rising - but this is the first time in one hundred years that it has been possible to do so.

Hard to believe that in Dublin city center as we know it now - between the North Circular and South Circular roads - from Heuston Station to the Custom House, 500 people lost their lives in that seminal week in our history a century ago.

Even today there is still not a full and accurate list of all those who died In the historic foundation of our state.

The majority of casualties were civilians - not surprising given that over 20,000 rifle carrying combatants battled it out in the warren of streets, lanes, alleyways of a bustling city center - where over 75% of the population of Dublin lived at the time.

Hardly surprising also that children who owned the streets of Dublin as their playground - that the wide-open welcoming spaces were a liberation from the cramped one-roomed conditions many of them lived in with their large families.

School was out that Easter week, so were the rebels, British soldiers, and the bemused population of a dull grey and poor city.

Out the children poured on that glorious Easter Monday morning, April 24, 1916, as 300 rebels marched from Liberty Hall, proudly past Wynn’s hotel, right turn into Sackville Street (even then many people called it O'Connell street) where, as the Angelus bell peeled from the nearby Pro-Cathedral, it signaled the start of the revolution. The most exciting day in Dublin in a lifetime.

As Connolly said to Pearse as they headed to the front door of the GPO - "did we ever think we'd live to see this day ?”

But the sound of breaking glass, shouts, screams, roars, and confusion was a magnet to the children; by weeks end, six of them would lie dead within 500 yards of the GPO, 34 of them within a few miles.

Within two hours, the iron clattering sound of galloping horses hooves on cobblestones echoed as the British Lancers, from the Linenhall barracks in nearby Bolton Street, charged headlong towards the GPO followed closely by barefooted waifs as they skittered, tore, and careered with their steel-wheeled homemade boxcars towards the excitement.

Sparks flew from their boxcars as they belted towards the excitement - after all a few scraps of wood, paper, coal, or stale bread was a daily treasure trove for poverty-stricken families.

Imagine the excitement as the confusion and fighting was breached by the crashing collapse of the front window of Noblett's sweet shop, in North Earl Street - suddenly a lifetime of longing for an Easter egg - or even the taste of sweet chocolate was within reach. And in they poured for the sole gorge of their lives - grabbing bonbons, jellies, licorice, and even the "hammer'' used to break up the shiny slabs of Cleeves creamy toffee, as the bewildered shopkeeper could only look on in shock.

I have no doubt that some of the children shot and killed that week fell with the first sweet taste of chocolate in their young mouths.

Nor were all the children from the tenements of Dublin, at least ten of the forty who died violently were from a well-off background. The family of William Lionel Sweny, in Lincoln Place, no doubt used their valuable and rare telephone - Dublin 1199 - to search for their missing 14-year-old, to no avail.

From nearby North Cumberland, John Kirwan went missing on Easter Monday. His distraught mother Annie pleaded on the front page of the Evening Herald nearly a month later on May 20 under the heading “this boy is lost” for information about her 15-year-old son last seen on Easter Monday afternoon, 100 yards from the GPO. He had laid, unrecognizable on a mortuary slab in Jervis Street Hospital for a month. His mother only identifying him by the lucky coin in his pocket he had gotten for his confirmation.

Each child has a story, a family an unfulfilled life - they deserve to be remembered. They are part of our history. One of the surprising results of the project to name, reclaim, and remember the children I have been engaged in for the past three years is being able to bring together relatives of the same child, who had never met before.

The project is driven in part by the poetic words of songwriter Declan O'Rouke who has proclaimed in his moving song on the children:

“Nor Pearse, nor Clarke, MacDonagh, or the Connolly we knew, would rest were they remembered on a pedestal alone. Are they not the fathers of our nation proud and free? And our sister and our brothers then, the Children of '16.”

*'Children of the Rising: The untold story of the young lives lost during Easter 1916' by Joe Duffy is published by Hachette Ireland and is available from online retailers and as an ebook.