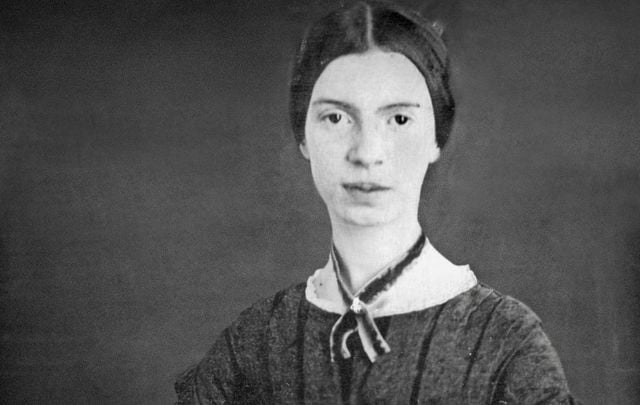 I started to take more of an interest in Emily Dickinson’s poems as a possible direction for my next writing and music performance project: the setting of melodies to Emily ‘s poems. The branding of my theatre troop is “Wilde Irish Women.” How to inject her into this tribe?

I canʼt really turn Emily into a Celt, no matter her love of Robbie Burns and her Caledonian capers through the house, imitating the Scots accent for which she had an ear by all accounts.

Itʼs been done before, so many times: the purloining of her poems for songs.

Would I be another in the commodification of the Emily Dickinson Choral, solo and more besides music for “Hope is the thing with feathers,” one of her most famous poems.

The Belle of Amherst Emily lived at a time of strict class distinction: servants and masters. I lived in Amherst myself for 18 years. Emily, a seminary-educated girl, would have little options outside marriage. Her life of the mind was entirely set in the domestic arena of the house and its smooth and orderly running.

No surprise then that Murrayʼs interest was in the life of Emily’s Irish servant Margaret Maher.  Murray wrote about Emily Dickinsonʼs life below stairs. Emily shared the kitchen with her Irish domestic Margaret for 17 years. Her relationship with Margaret, an immigrant from Tipperary, was one of shared domesticity and ease with each other that promoted trust and perhaps friendship.

Margaret took on many of the household chores leaving more time and space for Emily to write… and write she did. Over 2,000 poems and letters, some on chocolate wrappers, bills of lading, scraps of paper - on whatever she could grab and write - to keep pace with her fast, furious, fertile and brilliant imagination.

Murray wouldnʼt be the first person to look for connections with the peripatetic Irish‘ and to connect people of accomplishment with the Hibernian diaspora, especially with literary genius.  Words are a national sport for the Irish and the idiom and vernacular she sought to find in Emily‘s poems do seem to be there lurking and waiting for Aoife to discover what she is after. She works to find the ghost of Margaret Maher. She believes in her influence and idiom.

In Poem 1300, I love that Murrayʼ stumbles on the use of “himself,” a very specific Irish title of affection for a male relative:

Silence is all we dread

There is ransom in a voice

Himself have not a face

Then there is the influence of Robert Burns, also in a Scottish idiom. The different syntax and color of the Scots Gael similar in lyricism also can be found in the poems.

It is a bit of a shameless urge that we Irish pursue evidence of our own cultural tribal reach and influence in a world where we were once downtrodden and now have risen to golden global heights becoming leaders of letters and the performing arts. We are in imminent danger of committing that deadliest of deadlies: the sin of pride.

When Margaret Maher left Tipperary for America, she had not escaped the poverty of post-famine Ireland. She escaped the famine itself.

Between 1845 and 1847, the population of Ireland declined from 10,000,000 to 6,000,000. Two more million were lost to subsequent emigration. The famine, itself the catastrophe of mismanagement as well as indifference to the starving Irish who had to rely on one crop only to live on since the other crops were the means of paying rent to the landlords who had taken over the very land that was not their heritage and to which the English had no right rightful claim anyway. When it came to land rights, the sword proved mightier than the pen.

When the potato crop failed, starvation stalked the land. Yet departure to America did not always assure safe passage or a happy landing. Many died at sea and the macabre name for the sailing vessels—coffin ships—told the tale of more misfortune and misery.

Margaret, it would seem, had more resources than the average Irish person arriving in New York. She had the means to make it to Amherst and was healthy enough to be taken into the employ of the Dickinsons. She indeed arrived to the right household.  Even as a humble domestic worker, she had a simpatico with her employers’ daughter as she herself also had a flair for writing. She shared this interest with Emily who by all accounts encouraged her. It mustʼve been a great relationship of trust since Margaret had the honor of hoarding Emilyʼs poems in her trunk when she later sailed across the Atlantic after her mistress’ death.

Emily was notoriously private. She did not appear to have much interest in sharing her genius with the world. She had only seven poems published in her life. She instructed her sister Lavinia and Margaret to burn her poems after her death. Lavinia followed her instructions and burned many, but kept others for later publication. Margaret, by some innate canny instinct and judgment, valued the poems more than her promise to Emily: she did not burn any that she had in her trunk. She also makes sure that the one and only daguerreotype of Emily did not go up in flames.

When I read Aoife Murrayʼs book, Maid as Muse, especially the poem “Silence is all we dread,” I wonder: is this the voice of Margaret Maher working side-by-side with Emily, possibly making a cake and wanting to chat and Emily silent lost somewhere in her next poetic reverie? I imagine Margaret saying, “Please talk to me, Emily. You havenʼt spoken a syllable to me all morning, you know. While weʼre baking, I like to chat especially when weʼre making cakes.” But Margaret, she left you this poem. I felt she left a song and there it was, a melody right away: writing itself.

I can hear it in the voice of Brooke Steinhauser, my wonderful collaborator, and singing muse. I hear her voice in my head and my songwriting cylinders fire up and in no time at all thereʼs a new song.

Brooke is the rightful heir to this project.

She has been in love with Emily all her life.

Tattooed on her arm?

Brooke has been in all five Wilde Irish Women shows. After completing her Masters in Museum Studies in Cooperstown, she took a job in Portsmouth, New Hampshire, managing two historic houses. But finally, she came back to her dream job as  Program Director of the Emily Dickinson Museum where she currently works.

I am more comfortable now with this new direction—“The Celtification of Emily.”  We have rehearsed some of the songs and happily, they have left Emily and me to now belong to our singer Brooke. We plan a recital soon.

We need to cast a Margaret Maher and Iʼm working on giving her a voice: her own songs and a rightful place in the story of how she had the biggest hand in “The Celtification of Emily Dickinson." Stay tuned.