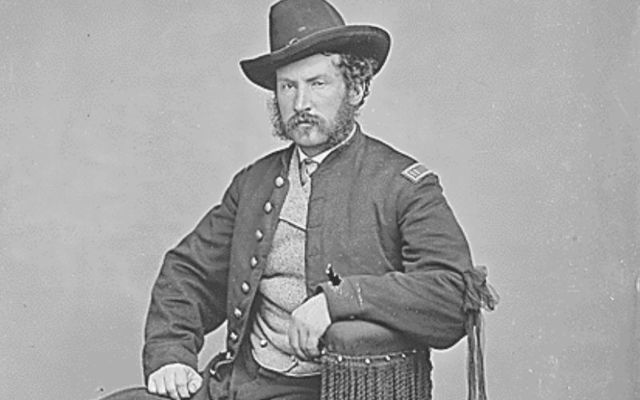 Most people will know the name John Wilkes Booth, the man who assassinated America's 16th President Abraham Lincoln, on April 14, 1865, but how many know the name of the Irish man who cornered the villain?

Edward P. Doherty is one of the unheralded heroes of Irish American history, the man who tracked down Lincoln’s assassin John Wilkes Booth. He was fiercely and proudly Irish, enlisting in the Irish Brigade during the Civil War. He was born September 26, 1838, in Wickham, Canada East, to immigrant parents from County Sligo.

He came to New York in 1860 and was living there when the American Civil War broke out. He enlisted in a 90-day militia unit and was assigned as a Private to Company A of the 71st New York Volunteers on April 20, 1861. He was assigned to Colonel Ambrose Burnside's 2nd Brigade in Brigadier General David Hunter's 2nd Division, he was captured by the Confederates during the First Battle of Bull Run, the first major land battle of the American Civil War which took place on July 21, 1861, near Manassas, VA. While a prisoner, he made a daring escape. Ultimately, the 71st Regiment, along with Doherty, mustered out on Aug 9, 1861.

Doherty went on to become a Captain in the Corcoran Legion, formed by fellow prisoner from the First Battle of Bull Run, Irish-American General Michael Corcoran, who was a close confidant of Abraham Lincoln. Doherty served for two years before being appointed First Lieutenant in the 16th New York Cavalry on Sep 12, 1863. The regiment was assigned to the defense of Washington, D.C. for the duration of the war, where Doherty distinguished himself as an officer.

Doherty’s path crossed with John Wilkes Booth, the man who assassinated President Abraham Lincoln after the war was over. According to Eyewitness to History.com on the night of April 14, 1865, Booth shot the president and then fled the screaming pandemonium he had just created by flinging himself over the wall of the Presidential Box at Ford's Theater. Behind him lay an unconscious and dying President Lincoln, a .50 caliber bullet lodged in his brain.

As he plummeted through the air, Booth caught his foot on the bunting decorating the front of the presidential box, lost his balance and crashed onto the stage floor below. Ignoring the pain from his broken left leg, Booth, ever the actor, hobbled to his feet and ran to the back of the stage, stopped and delivered his last line on stage, "Sic Semper Tyrannis." (Thus always with tyrants.) Booth then disappeared into the night.

Booth fled south on horseback and, after meeting with one of his co-conspirators, David Herold, collected a stash of supplies from the Maryland inn run by a woman named Mary Surratt. With his leg in need of medical attention, Booth and Herold went to the house of a Dr. Samuel Mudd to have his leg set. After Mudd ordered them off his property, they were briefly helped by a variety of Confederate soldiers and sympathizers as they made their way towards the Potomac to cross into Virginia. Once across, they sought refuge in a barn on the farm of Richard Garrett.

It was there almost two weeks after Lincoln was shot that Union soldiers of the 16th New York Cavalry found Booth and Herold.

The following is Lt. Edward P. Doherty’s account of what happened, which Eyewitness History adapted from an article Doherty wrote for Century Magazine in 1890, titled “Pursuit and Death of John Wilkes Booth”.

On April 24, 1865, Lieutenant Edward Doherty sits on a bench across from the White House conversing with another officer. The arrival of a messenger interrupts the conversation. The messenger carries orders directing Doherty to lead a squad of cavalry to Virginia to search for Booth and Herold. Scouring the countryside around the Rappahannock River, Doherty is told the two fugitives were last seen at a farm owned by Richard Garrett. Doherty leads his squad to the farm arriving in the early morning hours of April 26.

"I dismounted, and knocked loudly at the front door. Old Mr. Garrett came out. I seized him, and asked him where the men were who had gone to the woods when the cavalry passed the previous afternoon. While I was speaking with him some of the men had entered the house to search it. Soon one of the soldiers sang out, 'O Lieutenant! I have a man here I found in the corn-crib.' It was young Garrett, and I demanded the whereabouts of the fugitives. He replied, 'In the barn.' Leaving a few men around the house, we proceeded in the direction of the barn, which we surrounded. I kicked on the door of the barn several times without receiving a reply. Meantime another son of the Garrett's had been captured. The barn was secured with a padlock, and young Garrett carried the key. I unlocked the door, and again summoned the inmates of the building to surrender.

"After some delay Booth said, 'For whom do you take me?'

"I replied, 'It doesn't make any difference. Come out.'

"I said, 'I know who is with you, and you had better surrender.'

"He replied, 'I may be taken by my friends, but not by my foes.'

"I said, 'If you don't come out, I'll burn the building.' I directed a corporal to pile up some hay in a crack in the wall of the barn and set the building on fire.

"As the corporal was picking up the hay and brush Booth said, 'If you come back here I will put a bullet through you.'

"I then motioned to the corporal to desist, and decided to wait for daylight and then to enter the barn by both doors and over power the assassins.

"Booth then said in a drawling voice. 'Oh Captain! There is a man here who wants to surrender awful bad.'

"I replied, 'You had better follow his example and come out.'

"His answer was, 'No, I have not made up my mind; but draw your men up fifty paces off and give me a chance for my life.'

"I told him I had not come to fight; that I had fifty men, and could take him.

"Then he said, 'Well, my brave boys, prepare me a stretcher, and place another stain on our glorious banner.'

"At this moment Herold reached the door. I asked him to hand out his arms; he replied that he had none. I told him I knew exactly what weapons he had. Booth replied, 'I own all the arms, and may have to use them on you, gentlemen.' I then said to Herold, 'Let me see your hands.' He put them through the partly opened door and I seized him by the wrists. I handed him over to a non-commissioned officer. Just at this moment I heard a shot, and thought Booth had shot himself. Throwing open the door, I saw that the straw and hay behind Booth were on fire. He was half-turning towards it.

"He had a crutch, and he held a carbine in his hand. I rushed into the burning barn, followed by my men, and as he was falling caught him under the arms and pulled him out of the barn. The burning building becoming too hot, I had him carried to the veranda of Garrett's house.

"Booth received his death-shot in this manner. While I was taking Herold out of the barn one of the detectives went to the rear, and pulling out some protruding straw set fire to it. I had placed Sergeant Boston Corbett at a large crack in the side of the barn, and he, seeing by the igniting hay that Booth was leveling his carbine at either Harold or myself, fired, to disable him in the arm; but Booth making a sudden move, the aim erred, and the bullet struck Booth in the back of the head, about an inch below the spot where his shot had entered the head of Mr. Lincoln. Booth asked me by signs to raise his hands. I lifted them up and he gasped, 'Useless, useless!' We gave him brandy and water, but he could not swallow it. I sent to Port Royal for a physician, who could do nothing when he came, and at seven o'clock Booth breathed his last. He had on his person a diary, a large bowie knife, two pistols, a compass and a draft on Canada for 60 pounds."

Booth's body was carried up the Potomac and buried beneath the floor of a penitentiary in Washington, DC. David Herold was tried with three other conspirators. All were found guilty, including Mary Surratt, owner of the tavern where Booth stopped, were hanged on July 7, 1865.

After the war, Doherty set up a business in New Orleans before returning to New York, where he worked as Inspector of Street Pavings until his death in 1897 at the age of 59. In his later years, he was twice Grand Marshal of the Memorial Day parade and resided in Manhattan at 533 West 144th Street. He is buried in Arlington National Cemetery.