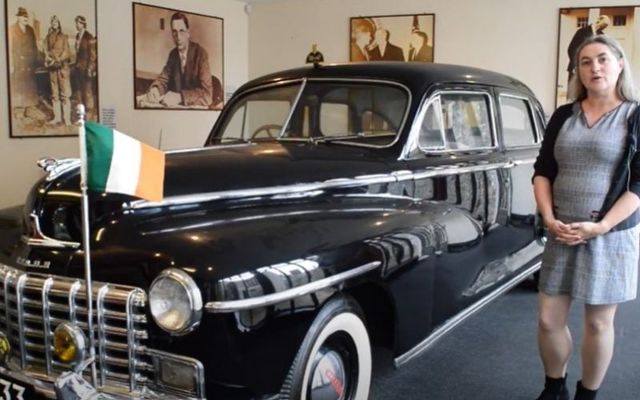 At two-ton and eight-passenger capacity, this car was a favorite of two Irish presidents who liked to take the wheel regularly.

The 1947 Dodge D24 limousine was originally colored 'military maroon' (Chrysler) and purchased new as the personal car of the then Irish President Seán T. Ó’Ceallaigh. It was acquired by another famous Irish political figure Éamon de Valera who later became President.

While both did their formal events in the Presidential Rolls, on their days off UK building cars were not their choice. Both had done numerous visits to the US and seemed to be impressed by the big bumpered autos from Motown.

A product of American post-war plants, these cars were a huge success at the time, and their production exceeded two million units between 1946 and 1948.

Much sought after for its elegance and performance, buyers of the time most appreciated the comfort and durability, seeing it as a true family vehicle. As a result, many of these cars were exported due to their good constructive qualities, with some winding their way to Ireland. In 1946 the retail price for the regular D24 started at $1,389.

President Ó’Ceallaigh drove this top-of-the-range Dodge limousine for 12 years until his presidential term ended in 1959. That same year Éamon de Valera, himself a former head of government and legendary Irish political figure, purchased it for his own personal use and had it painted black. At 5.74 meters (226in) long and 1.9 meters (75in) wide this teardrop and torpedo in design Dodge was big and presidential.

Since 1988 it has been kept at the de Valera Library in Ennis, County Clare after being passed on to the local council by his descendants. It sustained heavy damage following flooding of the display room during the 2009 winter floods.

In 2011, Clare County Councillor and skilled motor mechanic P.J. Ryan donated his time and expertise to restore the historic car. For Ryan, the restoration was a labor of love - free of charge. With the help of Clare native Danny Moloney, who now lives in New York, Ryan sourced an original set of Whitewall tires and a six-volt battery from America.

He made original repairs to the brakes, exhaust, steering and bodywork. David Browne of John Browne’s Auto Bodyshop in Cratloe generously assisted with restoring the bodywork as well.

The Dodge is on display at present in a room adjacent to Ennis library at Harmony Row. It will be re-located to a purpose-built room at Clare County Museum, Arthur's Row, Ennis.

The de Valera car with its right-hand-drive limousine configuration is a rare beast. In fact from our research there seem to be few others like it in the world. One source says there were only two built. So when visiting and viewing this unique and beautiful vehicle you are experiencing history from a number of perspectives.