An Irish chemist named Dr. James J. Drumm created battery-powered trains, which successfully operated on a Dublin to Bray route from 1932 to 1948. 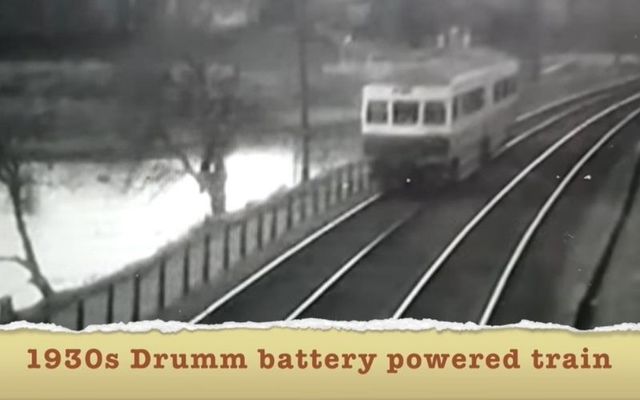 Transport historians 'Ireland Made' look into the fascinating history of the Irish chemist who created the Drumm Battery Train.

Dr. James J. Drumm was an Irish chemist who did advanced research into the development of powerful traction batteries at University College Dublin (UCD). He completed his college education in 1918 and worked in the industry in the UK and Ireland up to 1925 when he started his research work at UCD.

Drumm was working in the Experimental Physics Laboratory under Professor John J. Nolan, Head of the Department and also an adviser to the Irish Ministry of Industry and Commerce. Drumm was also working on his Ph.D. proposal for a new type of battery chemistry.

In 1929, Drumm applied for a patent on an improved alkaline battery which combined many of the advantages of both alkaline and lead-acid cells. The chief feature of this new chemistry was the high charge and discharge rates achieved.

In comparison to contemporaries (notably from the Edison Battery Company), the Drumm battery could charge four times as fast, and discharge up to three times as fast, making strong acceleration and regenerative braking. The Drumm invention was first made public and attracted widespread interest, not just here in Ireland but across Europe and in the US.

The Drumm train project was given £27,000 and the Drumm Battery Company was formed. In 1930, a small four-wheeled petrol-driven railcar was modified at the Inchicore rail works. Trial runs showed that the train could attain a speed of 80 kph (50 mph) within fifty seconds of the start.

A speed of 88 kph (55 mph) it is stated, was maintained for the greater part of the journey from Dublin to Bray. In February 1932 the Drumm battery train was charged at Inchicore and went on a test run to Portarlington and back — a total distance of 130 kilometers (80 miles) — on the single charge. This was repeated several times after which the train went into regular service.

Four Drumm Battery train units operated successfully on the Dublin to Bray section of the line with occasional runs to Greystones some five miles beyond, from 1932 to 1948.

During 'The Emergency' years (WWII 1939-1945), coal and petrol shortages affected steam locomotive and road transport. This meant that the Drumm trains had increased use. The impact of the war had a knock-on effect on the company, as they were unable to source raw materials for the batteries and secure orders for the Drumm Traction Battery system. Electricity shortages also occurred on the Shannon due to low water levels and this affected the Drumm trains.

By the summer of 1944 the Minister for Industry and Commerce, Sean Lemmas was non-committal about prolonging the life of the Drumm trains.

A decision was taken to withdraw the trains from service on the 12th July 1949, when the last Drumm train left Bray. All four railcars were converted at Inchicore to ordinary passenger stock and were hauled by steam locos. In the mid-1950’s they were withdrawn and replaced by new diesel railcars. These pioneering railcars were scraped between 1957 and 1964.