Did the Irish bomb the 1939 New York World Fair?

Epic new novel 'The World of Tomorrow' by Brendan Mathews and a blast from the past during World War II. 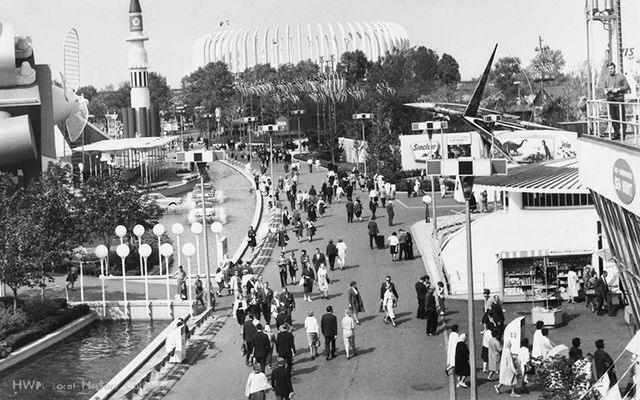 Brendan Mathews explores Irish immigration and assimilation, all the while accompanied by the chatty ghost of a famous Irish writer, in his epic new novel The World of Tomorrow.

This sweeping saga is set in Ireland as well as New York City right before World War II, and culminates in the World’s Fair held in Queens in 1939.  At a time when the world seemed to be descending into warfare, many believed the fair might be a last chance to celebrate a more civilized way of life.

But as compelling as Mathews’ book is -- it follows three Irish immigrant brothers trying to escape their violent pasts -- the author chose to not incorporate an equally fascinating, not to mention tragic, event that actually did happen at the World’s Fair.

Cover for Brendan Mathews novel "The World of Tomorrow."

In this sense, fact is as fascinating as fiction.  And when all was said and done, an Irish American cop was killed. And some suspect it was because the ancient “troubles” plaguing Ireland actually made their way to America.

Which is why it’s a little funny these days when people gripe about today’s immigrants who bring their old-world troubles to America.  Whoever caused trouble at the World’s Fair, it was likely yesterday’s immigrants, who many claim were so much better behaved than today’s.

The World’s Fair opened in April of 1939 in Flushing Meadows-Corona Park on the outer edges of Queens.  Over 30 countries participated, and the overarching theme of the fair was the exciting future.  (Hence the title of Mathews’ novel.)

But it was also hard to ignore the fact that Adolf Hitler had already assumed full control in Germany and built up his country’s military.  Another global military fight -- World War I had concluded just two decades earlier -- was looming.

And though many Americans were not interested in participating in another European war, whether or not America could actually stay out of the war was another question.

Things took a turn for the worse when Hitler invaded Poland five months into the World’s Fair celebration. (It lasted over a year, welcoming over 40 million visitors.)  Britain and France were swiftly drawn into the war, and it looked like carnage was again going to engulf Europe.

America managed to stay off the battlefield, at first, but make no mistake: America was very much engaged in the war.  And though many Irish Americans like to brag about how patriotic they have always been, some, at the time, were skeptical about stepping up to help the Brits.  (Ireland, of course, stayed neutral during the war.)

There was an even stronger streak of isolation among German Americans.  This is important to remember when we consider what happened at the World’s Fair on July 4, 1940.  Independence Day.

That was when detectives -- including Irish American Joseph Lynch -- from the NYPD’s Bomb and Forgery Squad were called to the World’s Fair British Pavilion to investigate a bag that was emitting a ticking sound.

“Lynch took out a pocketknife and carefully slit open a two-inch hole in the bag as his partner knelt down to look inside and saw what appeared to be dynamite,” a 2015 article in The New York Post noted.

“‘It’s the business,’ Lynch reportedly said -- and the bomb exploded seconds later,” added the Post, in an article marking the 75th anniversary of Lynch’s murder.

No one was ever arrested in the bombing, but the Irish Republican Army was an immediate suspect given that the bomb was planted at the British Pavilion.

But the Irish were not the only suspect immigrant group.  German Americans -- especially a pro-Nazi organization known as the Bund -- also were suspected in the bombing, with some believing this a way to show Americans the cost of war, and thus keeping them out of the fight in Europe.

Or did British agents do it to get Americans into the war?

Either way, 10 year-old Essie Lynch had to bury her father.