Did JFK's Irish driver cause his death? 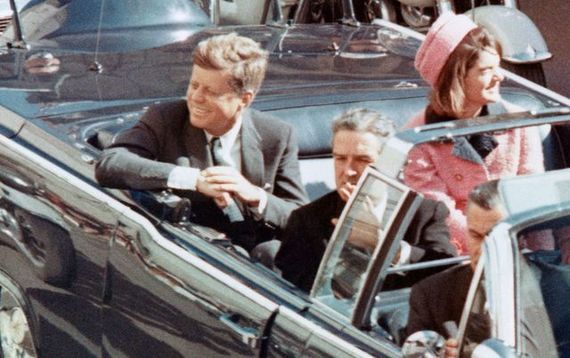 John F. Kennedy in the motorcade just before he was killed on November 22, 1963, in Dallas. Getty

There has been speculation that the actions of President John F. Kennedy's driver, Tyrone-born William Greer, played a part in his death.

Despite his assassination being decades ago, the mystery and drama of John F. Kennedy's life and death continue to intrigue many people.

There are many Irish links to the Kennedys, one of the most famous Irish American families, but one Irish man, in particular, may have played a less than favorable part in young Jack Kennedy's death.

The book "The Kennedy Detail: JFK's Secret Service Agents Break Their Silence", which includes contributions from Clint Hill, the secret service agent closest to President John F. Kennedy on the day of his assassination, also focuses on another member of the detail: The President's driver, William Greer, a native of County Tyrone.

William Greer was born in County Tyrone, Ireland, in 1910. His family came to the United States when he was quite young. He joined the Navy and later joined the Secret Service and worked as a driver for Truman, Eisenhower, and Kennedy.

Greer’s actions the day JFK was killed remain controversial, so much so that some crazed conspiracy buffs have claimed that he was the one to shoot Kennedy because he was an Ulster Protestant who disliked Kennedy’s Catholic faith - a fact his son admitted to. The truth is that Greer acted badly once the shots rang out.

Instead of accelerating, as he was trained to do, Greer actually slowed the car down to a near stop, before he was forced to accelerate by Clint Hill who screamed at him to get to a hospital. Greer subsequently said that he did accelerate but the famous Zapruder home movie proves the case against him as well as numerous eyewitnesses.

Kenneth O'Donnell (special assistant to Kennedy), who was riding in the motorcade, later wrote: "If the Secret Service men in the front had reacted quicker to the first two shots at the President's car, if the driver had stepped on the gas before instead of after the fatal third shot was fired, would President Kennedy be alive today?"

He also stated that after the death of the president, "Greer had been remorseful all day, feeling that he could have saved President Kennedy's life by swerving the car or speeding suddenly after the first shots."

Senator Ralph Yarborough was riding with Vice President Lyndon B. Johnson and was very critical of the response of Greer: "When the noise of the shot was heard, the motorcade slowed to what seemed to me a complete stop."

"The cars all stopped ... I don't want to hurt anyone's feelings but for the protection of future Presidents, they (the Secret Service) should be trained to take off when a shot is fired."

Greer later denied he had stopped the car on that fateful day.

He said, "I heard this noise. And I thought that is what it was. And then I heard it again. And I glanced over my shoulder. And I saw Governor Connally like he was starting to fall. Then I realized there was something wrong. I tramped on the accelerator, and at the same time Mr. Kellerman said to me, 'Get out of here fast.' And I cannot remember even the other shots or noises that was. I cannot quite remember any more. I did not see anything happen to me anymore because I was occupied with getting away."

His son, Richard Greer, was interviewed in 1991 and added to the conspiracy theory. When asked, "What did your father think of JFK?" Richard responded: "Well, we're Methodists... and JFK was Catholic...”