The ruins and buried remains of a 13th-century Cistercian farm have been discovered at Beamore in County Meath. 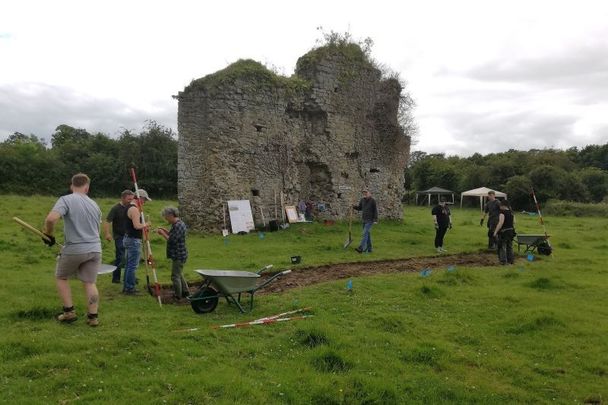 The excavation team getting to work at the site in Beamore, Co Meath in July 2019. Beaubec Excavations @BeaubecE, Twitter

A County Meath farmer had a hunch that there was something special about the land his family has worked for over 200 years.

He was right: archaeologists have confirmed that it is the remains of 13th-century Cistercian monks’ settlement, likely unique to Ireland.

More than 25 years ago, John McCullen was working the land at his farm in Beamore, Co Meath, when a window fell from one of the ruins that dotted his property.

He climbed up the ruin to put it back and noticed a few unusual things: one of the building materials was red sandstone, which isn't available locally, and there were pigeon boxes, which had been used by people in the 16th and 17th centuries.

A Farmer in County Meath made a 'hugely significant' discovery after requesting that excavations be undertaken at the site of an old ruin in one of his fields. The excavations revealed the remains of a 13th-century Cistercian monks’ settlement that is ‘v… https://t.co/btRuCvSeFQ pic.twitter.com/o4MgsQbvKt

As a 2019 Irish Times profile details, McCullen had long heard stories about a Georgian landlord, a linen mill, and a monastery dating back centuries earlier. But what was the real history of his family's land?

With the help of archaeologists Matthew and Geraldine Stout, he secured a €50,000 grant from the FBD Farm Trust to be distributed over the course of three years - provided the first month of excavation proved that the site was of significant interest.

McCullen can now rest assured that his land is of archaeological and historical importance.

The Cistercians are a Catholic order of monks and nuns who branched off from the Benedictines, originating in France.

Geraldine, who had also excavated Bective Abbey in Meath, another Cistercian site, said: “We knew this monastery was somewhere in the area, but you are talking about hundreds of acres of land. It was the medieval window that was the key to it. The geophysical survey indicated earlier buildings that were not marked on 19th-century maps, and monumental walls suggested a building larger than a house.“

"Our job as archaeologists is to reconstruct how people lived through what they left behind. The French pottery told us that there was a link to France and that we were in the right place. The discovery of a corn-drying kiln and preserved wheat, oats, and peas indicated the practice of crop rotation, which the Cistercians brought to Ireland.

“They were also famous for their gardens, and we unearthed plum stones as well as blackberries and elderberries.”

The team of archaeologists kicked off their mission at Beamore, Co Meath in July 2019, and has been chronicling their progress over on their Beaubec Excavations blog.

Trench B "The Beatles" pic.twitter.com/tO6a7faB18

These and other historical findings led them to conclude that the Beamore monastery was an especially important site - established as a farm for the Cistercian motherhouse in France, associated with the French Cistercian foundation of De Bello Becco (Beaubec).

“What is quite exceptional is that a whole community came all the way from France and set up in Ireland to farm,” Geraldine told the Irish Times.

“Other Cistercians came here and founded an abbey with model farms around it but this community’s abbey was back in France, to where they exported their produce via Drogheda’s very busy port. I can’t think of any other place in Ireland that the Cistercians farmed here and maintained such a close relationship with their abbey in their homeland."

McCullen, who also works as a local historian and author, is overjoyed by the findings.

“I’m delighted. I knew in my heart and soul that there was something special about the ruin and now we’ve found it," he said.

You can watch McCullen discuss the amazing discovery with Agri Aware back in 2019 here:

Director of FBD Trust, Meath farmer and Agri Aware Board Member; John McCullen recently discovered a 13th century Cistercian farm, ran by French monks on his land in Beamore!🌱👨‍🔧 Amongst the many wooden pieces, seeds and pottery items discovered at the site, there is also evidence of agricultural crop rotation – perhaps one of the first signs of modern agriculture in the Boyne Valley and possibly Ireland! 😊 #HeritageWeek

The Monaghan man who filmed the devastation of Nagasaki and Hiroshima