IrishCentral’s Book of the Month: “Belonging: A Memoir” by Catherine Corless

For October, join the IrishCentral Book Club as we read the bestseller “Belonging: A Memoir” by Catherine Corless. 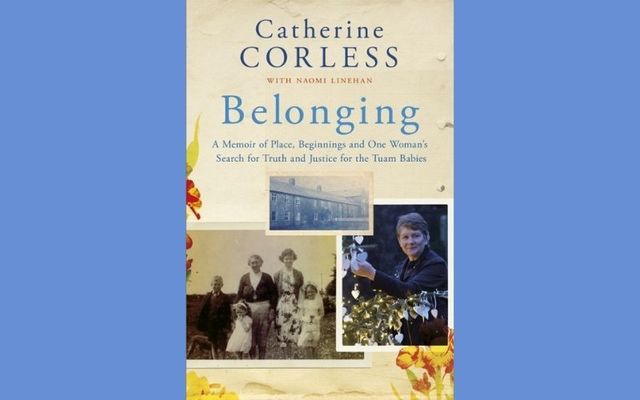 "Belonging: A Memoir" by Catherine Corless is the October selection for the IrishCentral Book Club. Hachette Ireland

“Belonging: A Memoir” by Catherine Corless and written with Naomi Linehan is the October selection for the IrishCentral Book Club.

Throughout October, we’ll be reading “Belonging: A Memoir of Place, Beginnings and One Woman's Search for Truth and Justice for the Tuam Babies" by Catherine Corless, the Irish amateur historian credited with uncovering the scandal at the Tuam Mother & Baby Home in Co Galway.

“Belonging” was published by Hachette Ireland in September 2021 and is available in paperback, ebook, and audiobook formats. Since being published, it has become one of Ireland's best-selling books.

Happy Publication Day to the powerhouse Catherine Corless who continues to fight for justice for the Tuam babies and their families. Her memoir #Belonging publishes today! pic.twitter.com/zci8p0Qrm8

Synopsis for “Belonging: A Memoir” by Catherine Corless

Catherine Corless could not have known where her interest in local history would lead her, as she began researching the Tuam Mother and Baby Home in Galway in 2010. Uncovering no less than 796 missing burial records of children born there, the stark truth of their place of rest became clear: a disused sewage tank on the old home site, where two boys had once stumbled upon bones.

But who were these lost children, and what had happened to them in the care of the Bons Secours order of nuns?

Determined to know more, Catherine’s painstaking research led to a quest for justice that continues still as, often against fierce resistance, she brought to light a terrible truth that shocked the world, impacted the Vatican, and led to a Commission of Investigation in Ireland.

Part memoir, part detective story, Belonging is both a personal account – of identity, beginnings and Catherine’s search for her own mother’s lost story – and a recounting of her forensic crusade on behalf of the lost babies of Tuam. It speaks to the tender love of a mother and her child; to the unforgettable screams which echoed through the corridors as babies were taken against the parent’s will; and to a mystery which continues to this day, as so many still search to know where, and to whom, they belong.

Reviews for “Belonging: A Memoir” by Catherine Corless

"This is as much a story of the living as the dead." - The Irish Independent

"Corless has done us a great favour in her relentless campaign to give voice to the voiceless, and for being so incredibly honest about her own experience of mental health difficulties. With the latter, she has opened up another taboo subject that badly needs airing. " - The Irish Times

About the author Catherine Corless

Catherine Corless is married to Aidan, and they have four children, Adrienne, Alan, Alicia, and Aaron, and nine grandchildren. Her quiet, secluded life – rearing a family, farming, gardening, and enjoying her pastimes of art, crafts and family history research – changed drastically in 2014, after some research she had done into the Bons Secours Mother and Baby Home at Tuam was picked up by media and exposed worldwide.

Her research revealed the harshness, cruelty, and discrimination of the mothers who gave birth there, and their offspring. It also revealed the terrible secret of 800 babies who had died at the Home from 1925-1961, whose remains had been laid in a defunct sewage tank.

Resulting from this revelation, the Irish government was pressurised into setting up a Commission of Investigation into all Mother and Baby Homes in Ireland, whose final report was issued in January 2021.