IrishCentral’s Book of the Month: “Did Ye Hear Mammy Died?” by Séamas O’Reilly

For September, join the IrishCentral Book Club as we read the bestseller “Did Ye Hear Mammy Died?” by Séamas O'Reilly. 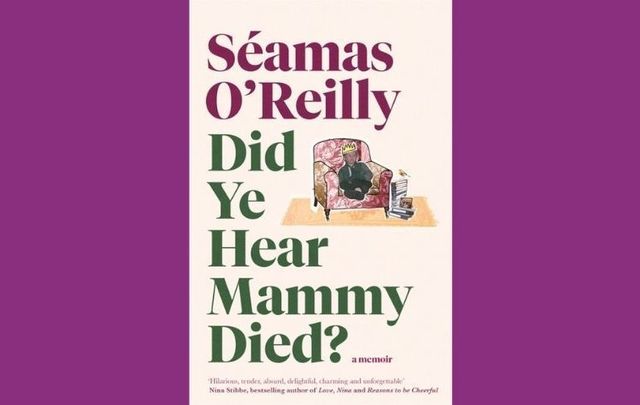 “Did Ye Hear Mammy Died?” by Séamas O’Reilly is the September selection for the IrishCentral Book Club.

Throughout September, we’ll be reading “Did Ye Hear Mammy Died?” by Séamas O’Reilly, which became a #1 Irish Times bestseller during its first week of publication.

First published in July by Fleet, "Did Ye Hear Mammy Died" is now available in hardcover, ebook, and downloadable audiobook.

DID YE HEAR MAMMY DIED IS OUT THIS WEEK!

On THURSDAY JULY 22nd, you can finally buy my memoir of growing up with ten siblings and a widowed dad in '90s Derry. I hope you do because it's very funny and extremely cool but DON'T just take my word for it: all these people agree too. pic.twitter.com/4d6pW5dz5f

Synopsis for “Did Ye Hear Mammy Died?” by Séamas O’Reilly

Séamas O’Reilly’s mother died when he was five, leaving him, his ten brothers and sisters, and their beloved father in their sprawling bungalow in rural Derry.

It was the 1990s; the Troubles were a background rumble (most of the time), and Séamas at that point was more preoccupied with dinosaurs, Star Wars, and the actual location of heaven than the political climate.

Did Ye Hear Mammy Died? is a book about a family of argumentative, loud, musical, sarcastic, grief-stricken siblings, shepherded into adulthood by a man whose foibles and reticence were matched only by his love for his children and his determination that they would flourish. It is the moving, often amusing, and completely unsentimental story of a boy growing up in a family bonded by love, loss, and fairly relentless mockery.

Reviews for “Did Ye Hear Mammy Died?” by Séamas O’Reilly

“Beautiful and funny and beautiful because it's funny. It's also sad and life-affirming and all about loss and border life and quietly heroic fatherhood and chaotically excessive siblinghood and priests and dogs. I loved it.” -  Patrick Freyne, author of "Okay, Let's Do Your Stupid Idea"

“I've been struggling to commit to a book for weeks but I've just read the first few pages of Did Ye Hear Mammy Died and I'M BACK BABY.” - Emer McLysaght

“Tender, sad and side-splittingly funny, this is the unforgettable story of how a boy with ten siblings and no mother grew into a man. It's a love letter to Northern Ireland and all the children, dogs, priests and struggling parents that live there. I adored it.” - Annie MacManus

“I enjoyed this immensely. I laughed a lot (often out loud). A heartfelt tribute to an alarmingly large family held together by a quietly heroic father.” - Arthur Mathews, co-creator of "Father Ted" and "Toast of London"

“I cannot stress enough how much I love this funny, adorable memoir. Not only hilarious, tender, absurd, delightful, and charming, but written with such skill as to render it unforgettable. I now can't wait to see the TV series and/or to become Séamas's best friend.” - Nina Stibbe, bestselling author of "Reasons to be Cheerful"

“Did Ye Hear Mammy Died is so funny and wonderfully written, I love it. “ - Maeve Higgins

“I laughed until I choked, I cried BUCKETS, I have NEVER been so charmed, I fell in GIANT LOVE with Daddy O'Reilly. Seriously, this is a rare and beautiful book.” - Marian Keyes

“An almost improbable true story of an Irish man bringing up eleven (yes, eleven) children on his own, after his wife dies. Séamas is the ninth of these "half-orphans" and he writes about his childhood and grief with such pathos and wit - even the chapter on his father's love of dogs is exquisite. A gorgeous memoir.” - Pandora Sykes

“Did Ye Hear Mammy Died is a delight. Both moving and funny in huge measure.” - Dara Ó Briain

“Melancholy and sweet and funny and sad all at once.” - Jay Rayner

About the author Séamas O’Reilly

Séamas O’Reilly is a columnist for the Observer and writes about media and politics for the Irish Times, New Statesman, Guts, and VICE.

He shot to a kind-of prominence with a range of online endeavours including ‘Remembering Ireland’, a parody of Irish nostalgia sites, which featured entirely invented moments from Irish history.

In 2016, he posted a long Twitter thread about the effects Brexit would have on Northern Ireland, which led to his first political writing for the New Statesman. Later on that year, his exasperated reviews of the novels of erstwhile footballer and manager Steve Bruce led to his participation in events with Guardian Football Weekly and various others.

His most recent viral sensation was a thread about the time he inadvertently found himself on ketamine while in a room serving drinks to his boss’s boss’s boss and the President of Ireland, Mary McAleese.