A 3000-year-old skeleton of a baby was found at Tlachtga on the Hill of Ward, which is considered to be the birthplace of Halloween in County Meath, Ireland. 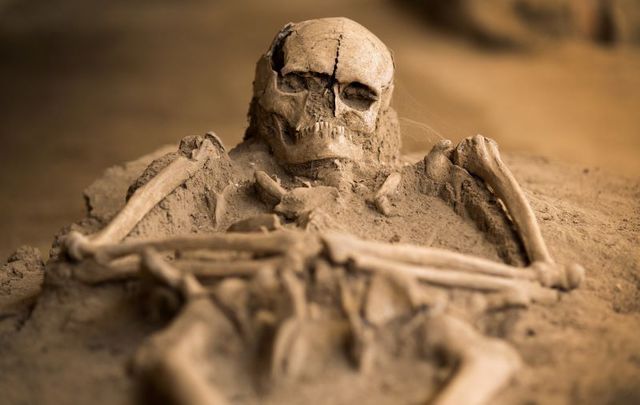 A 3,000-year-old skeleton was found at what is considered to be the birthplace of Halloween in Ireland. Getty images

A skeleton was discovered at the Hill of Ward in County Meath, which is considered to be the birthplace of Halloween.

The 3,000-year-old remains of a baby were found during an archaeological excavation in 2014, at a site in Co. Meath that is believed to be the birthplace of Halloween.

A fully intact skeleton of a baby between seven and 10 months old was discovered at the base of a 1.5-meter ditch at Tlachtga, on the Hill of Ward, Athboy in Co. Meath.

Archaeologists do not believe the child was the victim of any type of human sacrifice ritual at the site.

“We may never know what caused the death of the child. The skeleton probably dates back 3,000 years and was found in the bedrock at the base of a 1.5m ditch,” Dr. Stephen Davis, lead archaeologist on the site, told the Irish Examiner.

He described the remains, which were taken to the School of Archaeology at University College Dublin for further study, as “an exciting find.”

Tlachtga, where the three-week excavation was conducted, has long been believed to have been the first site to celebrate the feast of Samhain, or as it is more commonly known today, Halloween.

According to Dr. Davis, surveys using airborne laser and geophysical techniques have shown that the area was a “key ritual site.”

“The surveys clearly reveal that the site has several different phases of monumental enclosures and we believe them to be associated with festivals and rituals dating back as far as 1000 BC,” he said.

“It’s a very important site which was likely to have been a ritual assembly place. It’s one of only three sites of its status in Ireland; the others being Tara and Rathcroghan in Co. Roscommon.”

He added: “Tlachtga is also one of the sites known as the four corners of the old province of Meath, the others being Uisneach, Tara, and Teltown.”

Joe Conlan, a local historian and tour guide, was present at the site and said he was part of a druid circle that said prayers in the area before the remains were moved.

“It was reputed to be the site used to summon the priests, the augurs and druids of Ireland to assemble on Samhain eve to consume the sacrifices that were offered to their pagan gods,” said Conlan.

“It was decreed that all fires within the kingdom on that night were to be kindled from the Fire of Tlachtga, under the penalty of fine.”

Dr. Davis hoped the discovery would “strengthen the case for more funding” for further excavations, the Meath Chronicle reports.

Have you ever been to the Hill of Ward?