On this day: In 1725 Dublin children received the first smallpox vaccination

It's estimated that smallpox killed up to 500 million, in the 1700s the long fight to eradicate the disease began. 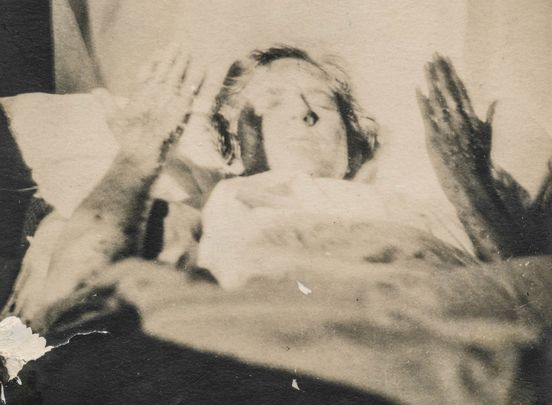 A photograph of a smallpox victim: with the caption "Lydia Jane had smallpox". SimpleInsomnia / Flickr

Thankfully by 1980, the killer disease of smallpox was eradicated, by a WHO vaccine campaign, but it was on this day 295 years ago the first five children in Ireland were vaccinated.

Smallpox was an acute and infectious disease caused by a virus. It was characterized by high fever and large sores on the body that left scars. The disease is estimated to have killed up to one-third of its victims. Those who were not killed were left with pock-marked skin or even blind.

The name "smallpox" was coined in the 15th century to distinguish it from the "great pox", better known as syphilis. However, smallpox's history on earth is believed to date back thousands of years.

In 1980 the World Health Organization officially declared smallpox eradicated. After ten years and $300 million, used on a global vaccination program, the disease was gone. The last recorded death from this disease was in Somalia in 1977.

In Ireland, the spread of smallpox from the 1600s onward inspired dread. Ireland's poverty and ignorance of infectious disease, at the time, had seen typhoid and dysentery ravage communities.

Between 1661 and 1746 smallpox is believed to have been the cause of 20% of all deaths in Dublin city and a third of all child's deaths in the area. It should be pointed out that this highly infectious disease did not discriminate. The rich, as well as the poor, were badly affected.

By the 18th century, hope emerged and an inoculation technique was found. Since the 10th century, the Chinese had been inoculating people, by using a small dose of the disease. The technique did not arrive in Europe for almost 800 years.

This technique was first tried on prisoners in Cork Jail in 1721, presumably against their will. Four years later five children in Dublin received the inoculation on August 26, 1725.

Over the years this technique showed its effectiveness. The rich began to infest and inoculated their families. Throughout the 18th century, as the disease had periodic epidemics, the richer families were less affected.

By the middle of the 18th century, the inoculation was in widespread use. The South Infirmary, in Cork, even initiated a program to inoculate the poor.

Sadly, of course, the unscrupulous saw an opportunity to make money as people queued up to receive the treatment. In Donegal, in 1781, all but one child, of a group of 52, died when an unqualified practitioner supposedly inoculated the group.

While inroads were being made against smallpox, with the emergence of the Great Famine in Ireland (1845 – 1849), the disease returned with a vengeance.

An illustration of a funeral during the Irish Famine.

This devasted even those who had found a way to make ends meet. Smallpox meant that even if you could survive the disease you would be unable to work for some time and many were pauperized by the lack of income and died eventually.

As Ireland emerged from the poverty and devastation of the Great Hunger, it was only from the 1880s that smallpox became more earnestly eradicated in Ireland.

The last outbreak of smallpox in Ireland was in 1903. In Dublin, there were found to be 256 cases. Sadly elsewhere around the world even up to the 1960s smallpox was rampant killing up to two million lives per year and leaving millions more disfigured and blind.

Thankfully by the 1980s, the WHO's world vaccine program had done its work and now the world is free of this disease which plagued the earth for thousands of years.