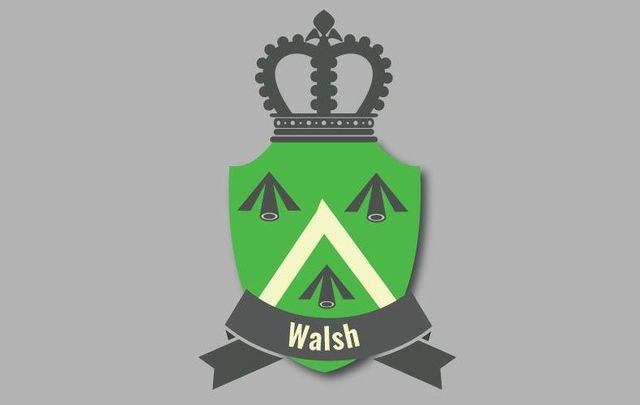 Here are some interesting facts about the Irish last name Walsh, including its history, family crest, coat of arms, and famous clan members.

Everything you need to know about the Irish surname Walsh

Coat of arms motto: Transfixed, but not dead.

Interesting Facts about the surname Walsh:

- It's the fourth most common surname in Ireland

- The French government distinguished an Irish immigrant Walsh family in the 1700s for their efforts in the French army.

- The name was used in particular to denote the Welshmen who arrived in Ireland in the wake of Strongbow’s Anglo-Norman invasion of 1170.

Walsh is a common Irish surname, meaning "Briton" or "foreigner", literally "Welshman" or "Wales". The name Walsh was taken to Ireland by soldiers from Britain, namely Cambro-Norman/Welsh, Cornish and Cumbrian soldiers during and after the Norman invasion of Ireland.

It is most common in County Mayo and County Kilkenny. It is the fourth most common surname in Ireland and the 265th most common in the United States. There are variants including "Walshe", “Welch”, "Welsh", "Brannagh", and the Irish "Breathnach".