How to pinpoint where your ancestors lived in Ireland

Kate and Mike Lancor of Old Friends Genealogy, based in New Hampshire, share some tips for researching where your Irish ancestors lived. 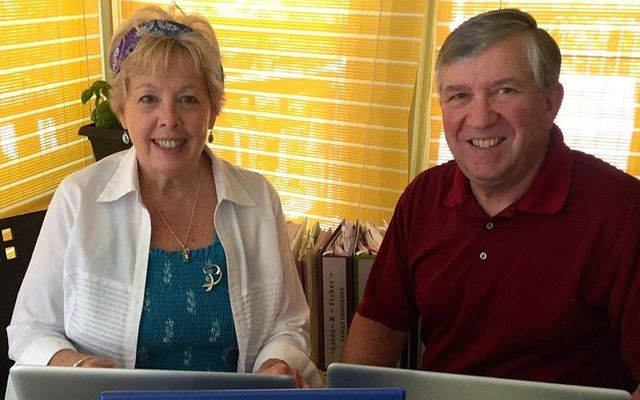 The extensive research and rewarding nuggets of history we discovered in the hunt to find our ancestral home in Ireland.

We have had the fantastic experience of visiting the home townlands of many of our Irish American immigrants. We have “chased” Kate’s ancestors back to Enniskerry in Co. Wicklow, Ballydurn Townland in Co. Waterford, and Templemore in Co. Tipperary.

As for Mike, we have “chased” his ancestors back to Ballyheigue in Co. Kerry, Litter More Townland in Co. Wexford, and Dunganstown in Co. Wexford.

Finding where our ancestors lived in Ireland was the endpoint, following extensive research.

We both found a number of Irish ancestors with surnames we never knew about. Kate’s family history stories said her Regan and Fitzpatrick clans were both from Carrick-on-Suir.

As it turns out, the Regans were indeed from Co. Waterford, but not so for the Fitzpatricks. As you search for your Irish ancestors, make sure you soak in all of the Irish history along the way!

As we share photos of our visits to these townlands, we will place the spotlight on several types of Irish records that can help you locate where your ancestors lived on the Emerald Isle.

Finding the home townlands of your ancestors is like solving a puzzle that will involve fitting together numerous pieces of information. We will highlight the Tithe Applotment Books, Griffith’s Valuation, church records, civil registration records, and local resources in Ireland.

You must first determine as much as you possibly can about your immigrant Irish ancestors before you begin to “chase” their roots in Ireland. What were their names, approximate years of birth and emigration, their parents’ names, did other relatives emigrate with them, etc.? Such information is absolutely critical if you are going to be successful in pinpointing where your Irish ancestors lived. 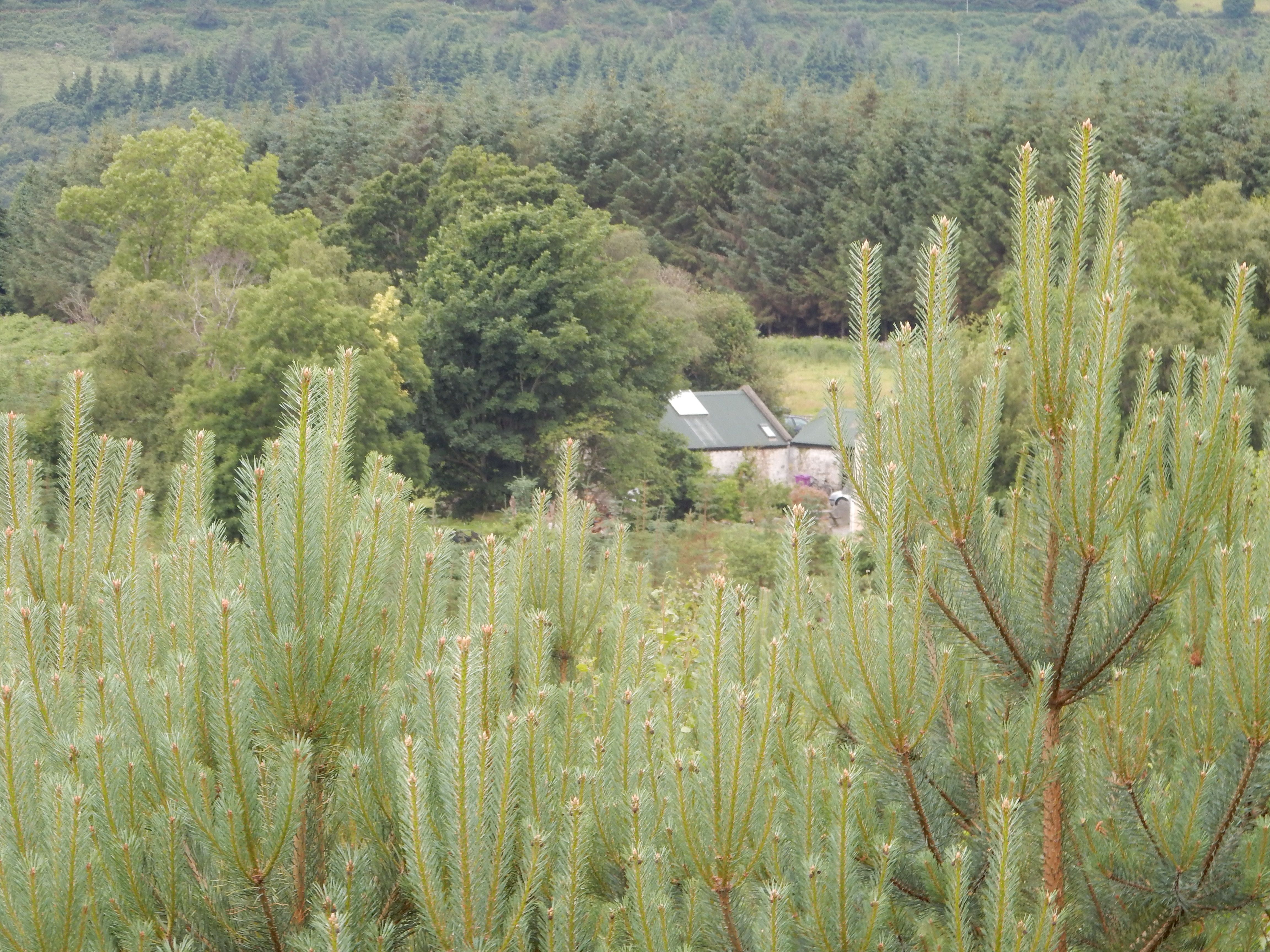 One of the McGuirk homesteads is still in use nearly 200 years later in this most scenic valley near Enniskerry in Co. Wicklow.

Patrick Byrne and Mary McGuirk, Kate’s 3rd great grandparents, were married in Roman Catholic (RC) Parish Enniskerry, Co. Wicklow in 1825. The address given for Mary was Tonegara. Four male McGuirks lived in Tonegara Townland when the Tithe Applotment Books were recorded in 1825. One of them was undoubtedly Mary McGuirk’s father.   Tithe Applotment Books were recorded between 1823 and 1838 as a survey of land to determine the payment of tithes as a religious tax. 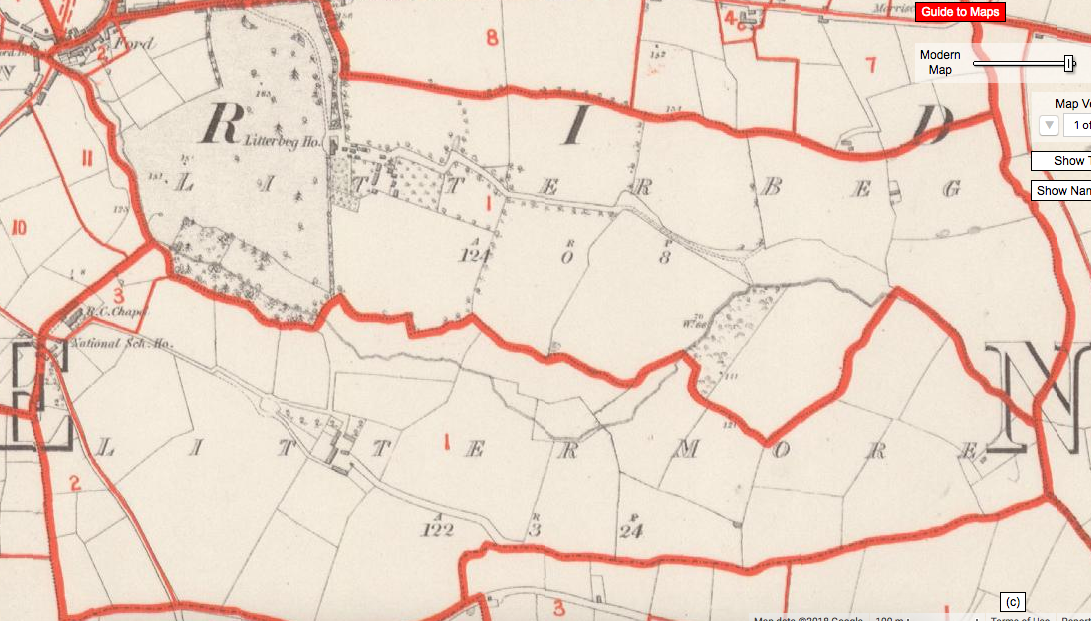 This historic map of Litter Beg and Litter More Townlands was taken from Griffith's Valuation records dating back to 1853.

Mary Whelan, Mike’s 2nd great-grandmother, arrived in New York City in 1856 with her children Mary, Matthew, and Brid. They made their way to Antwerp, NY where Matthew ended up serving in the Union Army during the Civil War. Matthew’s pension records state that he was from Litter More Townland, Co. Wexford. The village of Kilmuckridge includes Litter More and Litter Beg Townlands. 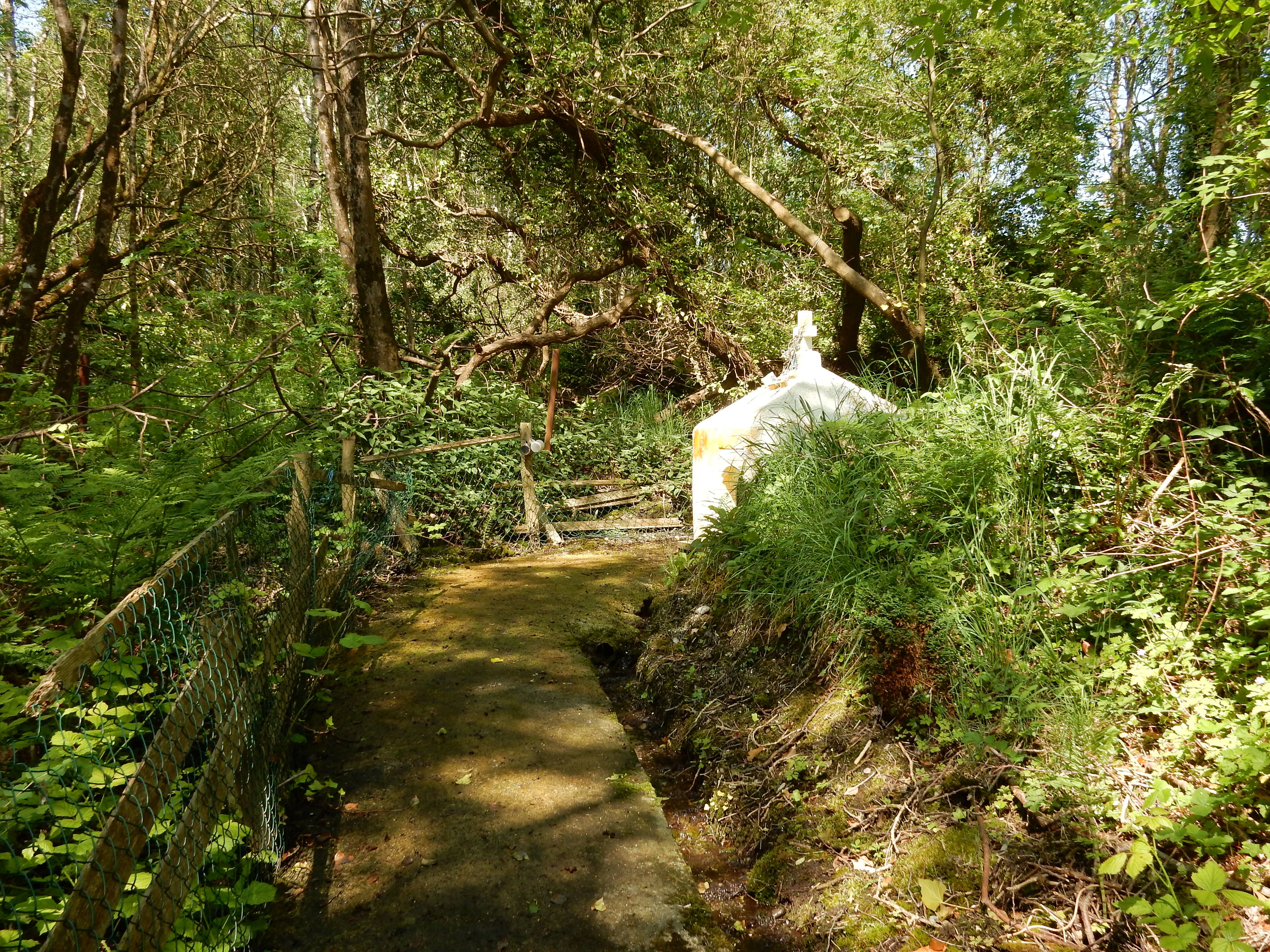 While "chasing" Mike's Whelan ancestors, we happened upon St. Machain's Holy Well next to Killincooley Graveyard near the village of Kilmuckridge in Co. Wexford.

James Regan and Catherine “Kate” Walsh, Kate’s 2nd great grandparents, as well as Kate’s Harney ancestors, lived in Ballydurn Townland, Co. Waterford before emigrating to Albany, NY in the 1860s. James Regan appeared as a farmer in the 1852 Griffith’s Valuation records. Kate’s great grandfather Edmund Regan was baptized on 7 Jan 1841 in RC Parish Kill. RC baptism and marriage records have been transcribed by the websites Roots Ireland and Find My Past. 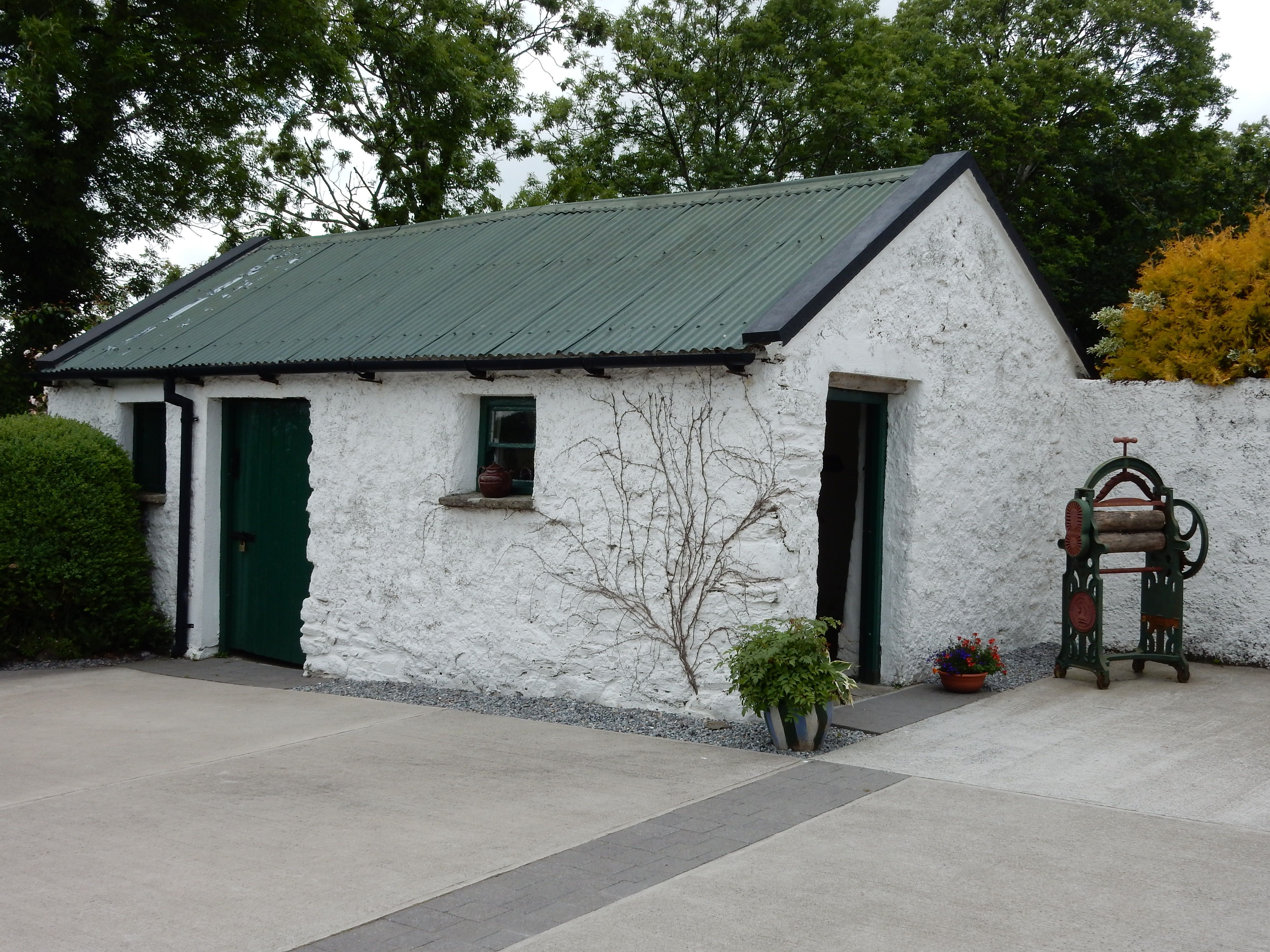 The Kennedy Homestead house pictured here in Dunganstown, Co. Wexford is the actual house in which James and Mary Kennedy raised their family in the early to mid 1800s.

William Kennedy, Mike’s 2nd great-grandfather, was born in Dunganstown Townland, Co. Wexford in 1826. William immigrated to Boston in 1847 and made his way to Cape Vincent, NY by 1850. He was a blacksmith and a miner before turning to farming.

Record found on Irish Genealogy website for James Kennedy who died in Dunganstown, Co. Wexford on 24 Feb 1881. His wife Catherine Kennedy was present at his death.

William’s brother Patrick Kennedy was the great grandfather of U.S. President John Fitzgerald Kennedy. William and Patrick’s brother James Kennedy did not immigrate to the States and died in Dunganstown, Co. Wexford in 1881. James’ death record was found on the Irish Genealogy website which houses Civil Registration Records for births and deaths beginning in 1864. 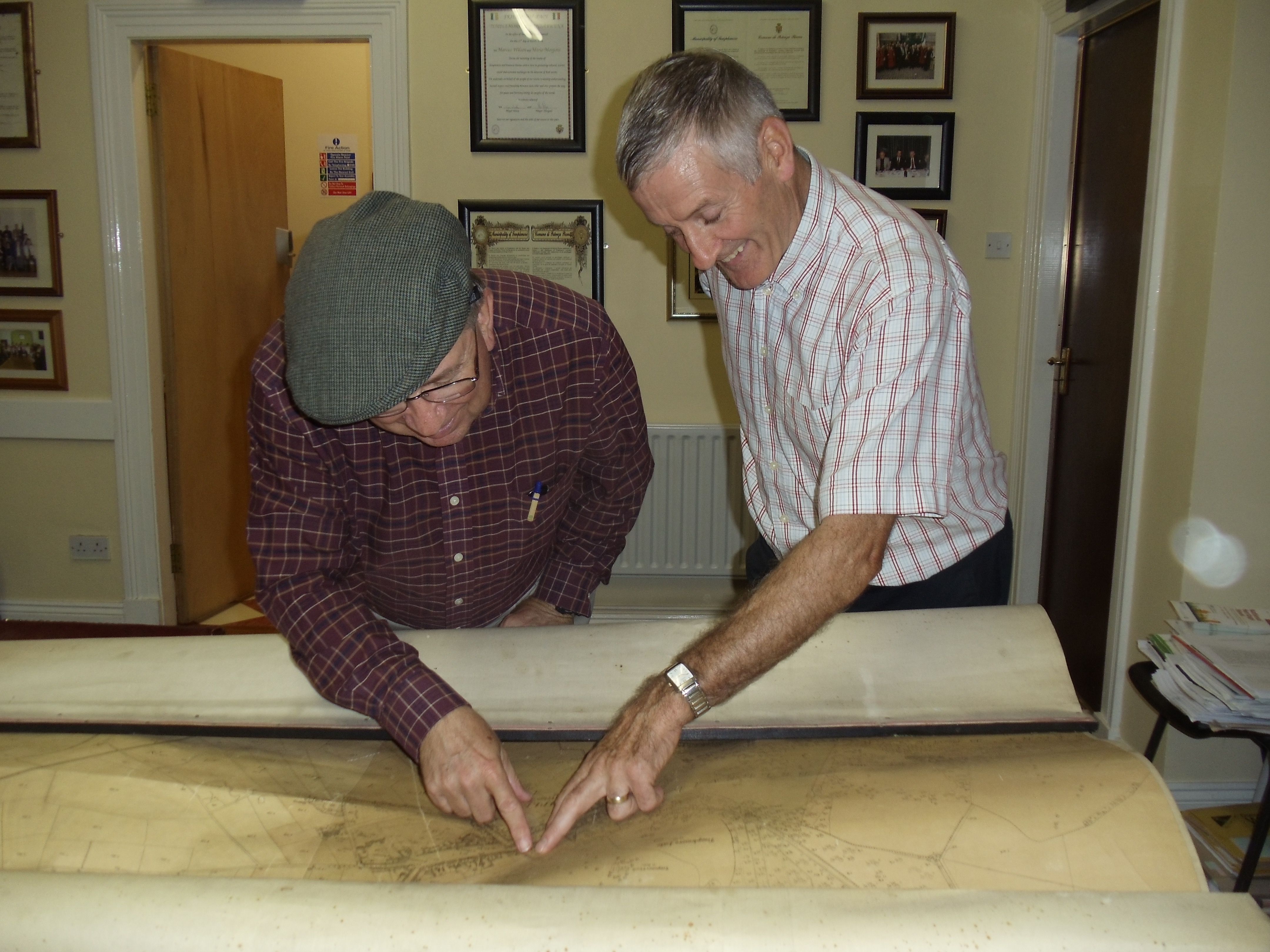 Mike (left) and staff member in Templemore City Hall share a laugh after finding Pig Foot Lane on a land map from the early 1800s.

Mary Waters, Kate’s great grandmother, was baptized in RC Parish Templemore in Co. Tipperary in 1831. As if to beckon Kate to find her nearly 200 years later, Mary’s baptism record stated that she lived on Pig Foot Lane.

Thanks to the personal assistance of the fantastic staff in Templemore City Hall, we were able to walk down Pig Foot Lane where the ruins of several one-room stone row houses from the early 1800s still line the now abandoned lane. 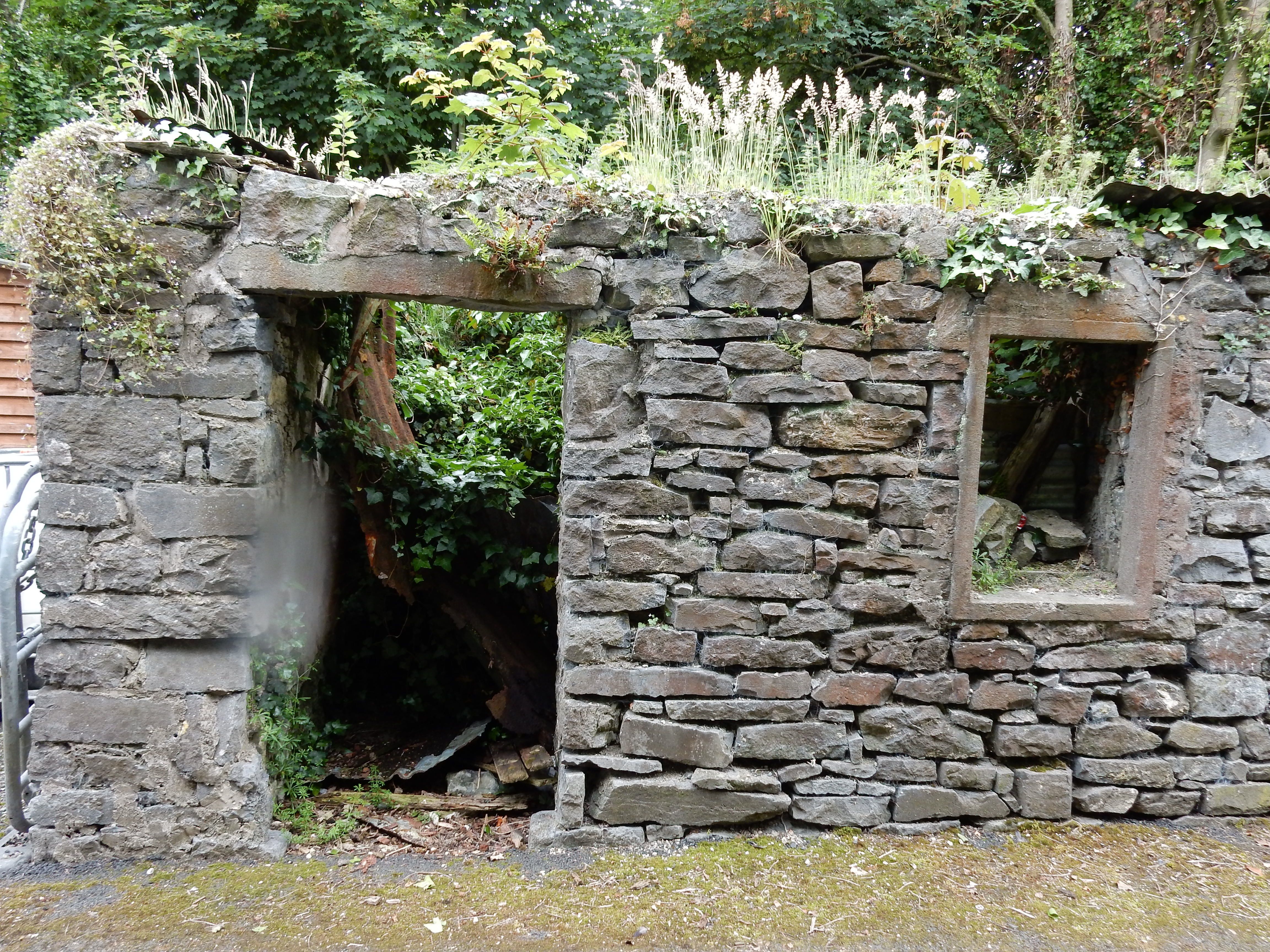 Ruins of a one room stone house on Pig Foot Lane in Templemore where Kate's great grandmother Mary Waters' family lived when she was baptized in 1831.

Richard Laide and Johanna Sullivan, Mike’s 3rd great-grandparents, lived in Dromatoor Townland near the village of Ballyheigue on the Atlantic Ocean in Co. Kerry. Even though Richard, Johanna and several of their children immigrated to Franklin Co., NY prior to 1850, the 1901 Ireland Census shows a John Laide and family living in Dromatoor. Google "Ireland 1901/1911 Censuses" to explore these extremely valuable records.

1901 Census showing John and Johanna Laide and their children living in Dromatoor Townland more than 50 years after Mike's great grandparents emigrated to the U.S.

If you have ancestors who emigrated from Ireland to the U.S. or elsewhere, then we have hopefully provided you with several record sources you can tap into in an effort to pinpoint where they lived before emigrating. Being able to visit the home townlands of your Irish ancestors is a journey back in time that will leave you overcome with emotions and filled with admiration for your forefathers and foremothers.

If you “hit a brick wall” in your search, then Old Friends Genealogy specializes in “chasing” Irish American ancestors back in time. We work closely with our clients by exchanging information, asking questions, and confirming records found in an effort to identify where each client’s immigrant Irish ancestors lived on the most beautiful Emerald Isle.