Maine man Kevin Battle traced his mother using a DNA test but was lied to by Irish Catholic Nuns about his past. 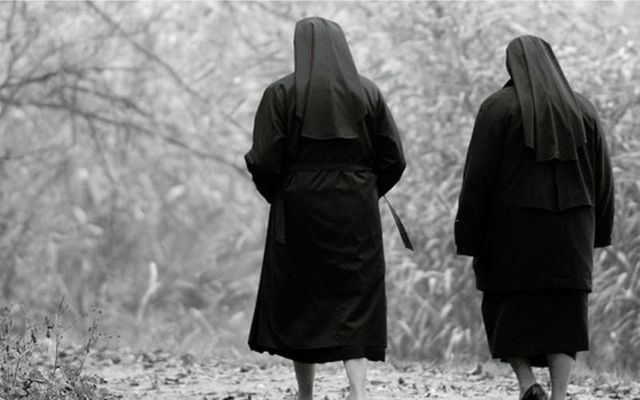 How Maine man Kevin Battle was able to trace his origins to a notorious Irish Mother and Baby Home using a DNA test.

Former Maine police officer Kevin Battle always knew he was adopted. What he didn't know, was that he had been forcibly taken from his mother in Ireland when she attempted to escape from a Mother and Baby Home.

After years of searching for the truth of his Irish origins, 57-year-old Battle met and reconnected with the family that Catholic nuns denied him for decades, but it was too late to meet with the mother who ran away from a convent in Co. Tipperary in an attempt to keep him with her.

Kevin Battle was born as William Sheehy in Sean Ross Abbey, Co. Tipperary, to a 24-year-old unmarried mother named Catherine Sheehy, who had been sent to the Mother and Baby Home to give birth and to serve a punishment given to her by the Catholic Church for becoming pregnant outside of marriage.

In the Mother and Baby Homes, unwed women were expected to give birth and spend a year looking after their child before being flung out. Their children were often given up for adoption to a Catholic family in return for a donation to the Church.

The institutions have now widely been exposed across the international press with thanks to the work of amateur historian Catherine Corless in Tuam, Co. Galway as well as the writings of UK journalist Martin Sixsmith on the story of Philomena Lee.

When her time in the home came to an end, however, Sheehy was not willing to give up her child and so she escaped the convent and managed to spend several weeks back at her home in Co. Limerick before the Irish Catholic Church came to her door once more and took her child from her.

Within weeks, young William Sheehy was adopted to an Irish family in Long Island, New York, for a hefty $1,000 donation. He was renamed Kevin Battle and his mother was never to see him again or hear anything about how he fared in the US.

It is thought that the Sean Ross Abbey adopted 438 children to America in this manner over the course of several decades in the mid-20th century.

Knowing he was adopted, Battle had always searched for his birth mother, traveling to Ireland with his adopted mother in 1978 to visit the convent where he was born and meet with the nuns.

The door was slammed in his face, however, and he was told he was not welcome.

“I thought I was an orphan, that she hadn’t wanted me and I’d never know why, but they lied,” Battle told the Portland Press Herald.

“She did want me. The church stole me from her, like they did to a lot of unwed mothers, and sold me. And years later, when I came asking, they lied and slammed the door in my face.”

It was in high school that Battle first began digging into his past when he discovered he was not a citizen when applying for the local volunteer fire department. Tracking down his New York birth cert, he eventually found the papers that said he’d been born in Tipperary, papers that listed his mother wrongly as Kathleen Sheedy.

For years, Battle would search for Sheedy, even using her name in computer search exercises while he was a cop. Her name had been changed, however, and his endless search was to no end when it was really Catherine Sheehy he was looking for.

Yet he did know his place of birth and in 1978 decided this was the best place for him to start. At this point in time, his birth mother was still alive.

“I went up, knocked on the door, told the woman who answered who I was, that I’d come from America but that I’d been born there and could she tell me about my mother,” he recalled of his visit to Sean Ross Abbey.

“She told me, ‘You are not welcome here, go away,’ and slammed the door. I couldn’t believe it.”

Years later, as the stories of the mistreatment in the Mother and Baby Homes and the forced adoptions came to the forefront, the Abbey did contact Battle and for a sum, he was able to buy information of his birth mother’s real name from the nuns.

After decades of searching, however, it was eventually an AncestryDNA test that would link him to close relations who were also on the lookout for a lost son.

While Catherine Sheehy had not told her further five children of their older brother while she was alive, she had told her husband - their father - and the pair had searched for her firstborn, being told by the nuns that he had died in an accident in New York.

Sheehy did not believe them, holding out hope until her death that her son would find them and even engraving a sixth yellow flower on her gravestone to represent all of her children.

On her death, her husband Patrick Finnegan told their five children the story and asked if they wanted to pursue it. While they thought that Battle would have found them by then if he was searching, the family made the decision not to press the matter further.

When Battle took the DNA in 2017, however, he was linked to a first cousin of his own in March.  “We’ve been looking for you,” the cousin told him, the opening line to an email that Battle had always dreamed of reading.

That year, Battle traveled to Wales, where his mother had relocated, and met with his half-siblings, instantly recognizing similarities between them, watching home videos of his mother at weddings, and even receiving a photograph of him with his mother as a baby. “Maybe this is the closure I need,” Battle said.

“I get into things, I join things, but I never truly feel like I am part of it. I always feel like I’m on the fringe, left out. Even being a cop, a fireman. Yeah, I’m there, but I’m not. Maybe that’s part of my not having my own family roots. Maybe this will change a little of that.”

“After so many years of bad information, dead ends, now it’s happening,” he added.

“I may finally get answers. It was not a happy beginning, that’s for sure, but it’s my story, and I want to know it.”