What should be done with refugees in Ireland?

With no end in sight to those seeking to enter Ireland, the Irish government needs to address the growing concerns of the public. 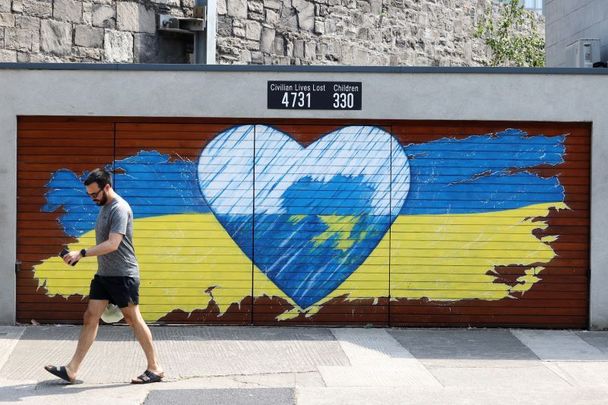 July 18, 2022: A mural in Dublin showing the number of civilian losses during the war in Ukraine so far. RollingNews.ie

To a public used to hearing stories of long queues trying to get into Dublin Airport, the news last Wednesday came as a surprise – difficulties in getting out of the airport. But when it was explained that the delays involved the sorting out of the temporary accommodation needs of incoming refugees, the inevitable chorus of “I told you so” began.

Over 300 refugees had to sleep in the old terminal building at the airport, many on the floor, when space to put them up elsewhere ran out. While the government blamed an unprecedented number of arrivals, the view of most is that it was bad contingency planning by authorities and a failure to rectify a system that is increasingly under enormous stress.

Over 42,000 people have arrived in Ireland from Ukraine since the Russian invasion in February. Initially, there were plans to house 20,000 refugees from the war under the government’s policy, but that number has since doubled and official sources now talk in terms of looking after 100,000 people by 2023. If that figure is reached – and at a rate of roughly 1,200 new arrivals per week it will be – then the estimated cost will be around €2.5 billion next year.

As a country, we can rightly be proud of our generosity. Once Ukrainians arrive in this country, they are given temporary protection status which allows them to live and work here as well as access income support, accommodation, health and education services as well as other state supports. Recent figures show that per capita, Ireland has taken in more Ukrainians than the majority of EU countries and has been almost six times more welcoming than the UK.

The situation is complicated by asylum seekers from other countries who continue to seek sanctuary in Ireland through the International Protection Service. We are less generous to this class of refugee.

They are officially asylum seekers until their application for refugee status is decided, and during that time the Irish state gives them accommodation, food, and medical care, usually in a Direct Provision center.

Numbers in this category have also grown significantly in recent months. Taoiseach Micheál Martin has said that the increase is in response to a new UK policy being introduced which threatens to deport new arrivals into the UK to Rwanda in central Africa.

This, according to Martin, has led to an unexpected surge in asylum seekers from Africa and the Middle East arriving in Ireland via Britain. He said the UK had motivated many applicants to exploit the Common Travel Area, which for decades has enabled barrier-free movement between the UK and the Republic of Ireland. While this view is disputed, there is no doubt that numbers in this category have sharply increased.

The question now, though, is how deep are our pockets, and are we prepared to deal with the collateral damage to certain sectors of our economy which will inevitably ensue if we continue along the same course? Additionally, can the government maintain public support, which is becoming frayed, with a recent opinion poll showing that 84 percent believed there was a limit to the numbers of asylum seekers Ireland can cope with.

While the constant undermining of government policy is expected from the extreme right, recent decisions have been questioned across the political spectrum.

In Kinnegad, a small rural town in Westmeath with a population of 3,000, concerns were raised by the Labour Party after 75 male asylum seekers were moved there. It is planned to eventually house 150 men in a 45-bedroom hotel.

The issue of the unsuitability of the location and lack of consultation and support services was characterised by Labour as “a badly organized move of a mass amount of people into unsuitable accommodation into an unsuitable venue without any consultation with the local community.”

“The hotel had been housing many foreign workers in recent months. These men never caused any trouble within the community. They, without any warning or consultation, were asked to leave the hotel to accommodate this large group.

“The new arrivals are complaining constantly about the lack of food, facilities, and intimidation by certain members within their own group.”

A recent policy initiative by the Minister for Housing Darragh O’Brien to make vacant social houses, homes owned by local councils, available to both Ukrainian refugees and those on the Irish waiting lists was criticised by the chair of the Irish Refugee Council who said that it was wrong to “pit the needs of the refugees versus the needs of those already in Ireland,” and branded it as a “dangerous game” which would play into the hands of extremists.

And extremists are only too willing to play that game. In the case of Kinnegad, a plethora of unfounded allegations were made against the asylum seekers, while the proposed housing policy set off the proverbial Twitter-storm.

The pressure on identifying housing has led to stresses on other aspects of the economy. There has been a reduction of rental apartments for professionals seeking to work in the country.

Tourist hotels, the lifeblood of many rural economies during summer, are now full with refugees. Language schools that bring in foreign students have run short of lodgings and have had to limit numbers and student accommodation has been converted for refugee use, a problem that will hit home come September when colleges reopen.

And then, of course, there is the conflict between competing groups for limited resources. Asylum seekers have complained of a two-tier system, with those fleeing conflict in Somalia, Syria, or Afghanistan on a much slower track towards integration. People on housing lists in Ireland, in some cases for over seven years, are questioning why there appears to be a fast-track process for those escaping Russian aggression.

What is clear in all of this is that the Ukrainian citizens are blameless. The vast majority are women and children.

It is not their choice to be in Ireland. Many have lost everything. For some, their stay here will be a long one, but for most, their intention is to return home once the war is over.

This, then, is the dilemma the Irish government is facing. With no end in sight to those seeking to enter the country, the government needs to address the growing concerns of the public.

*This column first appeared in the July 20 edition of the weekly Irish Voice newspaper, sister publication to IrishCentral. Michael O'Dowd is brothers with Niall O'Dowd, founder of the Irish Voice and IrishCentral.