The White Paper to End Direct Provision and to Establish a New International Protection Support Service has been generally welcomed in Ireland. 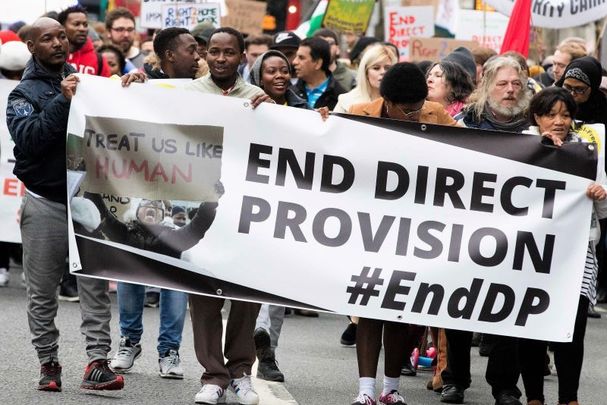 November 2017: Protesters on O'Connell Street in Dublin during the national demonstration calling for the end to the Direct Provision System for refugees in Ireland. RollingNews.ie

The Irish government has published its "White Paper to End Direct Provision and to Establish a New International Protection Support Service."

The entire White Paper, which can be viewed here, outlines how the Irish government will move end Direct Provision which, as TD Roderic O'Gorman writes, "has proven expensive, inefficient, and ill-equipped to respond to shifting trends in international migration."

In a statement issued on February 26, the Irish government said: “A new system for accommodation and supports for applicants for International Protection will be established.

"Under this new system, people who are applying for protection will be helped to integrate into Ireland from day one, with health, housing, education, and employment supports at the core of the system.

“The new system will be grounded in the principles of human rights, respect for diversity, and respect for privacy and family. It is being designed to offer greater support and greater autonomy to International Protection applicants. It will operate on a not-for-profit basis.

“Under the new system, when people arrive in Ireland seeking International Protection, at Phase One they will stay in one of a number of new Reception and Integration Centres for no more than four months. These centres will be newly built to a high specification and will be operated by not-for-profit organisations on behalf of the State.

“During this orientation period, people will receive integration supports to help them adjust to living in Ireland. This will include English language tuition and employment activation supports.

"After their first four months in Ireland, people whose protection claims are still being processed will move to accommodation in the community. This will be own-door or own-room accommodation, for which they will pay a means-tested rent.

“Applicants will be entitled to seek paid work after six months, and they will be encouraged and supported to do so. Integration supports will continue to be available to people who need them.

“The transition to the new system will be led by the Department of Children, Equality, Disability, Integration, and Youth. Progress will be monitored by a Programme Board whose membership will include non-government stakeholders. It is envisaged that the new system will be fully operational by December 2024.”

TD Roderic O’Gorman, the Minister for Children, Equality, Disability, Integration, and Youth, responded on Twitter to the publication of the White Paper and outlined how the new system will work. O’Gorman tweeted: “People in Ireland want to see Direct Provision ended.  I am absolutely committed to dismantling the failed system and replacing it with a new model that is rooted in human rights.

"Today, we are making a new commitment to all those seeking refuge in Ireland. We will end Direct Provision.

"Ireland should be recognised as a country which extends compassion, support, and understanding to those who are in need.

"Our new model of providing international protection will be welcoming, inclusive, and respect the needs of those seeking refuge."

He added: "This is an ambitious plan, but I am confident that it is achievable and through strong cooperation across Government Departments, and with NGOs and communities, we can establish an International Protection Support Service that delivers for the people who need it most."

I am absolutely committed to dismantling the failed system and replacing it with a new model that is rooted in human rights.#EndingDirectProvision pic.twitter.com/2VyX02hQGn

The publication of the White Paper on Friday was generally welcomed by advocacy groups, though concerns were also raised.

The Movement of Asylum Seekers in Ireland (MASI) said that the White Paper is "ambitious in some areas and lacks imagination in others" and that it will be further discussing the publication during its weekly meeting on Tuesday.

While Nasc also welcomed the publication, CEO Fiona Finn noted: "We are simply setting a future system up for failure if we do not address the processing times and the backlog of cases."

John Lannon, CEO of Dora s, an independent, non-profit, non-governmental organisation working to promote and protect human rights, said: "While the campaign to end Direct Provision is far from over, we are relieved to see the White Paper reflect a number of recommendations from the Day report, released in October.

"This is a significant milestone in the long campaign to end Direct Provision, and we broadly welcome the plans to replace it, outlined by the Department of Children, Equality, Disability, and Youth.”

The Immigrant Council of Ireland said in a statement: "Overall, while there is much work to be done to realise the vision set out in this document, we welcome it as a significant step towards moving beyond the system of direct provision.

"We commit as an organisation to working with Government, and our colleagues in civil society and beyond, to see this much needed change realised."

Nick Henderson, CEO of the Irish Refugee Council, said: "In short, we very much welcome the report but now the hard work begins. We look forward to working with Government and all stakeholders on implementation of the new system."

Colm O’Gorman, Executive Director of Amnesty International Ireland, said: "Until Direct Provision ends, thousands of people will remain within a system that the government has acknowledged is not fit for purpose. So, while 2024 is a realistic timeline for the creation of this ambitious alternative, the state must uphold their rights until that is achieved.”