Spancilhill - My day at the Fair in Co Clare

Journalist Ger Leddin takes a day off and visits, for his first time, the famous horse fair at the Cross of Spancilhill in Co Clare. 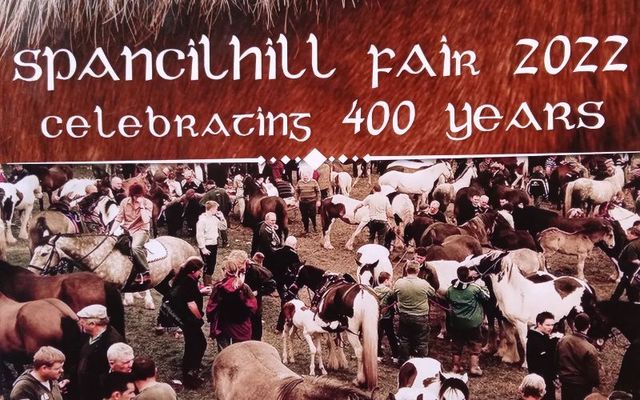 The cover of the booklet for the 2022 Spancilhill Fair in Co Clare. Ger Leddin

If the title "My Day at the Fair" is reminiscent of a school boy’s “My Day at the Seaside” essay, it’s not by accident. You see, I was as excited as a schoolboy on his first school trip to the seaside as I set off on my little adventure, my first time at the Spancilhill Fair.

It was, as the song says, “the 23rd of June.” The Spancilhill Horse Fair was being held that day after a two-year Covid enforced break. Not only was the famous fair making its post-Covid lock-down re-emergence, but it was also celebrating its four hundredth anniversary.

Four centuries, that's a long time. You are talking about 1622 when King James the First of England granted Valentine Blake lands near Muckinish County Clare where four roads meet at Spancilhill. Included in the Grant was a licence to hold an annual horse fair.

With only very few interruptions and hardly any changes, the fair at Spancilhill has continued in the same format ever since.

Celebrated in song — the tune Spancilhill was played by the Irish Guards regiment as they saluted the Queen of England on her platinum jubilee celebrations in early June this year — and famed in culture, the Spancilhill Horse Fair is known the world over and is included as part of Ireland’s national items on the UNESCO Convention for the Safeguarding of the Intangible Cultural Heritage.

Spancilhill is only eleven miles up the road from where I now live and, as I have just taken up my latest late-mid-life-crisis hobby of cycling, I said to myself “let’s go for it and take a road trip to the fair and see what all the fuss is about.”

To put my road trip in context, the last time I was on a bike, Ronald Regan was living in the White House. And even though my passport states that I’m 62, my right knee thinks I’m 82 and those folk who designed the up and down hilly terrain of Irish country roads must be convinced that I’m 22— so this cycling 22 miles there and back for me was a challenge.

Anyway, early morning and off I set, the sun was shining — in Ireland, especially so far this summer, it has either just stopped raining, is raining or is just about to rain. I was lucky, it had just stopped raining and the next dose of precipitation had yet to begin.

Enjoying the cycle and taking in the scenery, I cruised along the country lanes minding my own business and relishing the peace and quiet of rural Ireland. There is something special about cycling along the byroads of the Irish countryside. It’s being closer to nature. Travelling slower you have the opportunity to hear the birds sing, and to scent the newly cut grass — you can feel the breeze, it’s sharper, more intense, than the insulated bubble of a motorcar.

After passing the gates of Knappogue Castle, I arrived at the village of Quin where I broke the journey and gave my by now aching thighs a deserved rest while I sat on the low walls of the fifteenth-century Franciscan Friary.

I had taken an hour and a half to travel the eleven miles to Spancilhill (coffee in Quin included), so as you can imagine I’m not going to make the Guinness Book of Records for breaking any land-speed record.

If, by chance, you are an experienced and accomplished cyclist reading this, please don’t smirk at me. For me, those eleven miles were about enjoyment not speed, just a pleasant way to pass a morning.

The Spancilhill Horse Fair is usually held on the twenty-third day of June, but the traditional ballad "Spancil Hill" composed by the Californian-based Clare emigrant Michael Considine in the 1870s famously refers to the twenty-third as the day before the fair.

“It being on the twenty-third of June, the day before the fair, Sure Erin's sons and daughters, they all assembled there.”

A strict interpretation of the lyrics would imply that the fair was held on the 24th of June and this discrepancy of dates confused me as it confuses others. However, Paddy Hassett, the Public Relations Officer with the Fair Committee, enlightened me.

“The Fair is traditionally held on the 23rd of June, except when that day falls on a Sunday when, in deference to the Catholic Church, the fair is postponed to the following day,” he said.

Of course, if I had been diligent in my research and read the following stanza I would have copped this myself.

“It being on a Sabbath morning, I thought I heard a bell,
O'er hills and valleys sounded, in notes that seemed to tell,
That Father Dan was coming his duty to fulfil,
At the parish church of Clooney, just one mile from Spancilhill."

Speaking of the deference to the church, the fair holds the unique distinction of having once been cursed by the local parish priest.

The story goes that sometime back in the early 40s, during a sweltering summer, the locals became a little bit too mercenary and decided to sell water to the thirsty visitors. This was way before bottled water became the norm.

The parish priest took exception to the greed displayed by his flock and denouncing them from the pulpit ordained that in retribution for their greed the fair would never again see a completely rain-free day. Well, that’s the story anyway.

I’m not a great lover of horses. I confess they scare me. Big, powerful, and lumbering animals that can bite at one end and kick at the other. The Budweiser Clydesdales are my stuff of nightmares. You can imagine my discomfort when as soon as I arrived at the crossroads, I was suddenly surrounded by the brutes.

I did, however, take some reassurance in that all these likely to be unruly animals were firmly controlled by stout Irish farmer types who appeared to know what they were doing and gave every impression of having been charged with controlling horses since their childhood days.

It wasn’t just stout farmers, but boys and girls aged from around ten years upwards confidently leading horses around by halters, secure in the knowledge that their father’s fathers had been doing just this for generations. It wasn’t a bother to them and I envied them for their fearlessness.

As far as the organisers can be certain, the Fair has only been canceled four times. Once in 1921 due to the outbreak of the War of Independence, once in 2001 due to an outbreak of Foot and Mouth Disease, and more recently Covid caused the cancellation of the 2020 and 2021 Fairs.

A problem with obtaining insurance cover for the Fair threatened this year's event. Organisers and locals were unsure if the fair would go ahead until Clare County Council stepped in during April and by extending its policies to cover the Fair ensured its continuance for another year at least.

It’s a small fair, known for its traditional and cultural value more than for its visitor numbers or cash sales.

Paddy Hassett, the committee spokesperson, told me they expected to see a crowd of between 4,000 and 5,000 attend this year. Being only a one-day event, Spancilhill isn’t really highlighted on the tourist trail which is a pity as any visiting tourist would find it a great event to see a hidden yet delightful aspect of Irish culture.

I had arrived at about ten in the morning and already the Fair Green area was packed. Buyers and sellers and those like me just looking on were meandering about, greeting and well-wishing each other, the slapping of backs by the men and hugs to each other by the women.

The two-year Covid furlough made the reuniting all the sweeter. These were horsey-people, traders in equine goods, all down-to-earth sorts with no airs or graces. There to buy and there to sell and they all knew their business.

Horses, ponies and dogs, saddles, harnesses, and all things related were on sale. Sellers were out to make a profit and buyers looking out for a bargain, yet there was an air of honest dealing. Loud bartering and feigned disinterested walking away before coming back to slap a hand and make a deal.

No one in Spancilhill was out to ‘do’ the other. The dealing was hard-fought, intense but honest with both participants finally walking away happy. These people knew their horses and knew how to strike a deal.

So there you have it, my first visit to Spancilhill Fair. As I cycled my way home, two thoughts crossed my mind. I thought I must go again next year and as my bike and I battled those hills outside Quin I thought “I should have bought a horse."