In Ireland, the medium became the news story as broadcasters hit the headlines, in one case over a story that was not transmitted, and in the other a veteran sports presenter strayed into the political sphere. 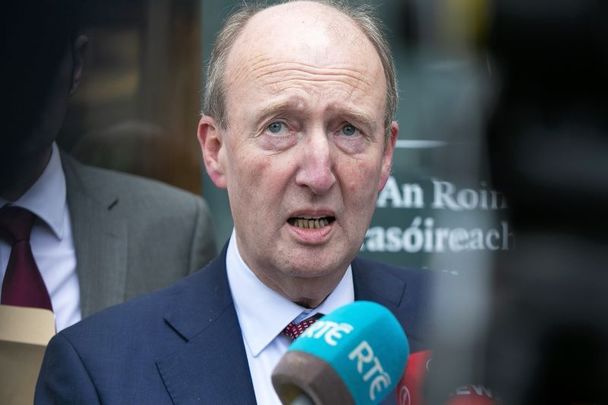 Shane Ross, Ireland's then Minister for Transport, Tourism, and Sport on January 30, 2020. RollingNews.ie

It is never a good sign when the leader of a country criticises a TV station that has mass appeal.

In fact, it’s usually a precursor to closure and censorship. Ask the citizens of Russia, Turkey, India, Pakistan, and countless other countries where broadcasters came into conflict with the government.

Yet this is exactly what Taoiseach Micheál Martin did in the Dáil last week when he openly questioned the decision by RTÉ, the Irish state broadcaster, not to transmit an interview it had conducted with a former government minister, Shane Ross, over a book that he had written about Sinn Féin leader Mary Lou McDonald.

The facts in the current controversy are straightforward enough. Ross wrote an unauthorised biography of McDonald. RTÉ requested an interview with him about the book but then refused to broadcast it.

Ross accused the national broadcaster of being frightened of offending Sinn Féin given that McDonald is currently suing RTÉ for defamation on another issue. Martin then jumped in with his comments. RTÉ denied the claims of Ross and Martin, saying that the decision not to broadcast was an editorial one.

While the taoiseach rowed back on some of his remarks, the main criticism remained that RTÉ backed down in the face of a legal threat. As we shall see, that may not have been their main motivation though.

While there is no danger of RTÉ being closed down, what is unusual is that the broadcaster has always been a “protected species,” seeing itself above reproach but willing to bow to government wishes when required. One such time was March of last year when RTÉ publicly apologized to the minister of finance for “the manner” in which a question had been asked on a current affairs program.

It was a toe-curling, humiliating moment for the station, but then they are after all propped up by a licence fee collected by the government from the public by way of a compulsory TV fee which last year amounted to €200 million.

From RTÉ's perspective, they are only too aware of their reliance on government generosity to prolong their media dominance. Ruffling feathers of the ruling classes, especially those who hold the public purse strings, is not in their DNA.

RTÉ has a unique place in Irish life. According to their own figures in any given week, 91 percent of people living in Ireland access its channels or services across television, radio, online, mobile, social media, and through live events.

Research shows that RTÉ News is the most trusted news by the population in the country, 74 percent according to the last Reuters survey. By contrast in the US, CBS and ABC have a credibility rating of 61.

No doubt this current dispute will blow over, but it does raise important questions about RTÉ, its impartiality, the relationship it has with political parties and whether it should continue to receive preferential funding.

Although the TV top brass spout on about public service broadcasting, the real game for them is empire building and protection of the status quo. Consequently, the antennae in Donnybrook in Dublin where they have their headquarters are used more for seeing what way the political winds are blowing rather than broadcasting programs, and they are blowing Sinn Féin’s way.

However, for many of RTÉ's critics, public faith in the organization is misplaced with the station using its behemoth status to impose its view of the country on an unsuspecting public and in doing so reneging on its public service obligations that entail requirements for impartiality and balance. In truth, RTÉ's roots are in a paternalistic attitude towards the audience it serves, a belief that they know best.

That was evident during Covid where alternative voices to government-appointed experts were not heard. So when the chief medical officer, early in the crisis, said that wearing masks was a bad thing, there was not one questioning voice on RTÉ. It felt like a marketing vehicle for the Department of Health.

Contrast that with the radio station Newstalk, which in terms of listenership is second to RTÉ 1. Their current affairs host Pat Kenny, a veteran broadcaster and an early advocate for the use of masks, continually questioned government decisions during the pandemic. It was how public broadcasting should work, where alternative viewpoints are heard and seen by the public.

Time and again when controversial subjects are being discussed on RTÉ, they do not include a range and depth of different and competing perspectives. Editorial opinion is too often given as facts. This has led to the station being heavily criticised for its promotion of a social agenda.

Last year, the station was pilloried for broadcasting a documentary on the 2018 referendum that led to the introduction of abortion. While claiming to be the definitive account of that divisive campaign, it told the story from one side only and made no attempt to show a balanced case as to why almost one-third of the population voted against the change.

It was an unchallenged viewpoint that undermined the reputation of the station. Nothing new there as pro-life advocates believe that they are continuously being kept off the airwaves, and all known evidence would support this view.

The spat with politicians comes at a delicate time for RTÉ. A report published by the Future of Media Commission, set up by the government to examine how public service aims can be delivered and sustainably funded, found that the current license fee model was unsustainable and needed to be reformed.

The government accepted this need for reform but in its typical kick the can down the road style of governing, it set up a new commission to look at the issue. No doubt it will report long after the next election.

If that is the case then RTÉ may feel the need to make sure that they don’t antagonise a certain female political leader who just might be the next taoiseach following that election and in charge of their budgets.

Machiavellian or cynical? No, it’s just the way those broadcasters think.

The other broadcaster in the news this past week was Sky Sports. Rob Wotton of Sky Sports News questioned Irish women’s international player Chloe Mustaki after Ireland’s victory over Scotland that sent the Irish team into next year’s World Cup.

In a condescending tone, he asked Mustaki if the Irish team needed to be educated following their “Up the Ra” chant in the dressing room. The stupid Irish is a trope – or characterisation – that has been used by some in Britain over the years. It has no place in today’s world. Sky sponsors the ladies team.

Next day headlines had the supposedly good news that this sponsorship with the Football Association of Ireland (FAI) was not in jeopardy and Sky would stick to the multi annual deal.

Well, it should be in jeopardy. There is no place for the latent bigotry that this line of questioning demonstrated. My advice to the FAI is to ditch Sky now.

*This column first appeared in the October 19 edition of the weekly Irish Voice newspaper, sister publication to IrishCentral. Michael O'Dowd is brothers with Niall O'Dowd, founder of the Irish Voice and IrishCentral.