The good news is that Ireland’s population is aging and people are living longer. The bad news is that this is costing all of us more as we have to pay for the extra pensions and healthcare. 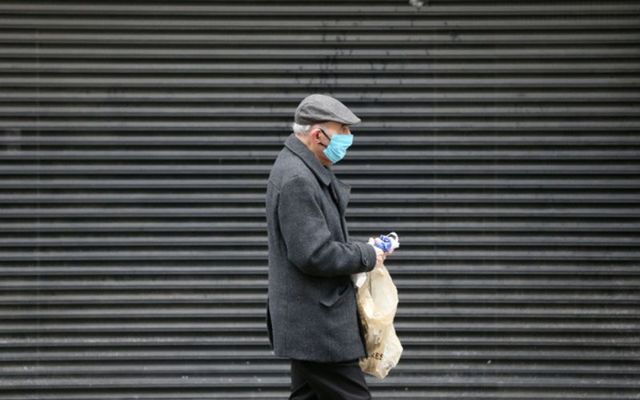 An elderly pensioner walks through Dublin in February 2021. Rolling News

When Yeats wrote the line “that is no country for old men,” it’s unlikely he was thinking about the longevity of our senior citizens or indeed the pensions they are paid.

Nevertheless, the good news is that Ireland’s population is aging and people are living longer. The bad news is that this is costing all of us more as we have to pay for the extra pensions and healthcare.

The ratio of working-age people paying tax to support state pension payments is reducing significantly. Government figures show that today we have 4.5 people working for every one pensioner, but by 2050 this ratio is predicted to drop to approximately two people working per pensioner.

The trend can be seen very clearly in Department of Social Welfare figures. In 2010, pensions made up approximately 28 percent of that department’s social welfare expenditure. This proportion has steadily increased, and this year the €9 billion spend on the pension system represents 39 percent.

It is, according to economists, a pension time bomb with the kitty that was being set aside to pay for future pensions, the Social Insurance Fund (SIF), having been laid bare by special Covid payments.

Aware of the strain that all this will place on public finances in the years ahead, the government commissioned a report which basically said that the state pension system was not sustainable and set out a roadmap for reform. Having considered the report, the government’s solution was to accept some recommendations and amend or postpone others such as automatic enrollment of workers in pension schemes.

It has led critics to claim that the government was tinkering with rather than fixing the problem. Government politicians are happy, though, as difficult decisions have been kicked well and truly down the road and past the next election.

What the current Fianna Fail-Fine Gael government coalition is proposing is that a flexible pension age will be introduced and we will have five different pension rates. The amount you get will depend on the age you retire.

So – and these figures are pre this week’s budget announcement – if you leave work at 66 you will get €253 a week which increases year on year, to those who retire at 70 who will receive €315 per week. Good news for some, but most definitely bad news for those working and paying tax as the Irish Fiscal Advisory Council (IFAC) believes that over time this will lead to a minimum of €2,000 per annum in extra taxation for the average employee.

The proposals have been generally welcomed by those working in human resources who believe it will lead to a more flexible workforce and will go some way to addressing the skills shortage. They do, though, acknowledge that it will lead to difficulties in getting new blood into a firm and will lead to resentment in terms of access to getting a promotion.

Trade unions are less enthusiastic and expressed concern at the pressure being applied to the less well-paid to continue working when they really would like to retire.

The IFAC has been most scathing in its response, accusing the government of failing to grasp the nettle of the pension’s shortfall. They also point out the announcement was not accompanied by any costings or of figures about how many people they expect will work longer.

This is a serious omission that casts doubt on the whole viability of the scheme. We have been asked to suspend our judgment until next year when an actuarial review of the SIF will be completed. Not many people are prepared to trust them though.

However, there are other issues surrounding retirement payments. One of the great injustices associated with pensions in the past that continues to have a legacy effect today is the marriage bar.

Tens of thousands of Irish women were forced to leave the workforce upon marriage. Introduced in Ireland in the 1920s and lifted in 1973 following our entry to the EU, the marriage bar required women to resign once married and disqualified married women from applying for vacancies.

Legally enforced in the civil service, it was also informally in place in the private sector. It’s believed over 57,000 women are still affected on the basis that they receive a reduced pension today because they cannot meet the required number of pension contributions, or because they were in lower grades when forced to leave work. In an era of apologies and recompense, there is a strong case for compensation for women affected by the marriage bar.

The other area of Irish society requiring pension reform is the agricultural sector. The Central Statistics Office shows that the age profile of farm holders has changed over the last 30 years, and there are now fewer farm holders under the age of 45 and considerably more aged 65 or over.

In 2020 almost one-third of all farm holders were aged 65 or over compared to just above one-fifth in 1991, while the percentage under 45 has dropped from 33 percent to just under 21 percent.

A study conducted by the Irish Farm Advisory System and Maynooth University quotes a figure of 62 percent of Irish farmers aged over 65 having no private pension. The EU has called on governments to introduce generational renewal policies seeing this as the best way to maintain the family farm model which is the cornerstone of Irish agriculture.

Key to such policies is a workable, fair contribution scheme for farmers and their spouses that would give them a liveable wage on retirement which in turn would incentivize the transfer of holdings to younger family members.

The reality, of course, is that retirement is not something most people think about unless they are coming close to it and the issue of pensions is considered significant but boring – until the date for leaving work looms.

But, if like Yeats and his beloved Innisfree, you plan to find some idyllic location to retire to so that you can “have some peace there” then the time to start planning is now, with or without state support.

*This column first appeared in the September 28 edition of the weekly Irish Voice newspaper, sister publication to IrishCentral. Michael O'Dowd is brothers with Niall O'Dowd, found of the Irish Voice and IrishCentral.