A video on social media shows the female Republic of Ireland football team singing "Ooh ah up the Ra!". 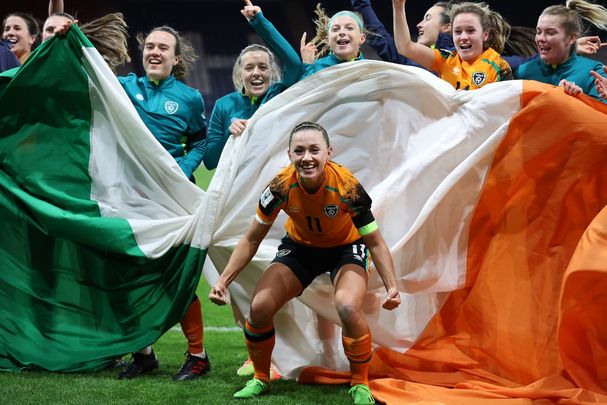 The manager of the Republic of Ireland's women's football team, Vera Pauw, and the Football Association of Ireland have apologized after footage emerged of the squad singing a pro-IRA song after their victorious World Cup qualifier game, in Glasgow, on Tuesday night.

A video of the Republic of Ireland women's football team singing in the Hampden Park dressing room circulated on social media after the victorious game.

The team apparently sang "Ooh ah, up the RA", a chant associated with the support of the Irish Republican Army (IRA).

On Wednesday, the Football Association of Ireland (FAI), and their manager Vera Pauw, issued a statement that read: "The Football Association of Ireland and the Republic of Ireland Ireland Women’s National Team Manager Vera Pauw apologise for any offence caused by a song sung by players in the Ireland dressing room after the FIFA Women's World Cup Qualifying Play-off win over Scotland at Hampden Park on Tuesday night.

"We apologise from the bottom of our hearts to anyone who has been offended by the content of the post-match celebrations after we had just qualified for the World Cup.

"We will review this with the players and remind them of their responsibilities in this regard. I have spoken with players this morning and we are sorry collectively for any hurt caused, there can be no excuse for that.”

Speaking to RTÉ, the team's manager Vera Pauw insisted: "The values that we carry is that we have respect for everybody.

"The first meeting with the players was about having respect, that's how we work."

She added: "We're sincerely and deeply sorry for what happened and it doesn't matter if the players meant anything or not, because they didn't mean anything, because it was a celebration.

"That doesn't mean they should not realize what they were doing.

"And also, not to put it on social media, if it's in a private room it should not happen either, because of having respect for everybody, respect for the history.

"Your freedom ends where you go into the freedom of somebody else.

Ulster Unionist Party leader, Doug Beattie was among those to object to the video saying that the Irish players had "let themselves down".

He said "They need to understand that some of their supporters may have lost loved ones due to the murderous actions of the IRA. An apology is the least they could do."

I do not know the veracity of this clip but I have to say if accurate it’s a kick in the teeth for some of those who congratulated them & those supporters who lost loved ones at the hands of the IRA.
Really poor.

On Tuesday night, the women's Republic of Ireland team made history when they qualified for their first-ever World Cup thanks to their 1-0 win over Scotland.

Irish player Aine O'Gorman said "We sang 100 songs last night and that was the one that went out. We would just like to apologize to anyone who was offended."

Another player,  Chloe Mustaki also apologized for the team's "lapse of judgment".