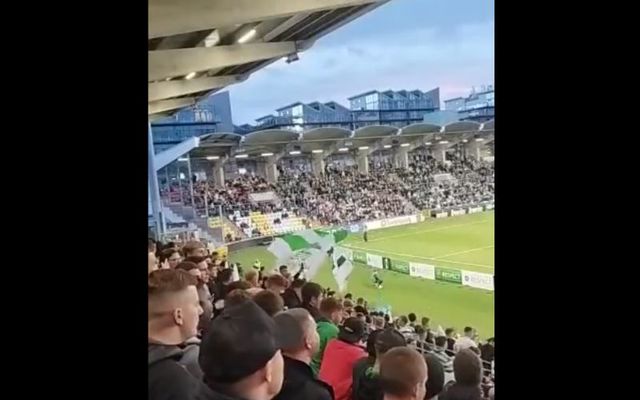 Irish soccer club Shamrock Rovers has condemned "callous chanting" from a section of their own support during a game in Dublin on Thursday night.

The Dublin club was taking on Swedish club Djurgardens in a Europa Conference League game at Tallaght Stadium just hours after the death of Queen Elizabeth II was announced, with video footage showing some supporters singing a crude song mocking her death.

In a clip that has been viewed 9.2 million times on Twitter, Rovers fans can be heard singing "Lizzie's in a box" to the tune of "Give It Up" by KC and the Sunshine Band.

"Shamrock Rovers F.C. has been made aware of chants by a group of individuals at last night's game," the club said in a statement.

"Such highly insensitive and callous chanting is not acceptable at our club and is against the values that Shamrock Rovers F.C. stands for.

"Our ground regulations issued on match tickets and on signage at entry strictly prohibit such activity. The following is also announced over the PA system before all of our games in Tallaght Stadium.

"Shamrock Rovers Football Club welcomes all supporters to its grounds and condemns any form of bigotry and discrimination in soccer.

"Shamrock Rovers Football Club does not condone hostile abuse of individual players, spectators, or officials based on ethnic or cultural background, nationality, or religious affiliation.

"Those found to be involved in any such behavior will face ejection from the ground and will be reported to the Gardaí."