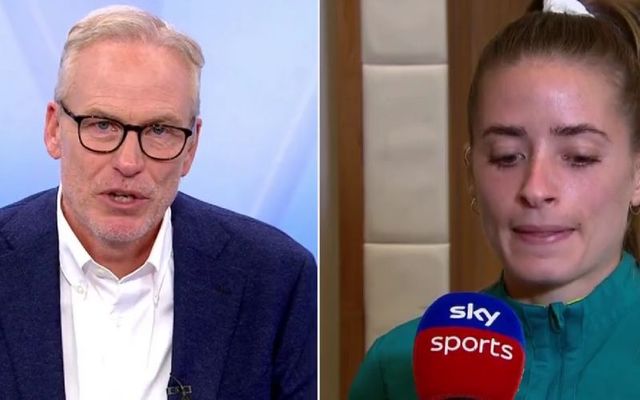 An English presenter has gone viral after suggesting that the Irish women's soccer team needed an "education" after players were filmed singing "ooh, ahh up the 'Ra" following their historic win over Scotland to reach the Women's World Cup next summer.

"Yeah absolutely," Mustaki replied. "[It was] obviously a massive lapse in judgment on our end. Lots going on when the final whistle went. We absolutely didn't intend to cause any hurt."

She added that the players were "incredibly embarrassed" by the incident.

Wotton then questioned whether the Irish players needed education on the history between Ireland and Britain.

"I guess it raises the question does it highlight the need for education on issues like this? Is that something you'd be for?" Wotton asked.

Mustaki, however, disagreed with the English presenter.

"I don't really think so. We need to learn in these moments to be better and do better. We've all been brought up knowing a lot about Irish history. We need to be better," she said.

The interview, which has been viewed 4.4 million times on Twitter, has drawn widespread criticism from Irish viewers, who took issue with Wotton's line of questioning.

"Think we can all agree that the singing was ill-judged, but the absolute irony overload here of a British person implying that an Irish person needs to be educated on Anglo-Irish history when their whole education system ignores it," said one Irish Twitter user.

"An English man asking an Irish woman if she needs to be educated on Irish history has to be one of the most ironic things of all time," said another.

A third Twitter user said they "found it weird" that the Irish team had to apologize to British people for singing about "freedom fighters that were required to end British occupation".