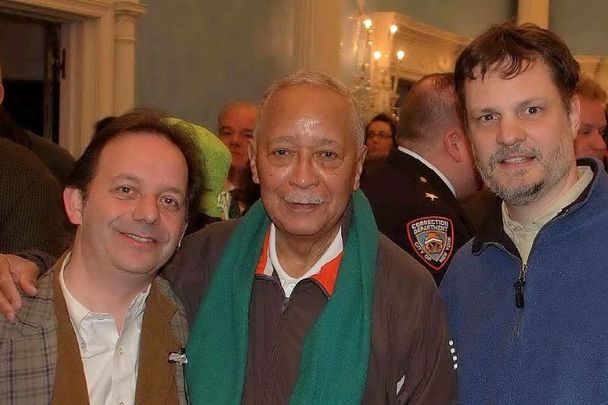 Prominent New York City leaders gathered in Harlem last weekend to honor the memory of the late New York City Mayor David Dinkins, who passed away on Monday, November 23 at the age of 93.

On Sunday, I joined Malachy McCourt and John McDonagh for a WBAI Radio Free Eireann special tribute in honor of former NYC Mayor David Dinkins.  It was on March 16, 1991, when he stepped back from the traditional front place of honor at the New York City St. Patrick's Day parade and walked alongside Irish LGBT immigrants in the Irish Lesbian and Gay Organization (ILGO), that he stepped into our lives, our hearts, and history.

We applied to march in October 1990 when Frankie Beirne and other parade organizers said sorry, but there’s a waiting list of 40 groups.

Truth be told the issue was our banner with our name -- Irish Lesbian and Gay Organization. Eventually, the city’s first African American mayor negotiated a compromise with leaders of the AOH Division 7 for our inclusion.

Dinkins later wrote of his decision, "I suppose I could have stayed away, either in boycott or out of an unwillingness to offend some of my constituents...but I refused to stand idly by; history tells us that one should not be silent in the face of persecution."

I left my home in Jamaica, Queens dressed in a kilt loaned for the day by my landlady Pat O’Loughlin and a triangle with a Tricolour badge. Instinctively I felt this “coming out” day would transform our lives.

I was with AIDS activist Robert Rygor (1953-1994) towards the center of the AOH- ILGO group. Robert reached out and together we raised our held hands in defiance and hope.

Mayor Dinkins was at the front of our contingent with ILGO’s Anne Maguire, Paul O'Dwyer, AOH Division 7 courageous leaders Pat Clark and Bernie Morris and Malachy McCourt, who for years would support our cause for inclusion.

As we made our way up Fifth Avenue we were met by waves of support, cheers, and then the loud, the very vocal anti-gay jeers. People held up anti-LGBT racist signs. "ONE TERM DINKINS." "You're a disgrace!" "Die faggots." “Go back to where you came from.” Not sure if they meant Ireland or the closet.

Beer cans were thrown. An arc of beer doused the mayor.

As we came by St. Patrick's Cathedral, Mayor Dinkins was gracious. Cardinal John O’Connor was not welcoming. Traditionally the cardinal would come down the steps to greet city officials and group leaders. Nonetheless, the mayor climbed the steps to greet him.

When we passed the reviewing stand near the parade end, AOH leaders turned their backs. This was the day in history when the African American mayor of New York showed us how to hold on to humanity and dignity in the midst of hate and prejudice.

The following day, March 17, we gathered to celebrate the historic moment by the Stonewall Bar in Greenwich Village. Dinkins came and danced a jig with us.

Robert Rygor introduced his parents Stanley and Kathleen to the mayor and all of us. We thanked the mayor for his courage, his leadership and dignity. Then we danced and Mayor Dinkins danced with us. Traditional Irish musician Stanley Rygor played the music.

I will always remember the day I danced with the mayor of New York. We hardly knew the struggle that was just beginning and how our lives would be transformed. At the time, I was a religion teacher in a Catholic girl’s high school in Queens. Shortly after Mayor Dinkins wrote a letter to Robert and other LGBT leaders regarding his experience at the parade which, he said, reminded him of Birmingham, Alabama.

He wrote, "We must not flinch from our responsibility ever to widen the circle of tolerance...I would rather be booed in a parade than bow down to the forces of exclusion, fear and intolerance.  By working together to fight discrimination against some of us, we will improve the quality of life for all of us.”

It was the experience of 1991 and the following years of protests, exclusion, and arrests that inspired me to begin St. Pat’s for All in Queens. We never gave up on each other and inspired by the spirit of Dinkins continued to reach out.

The day came 25 years later and on March 17, 2016, our Irish LGBT group Lavender and Green Alliance-Muintir Aerach na hEireann was warmly welcomed onto Fifth Ave by New York City St Patrick’s Day parade organizers John Lahey and Sean Lane. It was a long and winding road first led by the determination of Irish LGBT activists and the warm and genuine solidarity of Mayor Dinkins.

In recent years when we would meet at official gatherings in Gracie Mansion or at the Irish Consulate, I would always thank the mayor for what he did for all of us that March 16, of 1991.

On March 17, 2016, it was important to invite him to join us as our honored guest for the historic moment when we would step onto Fifth Avenue with our banner. A gracious note came back from the mayor’s assistant at Columbia University.

"Mayor David Dinkins would love nothing more than to March with you and celebrate this important victory. However, he is just home from the hospital.  He will DEFINITELY be with you in spirit."

As we joyfully crossed the historic threshold onto Fifth Avenue, Mayor David Dinkins was close to our hearts. His vision of New York as a gorgeous mosaic saw the potential for good in every neighborhood, community, and person.

Mayor David Dinkins was a mayor of compassion, justice, of hope, and unity. As Irish New Yorkers, we will honor and remember how he changed our lives and history.

(Brendan Fay is founder of the Irish LGBT group Lavender and Green Alliance and St. Pat’s for All)