Will Covid come back? Or should we just get on with our lives?

Only time will be the ultimate judge of who was closest to the mark in dealing with Covid. 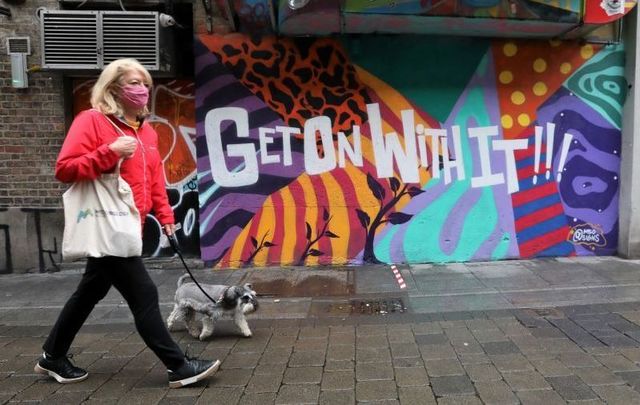 August 2020: A person wearing a face mask passes a mural that reads 'Get On With It' in Dublin. RollingNews.ie

The British government's decision to essentially live with Covid and throw open the gates for outdoor events, nightclubs, theaters, and movie houses to name but a few changes, is a huge gamble by Prime Minister Boris Johnson.

He does so when countries like the U.S. and Ireland are warning that the game is by no means over, especially with a highly infectious new variant on the loose.

One of Ireland’s senior health officials, Paul Reid, stated bluntly that because of the dangerous Delta variant “we must remain alert” as "not everyone is protected yet."

Likewise, President Joe Biden celebrated America’s progress so far but was clear there was a long way to go, especially reaching anti-vax citizens who run a far higher risk of infection.

The message from Dublin and Washington could not have been more opposite to what Johnson was announcing, which is a major liberalization of the U.K.’s Covid precautions.

Many considered Johnson’s remarks as way too optimistic given the new wave. But Johnson has been right before by not waiting around like the European Union did when vaccines for Covid first appeared and he commenced a rapid series of vaccinations while Europe dithered.

Pretty quickly he turned around a bad situation by getting one jab into the arms of millions and holding back on the second one. For a time, Britain was the envy of Europe.

It was an important part of his easy re-election win earlier this year, a sense that voters had a man of action who had taken decisive steps to beat the pandemic.

Is his latest gamble -- to treat Covid like a flu and just live with it and resume life -- another high stakes bet by a leader who seems to relish living on the edge whether in his personal life -- three wives, numerous affairs -- and his political maneuvering? Time will tell.

Whether he is right or wrong seems to depend on which part of the equation you represent. The move is a godsend for businesses in Britain that have, like everywhere else, especially the hospitality trade, fallen on hard times.

On the other hand, the professional medical establishment has grave doubts about lifting all restrictions, especially given the presence of the new variant. They believe that now is not the time to declare victory.

The tension between both viewpoints is understandable but must be resolved.

If you want an example of the difference, take 60,000 British fans packing Wembley Stadium for the European Cup semifinal final in which England played Denmark on Wednesday, and the few hundred spectators allowed at Irish sporting venues at the height of the GAA season. It’s a very vivid contrast.

The Irish medical authorities, certainly compared to Britain, have tended to be arch-conservative in their advice and actual rollout of vaccines.

It now seems it will be August before indoor dining is allowed and, essentially, another tourism year is shot with dire consequences for small operators.

Time will be the ultimate judge of who was closest to the mark in dealing with Covid, the scourge that will go down in history as one of the worst plagues ever.

The smart move, though not necessarily the most popular one, is to wait until the variant is under control. The notion of going back to ground zero lockdowns would be greeted with a mutiny.

A sensible approach where vaccinated people are able to go about daily lives seems prudent. Those who remain unvaccinated must be made to realize the stupidity of their position.

*This editorial first appeared in the July 7 edition of the weekly Irish Voice newspaper, sister publication to IrishCentral.