The trailer for Wild Mountain Thyme makes Darby O'Gill and the Little People look like a serious drama. 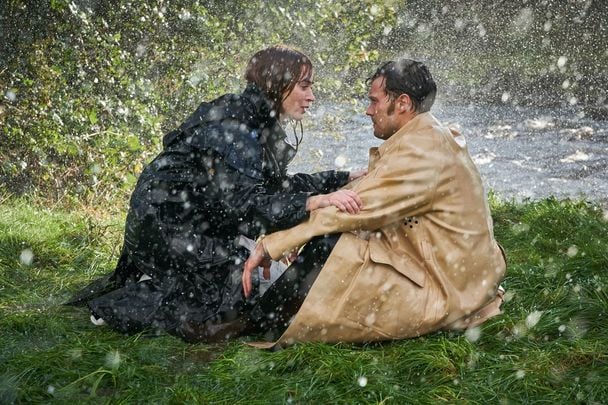 This one has everything Oirish.  It's set on a farm, of course, because that's where all us Irish live.  There's the fiery girl with the flaming red hair, the shy young farmer who talks to his donkey, the mad locals, the row about the land, horses, and cows, the 40 shades of green countryside, and loads of bejapers and begorrahs.

And then there are the Oirish accents, as tortured as Tom Cruise in Far and Away or Sean Connery in Darby.

The problem is that Hollywood still seems to believe there is a single generic Irish accent that encompasses the way everyone here speaks.  There isn't.

Listen to the difference between the Kerry, Dublin, and Donegal accents -- they make English sound like three different languages. It is the attempt to construct such a single generic Irish accent that produces Hollywood Oirish.  Add in a few begorrahs to be sure, to be sure, and you're away with the fairies.

Apart from a slight musicality that is common to the way everyone here talks, there is no single Irish accent.  The differences between the regions are striking given how small the country is.

And it's not just the three mentioned already. The accent in the Midlands, where Wild Mountain Thyme is set, is different again, a lazy intonation that only half pronounces words.  It sounds like someone talking through a mouthful of mashed potato.  If the film had been shot using the real Midlands accent it would have needed subtitles.

The Hollywood Oirish accent avoids this confusingly varied reality.  Throw in the fiery redhead twirling her tweedy skirts.  The simple son who may not inherit the farm.  The Yank who comes visiting.

We can only be in one place, that mythical Oirland invented by Hollywood and loved by us all since The Quiet Man -- and that was 70 years ago.

Now there was a time when this kind of Paddywhackery used to drive people here to distraction.  Suggesting that we all talked like that was almost as maddening as saying we drank too much or we liked fighting, both of which are completely untrue, of course.  It was both outrageous stereotyping and completely inaccurate since no one here talks like that anyway.

We could have been really angry this time.   But the reaction here to the Wild Mountain Thyme trailer shows that we have grown up a bit.

No one here is annoyed or insulted by it. Instead, everyone thinks it's hilarious.

And it's not just the accents.  It's the whole storyline, a gentle fantasy that comes straight out of the Hollywood Oirland and bears no relation to the real Ireland of today.

And when you get that you begin to understand what the makers of this movie are at.  If they have managed to recreate the enormous nostalgic appeal of The Quiet Man -- and we don't know that yet because so far we have only seen the trailer -- they could be on to a winner, one that could become a Christmas favorite.

That, presumably, is why they were able to attract such a strong cast, Jamie Forty Shades of Grey Dornan, Emily Girl on the Train Blunt, Jon Mad Men Hamm, and the legendary Christopher Walken.

Hollywood Oirland is all about romanticizing Ireland and its people for the vast Irish American audience.  It's not real and it's not meant to be real.

That said, there are some contradictions in Wild Mountain Thyme which may grate with audiences looking for a Quiet Man remake.  The accents, costumes, scenery, and storyline may be straight out of the 1950s but there are a few jarring contemporary notes.

Rosemary is the traditional fiery redhead, but at one point she is thinking about freezing her eggs.  What?  Mind you, when the Yank inveigles her back to New York she prefers the mountainy landscape of home to the skyscrapers of Manhattan.  So that's all right then.

The director and screenwriter is John Patrick Shanley, and the film is based on his play Outside Mullingar which was on Broadway in 2014.  He says it relates to his own experiences growing up in the Irish Midlands.

Shanley won an Oscar for writing Moonstruck (starring Cher) so he's been around a while and it's fair to say he knows what he's doing.  But whether Wild Mountain Thyme can eventually transcend the unintended hilarity it has provoked remains to be seen.

The film was shot not in the Midlands, but in Joe Biden's ancestral county of Mayo, although the farm which became the set is closer to Crossmolina than Ballina where Joe's folks came from.

The locals, needless to say, are delighted. They want the movie to be a huge hit with a consequent boost for tourism in the area.   You can already imagine the thatched cottage visitor center, the turf cutting display, the cow-milking lessons, the donkey cart rides, etc.

The locals are even offering to do the Hollywood Oirish accent if it helps!  I think they're joking.

Before we all get carried away on a wave of begorrahs, begobs and bejapers, however, it's worth remembering that this kind of charming nonsense can foster a mild disconnect between the real Ireland and Irish America.   When it rubs up against the brass tacks of reality, it may not help us much.

No one doubts the real connection that Biden feels for his Irish roots and for Mayo in particular.  He has been playing up his Irishness for years.

Last year, when he was running to be the Democratic candidate, he had a tour bus with the slogan "No Malarkey" emblazoned on the side.  He quotes Seamus Heaney.  He constantly refers to his poor Irish Catholic background in Scranton.

He recently barked "I'm Irish!" back at a reporter from the BBC who was trying to get his attention.   Of course, he was joking (the BBC is British and the Brits are the old enemy) but it had a slightly stale resonance.

Biden's awareness of his Irishness is an advantage for us.   But when it gets down to brass tacks, will it make much of a difference?  Two issues come to mind immediately -- Brexit and the US multinationals providing thousands of jobs in Ireland.

Biden has already warned that if Brexit in any way negates the commitment the British made to avoid a border in Ireland they can forget about a trade deal with the U.S. Prominent Irish American politicians and House Speaker Nancy Pelosi have chimed in as well.   It's a serious threat to the British, and Biden's victory has raised some hope here that it might make them pause and rethink the way they leave the EU.

The reality, however, is rather different and has been repeated in this column several times, most recently in September in the following:

"With every passing day the possibility of a no-deal crash out by the U.K. becomes greater.   The Irish Americans who were issuing threats last week need to understand what will happen if that becomes a reality.

“At that point, the Irish government would face a choice -- it can either have an open border in Ireland, or it can remain in the EU Single Market.  It can't have both.

“If there is a no-deal crash out by the U.K. and we're staying in the EU there would have to be a border in Ireland to protect the Single Market.  We would be in the EU but Northern Ireland, with the rest of the U.K., would be out.  That would mean a border and there is no way around it.  And it would be the EU which would instruct us to implement a border without delay."

Threats from Irish America or from an Irish American president-elect don't change this reality.  Even if there is no crash out it is going to be difficult.

This week we are in the final days of the negotiations between the British and the EU, and even if a deal is cobbled together at the last moment it is likely to be a minimal one. That will pose real problems for maintaining the integrity of the Single Market at the Irish border.

There is also the reality of the special relationship between the U.S. and Britain, one that is deeply embedded for reasons you all know well.  Would Biden really destroy that because of a row about possible new arrangements at the Irish border?  It seems unlikely.

Then there is the question about all the U.S. multinationals employing thousands of people in Ireland.   Biden won't be going full MAGA but he is very likely to continue Trump's efforts to get U.S. multinationals to bring their jobs back home, not least to places like Pennsylvania.  That would have a more profound economic impact here than any adjustments at the border.