One woman described the sketch as a "hate crime" and another suggested that Saoirse Ronan's Irish citizenship should be revoked. 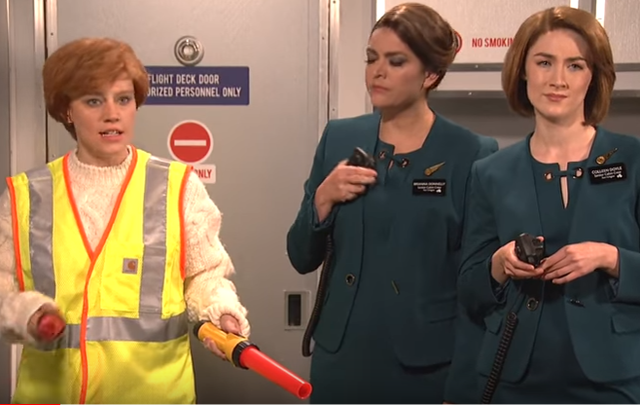 Saturday Night Live turns its attention to Ireland’s national airline this weekend and let’s us say Irish eyes were certainly not smiling.

The clips stars SNL regulars Cecily Strong, Kate McKinnon and guest starred Saoirse Ronan - who found fame in the hit movie ‘Brooklyn’ - and was the only cast member with a plausible Irish accent.

The flight “from Dublin to Cork, making connections to New York City” is delayed by a dog on the runway. Airport employee Kate McKinnon jazzed up in ginger hair and an Aran Island sweater informed passengers that, “We’re going to let the dog choose when he’s ready to move, it’s his will, his story, not ours, do you understand?”

Another hostess informs fliers that on the menu is “potatoes and… also potatoes”.

So needless to say, Ireland wasn’t impressed. Potato jokes became not funny in 1845 and that hasn’t changed since.

The Irish Times panned the sketch but had warms words for Ronan, “Nothing more fully confirms her [Saoirse’s] professionalism than her ability to smile through these increasingly repetitive riffs.”

The take was even worse than anything cooked up by our neighbors across the Irish Sea, “No British sketch show would now even attempt these levels of Paddywhackery,” it opined tritely.

Author Louise O'Neill also oozed irritation at the skit: "The thing that bothered me the most about the SNL skit was the bloody potatoes. After spending a year in America with acne due to the hormones pumped into their food, my tolerance for mocking Irish diets is low. I was constantly asked if we ate anything other than ‘corned beef’ and ‘cabbage’ and ‘POTATOES’, pronounced in an accent Darby O’ Gill would be embarrassed by. Please stop."

Aer Lingus took the skit in good humour and copied nearly word for word one of Donald Trump’s tweets about Alec Baldwin’s portrayal of him.

But others were less happy, with the dog references confusing most twitter users. Had there been a dog in “The Quiet Man”?

What’s up with all the dogs in this sketch? Is there a stereotype about the Irish and their dogs I’m unaware of? #SNL

I don't get it. Is it a stereotype of the Irish that we love dogs more than other countries? There I was thinking I loved my dog by choice... #SNL #AerLingus #SaoirseRonan #dogs

The prominent satirical website, Waterford Whispers News advised horrified Irish people to wash their hands of the show: "And to think, you shared one of their videos earlier in the year. Now, they’ve made you look like a fool. Delete that there off social media to cover your tracks, but not before you get a bit angrier. Jesus, the accents!" it dramatically advised.

Online many seemed to have sympathy with their view.

The Brits occasionally claim Saoirse Ronan, but they never put her through that Aer Lingus sketch on SNL. Let’s never speak of it again.

Imagine if #SNL made fun of people from Iraq or Chinese people as much as they did Irish people last night.

ideo is a hate crime

#SNL - Please, don't let your US actors do Irish accents ever again!... Has anyone in SNL ever been to Ireland, or does #SNL not realize its blatant racism? No one in your cast can do an even approachable Irish accent. Kate McKinnon's was probably the worst. #Cringe

Starting a petition to revoke Saoirse Ronan’s Irish citizenship after that SNL skit. So bad.

I used to like Kate McKinnon. Then I saw that Aer Lingus sketch

But others thought people were over reacting.

The accents in the #SNL Aer Lingus sketch were hilarious! Anyone Irish who is butthurt over it, do you think Russians consider their SNL portrayal as accurate? Or the Aussies? The "It's always funny until it's about me" mentality sucks. pic.twitter.com/KyHuEpUHsQ

What do you think? Is this worse than any skit the Brits have ever written about us or are people overreacting?