In Ireland, "there is considerable dissatisfaction here with the current suppress and mitigate policy rather than going for a full zero-Covid approach." 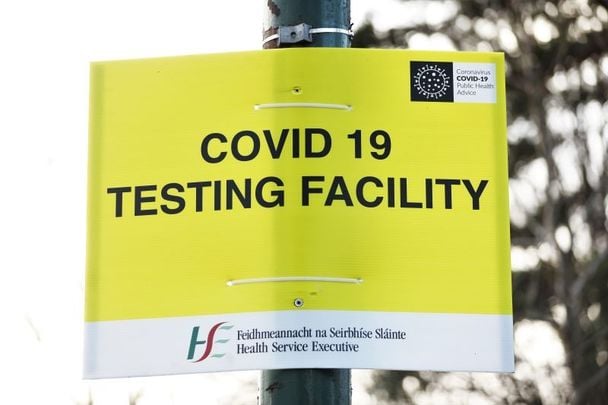 December 31, 2020: A sign outside of a testing center at the RDS Dublin. RollingNews.ie

A fractious debate is now underway here about whether the lockdown in Ireland is restrictive enough to really get on top of the virus.

*Editor's Note: This column first appeared in the February 3, 2021 edition of the Irish Voice newspaper, sister publication to IrishCentral.

We are halfway through the six weeks of this latest Level Five lockdown -- the highest level here with almost everything shut -- and there are signs that it's starting to work. But it's far from certain it will be enough, and some experts are calling for a zero-Covid approach like in New Zealand.

The daily number of new cases here is down a little and in the last few days has been around 1,400 instead of over 2,000, which it was recently. So it's heading in the right direction.

But there were 79 deaths reported on Saturday, the highest daily toll since the virus arrived here. Numbers in hospital are still very high and ICUs are still under severe pressure. We are still in danger of a hospital crisis.

There is also concern among some experts that when this lockdown is over we may only get a short respite before cases start to surge again and another lockdown will be necessary. Much will depend on the vaccine supply here, whether we get enough and can get it into arms fast enough.

If it goes well then we may be in control again by the late summer. But that leaves plenty of time for another surge and another lockdown.

It is for these reasons that there is considerable dissatisfaction here with the current suppress and mitigate policy rather than going for a full zero-Covid approach. A recent survey showed there is a significant level of support for the zero approach taken in countries like New Zealand, Australia, and Taiwan, all islands like Ireland.

The total Covid death toll in New Zealand since the pandemic began is 25. In Ireland it is over 3,300 -- in January alone because of the recent surge there were over 1,000 deaths. So the contrast with New Zealand and its zero-Covid policy is striking.

The zero-Covid approach basically means getting cases down to a negligible level and closing off the country. It means all the Level Five restrictions and a lot more, including a highly effective test and trace system, aggressive intervention when outbreaks are detected, mandatory isolation that is monitored, severe penalties for breaking rules, etc. It also means stopping or very strictly limiting travel into the country.

Our test and trace system here has been poor and was so overwhelmed by the recent surge that it had to be closed down for close contacts of cases. It has now resumed, but that failure exposed just how weak we are.

However, it is the last part of zero-Covid -- strictly controlling travel into the country -- that we have not been able to accept. It's impossible here, the government says. It's essential, says a growing number of our health experts.

That dissatisfaction has now caused the government to act, to some degree at least. Last week new travel restrictions were introduced so that anyone arriving into the country now has to provide evidence of a negative PCR test taken less than three days before travelling here. That applies to everyone.

Arrivals from South Africa and Brazil now have to quarantine in a designated hotel for 14 days. This also applies to arrivals from other countries who do not have proof of a negative test before departure.  If they test negative on arrival they still have to quarantine in a hotel for five days, after which they can isolate elsewhere for the rest of the 14 days. Arrivals from the U.K. have to isolate for 14 days, but can do so in a private home rather than in a designated hotel.

These requirements are no longer just government "advice,” as in the earlier restrictions. They will be backed by law and there will be severe penalties for failing to comply.

But how effective enforcement will be remains to be seen. The details of who will monitor arrivals and quarantining is far from clear so far.

The weakness of restrictions here was evident last week. Already under Level Five lockdown rules, people are supposed to stay within five kilometers of their home unless it is essential travel (for work, food shopping, etc).

Yet on one day last week half of the 800 people who came into Dublin Airport admitted they were returning from holidays. And probably a lot of the others were telling lies about where they had been. A TV report from the airport caused fury among those of us who would love some sun but have been at home obeying the rules.

Some enforcement began last week, with the garda on the approach roads to the airport stopping cars and hitting people with €100 fines if they were more than five kilometers from home and could not prove their travel was essential. This has now being elevated with garda checkpoints inside the terminals checking on arrivals and a €500 fine for those returning from holiday.

Another move being taken is the decision to give the garda power to mount checkpoints five kilometers from the border and stop and question drivers coming from the North. They will have the power to apply €100 fines if the travel is deemed to be non-essential. The border won't be closed and people who travel over and back for work will still be able to do so. But it should dramatically reduce traffic.

All of this sounds like we are belatedly moving towards much tighter control of travel into the country, even if it is far less restrictive than in Australia or New Zealand. And it's about time.

Claims by the authorities that the statistics prove that travel into the country is a negligible factor in the spread of the virus here are unconvincing. The simple fact is that the virus arrived here originally when people came back from a skiing holiday in Italy early last year, and the two successive waves each followed increased travel into the country when restrictions were eased over the summer and before Christmas.

There are two reasons the government says we can't do a New Zealand-style closure of the country. Firstly, unlike New Zealand or Australia which are so far from anywhere, we are very close to the U.K. and Europe and closely interlinked with both for massive trade and travel on a daily basis.

Secondly, there is the border. Completely sealing that off is not feasible. That means we would need the unionists in the North to agree to an all-Ireland approach to keeping the virus out, shutting down travel to mainland Britain. That is not something they would accept.

To be fair to them we have not been very helpful either, since we have been refusing to pass on locator forms of travelers arriving in Dublin Airport who give Northern addresses, seemingly because of EU data protection rules. The fact is that the authorities both North and South have failed miserably to coordinate their responses to the virus, the first step in reaching a one-island strategy and making a zero-Covid policy possible.

Despite these difficulties, however, a growing number of experts here believe a one-island, zero-Covid approach should be possible. And it would be if we all acted like grown-ups instead of prisoners of history.

It's a matter of life and death, after all. What is more important than that?

The hope of the government is that the vaccines will make zero-Covid action unnecessary. In the meantime, they are hoping the new tougher restrictions will get the virus under control again.

Ireland is part of the joint European vaccine buying program being run by the EU Commission which has turned into a catch-up nightmare thanks to the incompetence of the Brussels bureaucracy. By Sunday night Britain had vaccinated over nine million people or almost 14 percent of its population. The average across the EU countries including Ireland is two to three percent.

Even the much-criticized vaccine rollout in the U.S. has now reached around eight percent of its population, thanks in no small part to the early and aggressive buying of vaccines by the Trump administration -- not that you will get the Democrats to mention that!

The EU Commission, in contrast to the U.K. and the U.S., has been slow and cautious, bound up in their usual red tape. They were more than three months slower than the U.K. in ordering the Oxford-AstraZeneca vaccine partly because they were arguing about the price (even though the vaccine is being provided at cost) and about public liability if anything went wrong. Then they delayed for several weeks before they eventually gave approval for its use last Friday, long after the U.K. had given its approval and had already vaccinated millions of its people.

The delays were so bad that countries like France, Germany, and Italy are furious with the commission and particularly its president Ursula von der Leyen who took personal charge of the vaccine sourcing program. The idea had seemed good, getting the EU Commission to order vaccines for Europe rather than have all 27 member countries bidding against each other.  But it turned into a mess because of the delays by the commission.

That did not stop the commission trying to shift the blame on to AstraZeneca when the company revealed two weeks ago that because of production difficulties at its plant in Belgium it would be able to deliver less than half of the 100 million doses it had promised to Europe by the end of March. Von der Leyen then demanded that AstraZeneca divert supplies from its plant in the U.K.  In other words, she wanted to forget about the three-month delay in ordering and jump up the line.

That typical EU arrogance has been a gift to the Brexiteers in the U.K., and Prime Minister Boris Johnson has insisted that the U.K. order must be fulfilled first since they had ordered first. In response, the EU has been making veiled threats about curtailing exports of the Pfizer vaccine to the U.K. from a plant in Belgium even though the U.K. had ordered those supplies in good time.

It was in that context that von der Leyen took a disastrous step last week. She triggered a clause in the Brexit withdrawal deal to stop any attempt to move vaccines across the Irish border into Northern Ireland in case they ended up in mainland Britain. Not that this was ever likely to happen.

In effect, she was implementing a hard border in Ireland -- at least for vaccines -- despite the Northern Ireland Protocol guaranteeing that this could not happen. And she did this without giving any advance notice to the government here or in the U.K.

There was such an outcry that hours later this was reversed. But it was a salutary lesson for us.

The sad thing is that these are the people we are relying on to deliver vaccine supplies to us in a fair and timely manner.