Mr. Edmund Honohan was one of the brave few establishment voices who sought to expose what those funds were up to. 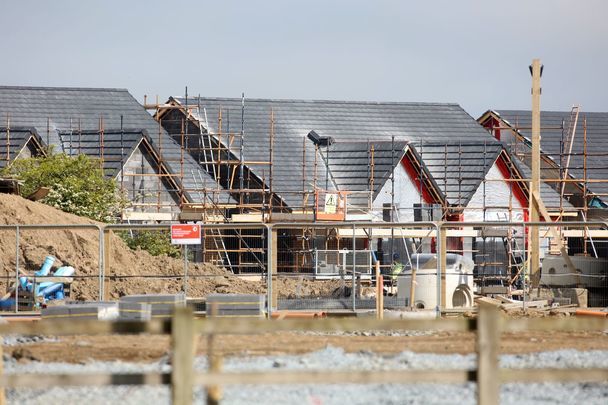 Construction work taking place in the Bay Meadows housing development in Dublin 15. All 112 houses have been bought by global investment company Round Hill Company, to be put on the rental market Rolling News

The retirement of the Master of the Irish High Court, Mr. Edmund Honohan is a blow for all those who have opposed vulture funds from the US operating in Ireland.

Honohan was one of the brave few establishment voices who sought to expose what those funds were up to.

Honohan fought to alert innocent American and Canadian investors, who had lent their money to the Vulture Funds, as to just how these Vultures were using their pension contributions and ultimately their retirement funds in an unethical way.

The Master’s due process "disruption" of the debt and eviction lists after the crash bought time for the Government to rewrite the law to give the Courts new powers to refuse foreclosure of family homes and for loan writedowns to become the preferred option. A predicted tsunami of evictions was thereby averted.

A legend in the Four Courts, Edmund Honohan was well known for taking on vulture bank’s lawyers and putting them in their place

Edmund Honohan will not just be missed for his ferocity in dealing with errant bankers and vulture fund lawyers but will be missed by the many people who knew his true mission while sitting as the Master of the High Court.

To the establishment, Ed was a pain in the butt, but to many others, he is and was a national hero.

By 2008, America had already been sucked dry by the very same Vulture Funds (Wall Street) and they needed to find new feeding grounds. With the help of the Irish Department of Finance, the Vultures discovered a whole new roadside kill, ripe for the picking, from the bones of thousands of Irish people whose lives had been turned upside down by the same people now making these key introductions.

Many ordinary people who never recovered from the “crash” were hauled in front of the Courts using legislation that was intended to help remove them from their homes, and businesses, in a summary manner, thereby giving the Vulture Funds a distinct advantage where those with nothing in their pockets were left facing heavily armed legal teams, sent out from the Financial Services Centre by the Vultures to chew on the marrow of their victims.

Most people facing the Courts had no legal representation and were effectively thrown to the vultures by a certain clique of judges,.

While some judges and legal eagles, were somewhat sympathetic to the plight of potential evictees, they were very limited in their ability to help.

Honohan soon began to see the odds were unevenly stacked against distressed homeowners and in effect became a proxy defense barrister for the homeowners, whenever he saw fit or could effectively do so.

Many Judges, and the legal fraternity, saw the Master as an obstacle or thorn in the side of their version of justice, as the Master continued to speak out and eventually found himself silenced

The Master was relieved of a critical function of his duties which was to adjudicate or make decisions on all debt-related cases coming into the High. Still, the Master spoke out and refused to be silenced.

The legal fraternity was often humiliated when the Master took them to task for their lies and oft fraudulent attempts at taking property from people, using very questionable paperwork.

Before the Master’s intervention, judges in both the Circuit and High Courts were handing out eviction orders like candy to children, and those children [being the many plaintiff legal teams] ran happily back to their banking and Vulture Fund parents, with said possession orders in hand, taking their pocket money and knowing that the parent would be more than generous in their handouts, so kept running back to the Courts for more and more pocket money.

They didn’t even have to wait until Friday when their ‘parents’ got paid.

Ed Honohan’s interventions began to put manners on the many legal teams representing the Banks and Vulture Funds, and in doing so became a target for all of them.

What this showed was that money was now their God and justice was only something for the deserving rich people who could afford to hire them.

To the very last, the Master stung the VFs with a series of decisions that really hurt. Edmund had become an even bigger enemy to the establishment when he issued several such decisions that showed how the government had lied and indeed helped change an old and established law of hearsay evidence to suit the Vulture Funds when lodging papers that were mostly full of useless hearsay evidence.

The Vultures were finally stopped in their tracks by a judge who cottoned onto the fact that for years hearsay evidence was being used to influence major judicial decisions.

Thousands of people had lost their homes and businesses due to the simple fact that hearsay evidence was a critical factor in a plaintiff’s case.

People who had lost their homes, and businesses, before the nefarious implementation of “The Civil Law and Criminal Law (Miscellaneous Provisions) Act 2020 – Admissibility of Business Records in Civil Proceedings” - which was introduced into law by the Government parties [using Covid as a cover], all of whom may now have a case to sue the Vulture Funds and their legal representatives, and the State, for fraudulent misrepresentation.

Just a few days past his retirement, the Master helped launch a new Bill called the “Impaired Farm Credit Bill 2022” in the Dáil. This bill, drafted by the Master and put into plain English by this writer for the benefit of those TDs who don’t readily understand legalese, is designed to stop the Vultures and Receivers from taking farms and selling them unbeknownst to the owners.

Will unrepresented people now be thrown to the wolves without a voracious human rights defender such as Edmund Honohan fighting their corner?

The possibility is that the answer to that question is YES, that that precisely is what’s likely to happen.

The Government and the Central Bank are under orders from Brussels to clean up the carcasses of those left in the fight to save their homes, and the judiciary is going to follow orders unless they are challenged by greater legal minds who have human rights at the heart of their arguments.

Edmund Honohan sees access to justice for those with little or no money as the big bugbear, as does the now-retired Chief Justice of the High Court, Frank Clarke.

The Master had also hit out at the abuse of Land Registry by legal teams representing the Vulture Funds. Property is still being registered by servicing agents who then claim legal title enabling them to take court proceedings which the Vulture Funds cannot legally do themselves. This is a fraud being perpetrated upon vulnerable people who do not and cannot access justice to help fight off such scurrilous claims.

Even the judiciary is unwilling  to look behind Land Registry in cases where they might be forced to call “a fraud a fraud.”

Not one to go quietly into the night, but rather currently enjoying a well-deserved rest, Edmund Honohan, the fearsome white knight of the Four Courts, may well soon don the lawyers’ gown and wig once again, but this time on his feet rather than behind the bench and all for a good cause, access to justice where little or none currently exists.

There is renewed hope that Honohan will return to the battlefield on behalf of the dispossed albeit in a different role. That is good news indeed.