In the middle of a housing crisis, vulture funds are being allowed to buy up entire housing estates in Ireland. 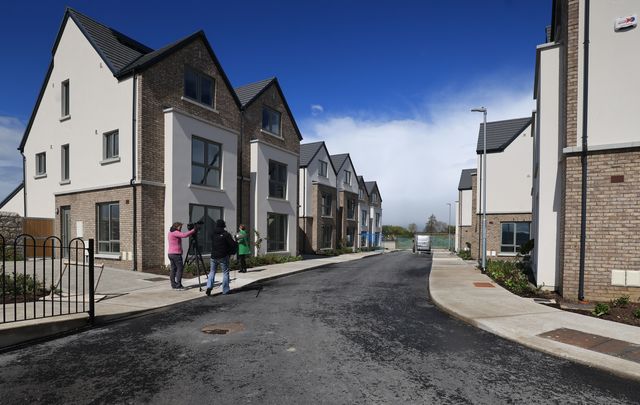 Just as Ireland comes out of lockdown, the government launched a new plan for housing, swamped by the cuckoo fund revelations, and it seems that Ireland's housing nightmare is just beginning ... but what's the solution?

With Covid figures way down, vaccinations powering ahead, and the country starting to open up again, the Irish government must have felt they had turned a corner. The country would be grateful when the nightmare was over. Re-election might be possible after all, in spite of the rise of Sinn Féin.

But that was before last week when the news broke about a foreign investment fund that had bought almost all of the houses in two developments near Dublin, new homes that would have been perfect for first-time buyers and families.  That changed everything. Allowing this to happen in the middle of our housing crisis enraged everyone.

The fury was directed straight at the government. Any chance of a bounce for beating Covid disappeared.

Housing was back at the top of the agenda. Soaring house prices, exorbitant rents, young couples giving up on ever being able to buy a home -- the housing nightmare was back in full focus again.

The revelation that foreign funds were buying up hundreds of new homes here to rent, pushing out individual buyers, and condemning them to a lifetime as tenants, was the last straw. The housing mess here may be complicated but this was outrageous, something everyone could understand and be angry about.  Ministers were visibly rattled in the Dáil as they tried to explain it away.

But when you're explaining, you're losing. This was not government policy, they said. Something would be done, they promised.

Give us time, they begged. It all sounded feeble and unconvincing.

Sinn Féin and the left piled on, ridiculing the government record. Their solution was simple. Keep out the foreign vulture funds and build tens of thousands of social housing homes every year. The government parties won't do this, they claimed, because it does not fit with their free-market ideology.

It's not as simple as that, of course. The foreign investment funds are not all vulture funds, swooping in to bulk buy distressed property portfolios at rock bottom prices before selling on again after a few years.

The cuckoo funds (so-called because they push ordinary house buyers out of the property buying nest) are in for the long haul. Many of them are big pension funds in search of a steady return on investment over many years, which is why they are attracted to rental property.

If it was easy to solve our housing crisis Fine Gael and Fianna Fáil, the two parties which have been in power in one form or another for the last 10 years, would have done so by now. But it's far more complicated than the simplistic, populist solutions offered by Sinn Féin and the left.

The roots of the crisis go back to the property crash over a decade ago. Back then, our banks were bust, the country was bankrupt and the government was desperate to get foreign investment in to buy up bad property loans, finish housing projects and get the market functioning again. To do so international investment funds were given big discounts and tax incentives.

The deals they were given may make people angry now.  But it's easy to forget that at the time no one else was willing to invest in property here.

Now that the market has recovered and prices are soaring it's time to end these deals. But even now, the funds have a role to play.

Developers here are still finding it hard to get finance. Having been burned once, banks are very cautious about property lending.

These days a builder tells his bank he has a site for a few hundred houses or apartments and needs, say, €50 million to build them. Usually, the answer is no. If it is yes, the bank says here's €5 million, build and sell the first 20 and then come back to us. And all kinds of guarantees and conditions are required.

This makes it more difficult and expensive for the builder. It's far easier if he can pre-sell the whole development to an investment fund.

In some cases, the reality is that the development would never be built without the investment fund money. So one can argue that the involvement of these funds is beneficial.

However, it's one thing when a fund finances a big block of apartments that otherwise might never be built.  But it's another thing -- now unacceptable both to the government and everyone else here -- when entire housing estates which have been completed are then sold to a fund without being offered to individual buyers. There are legal difficulties involved in reversing this trend, but the government was so alarmed by the reaction last week that it is determined to act.

Funding is not the only problem and it's not the only reason we are building less than half of the 35,000 to 40,000 new homes a year we need. Labor is still a big problem. We lost the bulk of our construction workers after the crash a decade ago.

In the past year, we lost more when Covid closed construction sites here and skilled workers went to the U.K. where many sites remained open. Getting them back is not easy and not cheap, with boom-time pay being demanded.

Then there's the cost of materials, with cement, bricks, timber, steel, and so on soaring in price here. Why this should be is hard to explain beyond the fact that everything in Ireland seems to cost more than elsewhere.  And no one can explain why it costs twice as much to build a house in Dublin as it does down the country -- the bricks are the same price.

Add to that the ongoing difficulties with our planning system, which is slow and complex. Just a week ago, for example, the High Court overturned permission for 657 homes on what used to be sports grounds attached to a school on the north side of Dublin. Locals objected because they like the green space, even though the land is next door to one of the biggest public parks in the city!

This development has now had four decisions by the planning board and it's been taken to court 10 times. It's still stuck in the process and may never be built.

It's typical of what happens here, with NIMBYs (Not in My Back Yard objectors) rushing to court, backed by local politicians. The last minister for housing tried to get around this by allowing larger developments to bypass local councils, but legal challenges still abound.

The present minister for housing last week launched a new plan for housing (which was swamped by the cuckoo fund revelations). We already have an income tax refund scheme to give a boost to first-time buyers.

One of the new proposals is a shared equity scheme in which the state will pay 20 percent of the cost and the home buyer will eventually buy that out with a very cheap second mortgage.  There are also new rules for developers on how much social and affordable housing they must-have in new schemes (which can inflate pricing in the rest of the development).

The problem is that all this is aimed at boosting the ability to buy rather than boosting supply.  For that reason, it can just drive prices up even more.

Already Central Bank lending rules here mean that most people cannot borrow enough to buy.  The limit here is two and a half times salary, although in the U.K. it is up to five times salary.

The core problem is the lack of supply and the multiple reasons why that cannot be turned around quickly.  The most fundamental reason, now made worse by the cost of Covid, is that the state does not want to borrow even more billions to throw at the housing problem. It would prefer private funding and the market to do the heavy lifting.

Sinn Féin and the left don't agree with this. They want the state to embark on a massive social housing building program. But there are problems with this approach as well.

Decades ago county councils all around the country used to build thousands of social houses (or council houses as they were called) every year. They don't do this now and there are reasons why.

The rents payable were related to household income and typically were around a third of the going rate. Many tenants under-declared income. Many others fell behind in rent payments.

Today in Dublin, for example, massive levels of rent arrears have built up which will never be paid. Evicting tenants is not seen as a solution since they may become homeless.

Another problem was maintenance costs. The dependency culture meant that council tenants did little or no maintenance, expecting the council to fix everything. This and rent arrears proved so expensive that councils found their budgets were being eaten up by housing, leaving them unable to do anything else.

The solution was to allow tenants to buy out their council homes at a fraction of the market value. So the housing stock that councils once had was rapidly diminished.

The inefficiency of council construction staff also meant that it became far cheaper to hire outside contractors to build social housing. The result is that today councils do not have the staff to do large building programs and are dependent on the private sector. Which then runs into the same supply problems.

Yes, more social housing is desperately needed and would help to take the heat out of the lower end of the market. And yes, it is true that the state could borrow extra billions at current low-interest rates to fund it. But it would need to be run in a completely different way.

Accurate assessment of household income, speedy evictions for non-payment of rent, ending the sale of social housing stock at discounted prices, children no longer being allowed to "inherit" the right to rent parents' council house, income limits for households so their homes can become available to poorer families -- all this and more would be required to make an expanded social housing system work properly.

Whether socialist Sinn Féin and the left have the bottle to do this is doubtful. We could end up pouring billions into social housing without solving the wider problem.

An additional and more effective strategy would be to have the state guarantee bank loans for private builders so they have access to all the funding they need without delay. Once the supply increases, prices will moderate and the crisis will ease.

Is this possible? During the pandemic, banks would not lend to businesses here. So the government stepped in with the Credit Guarantee Scheme through the state-backed Strategic Banking Corporation of Ireland to stop them going under. The same can be done on housing.