Amidst a "tricky" few weeks, sorry is the hardest word for Sinn Féin. 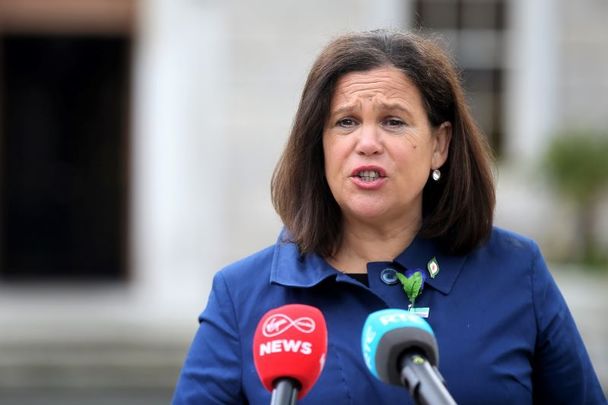 It's been a tricky couple of weeks for Sinn Féin.

Most notable was the news that the party leader Mary Lou McDonald had sent her condolences to the Queen on the death of Prince Philip. This was seen as somewhat surprising, a welcome development, and an indication that Sinn Féin are moving into a new, more compassionate stance.

Sincere condolences to Queen Elizabeth and family on the death of her husband Prince Phillip. Sympathies to those of a British identity on our island, for whom his death will be felt as a great loss. Ar dheis De go raibh a anam dilis.

But how accurate is that? The condolences to the Queen came just days after McDonald was asked in an interview whether she would apologize to Prince Charles for the murder of his beloved great uncle, Lord Mountbatten, when the IRA blew up his fishing boat off the Sligo coast in 1979.

Her response did include the word "sorry" and in some quarters that was hailed as a breakthrough. It was interpreted as a direct apology for the callous IRA attack on Mountbatten's holiday boat (two innocent children on board also were killed).

But was it? As always, sorry is the hardest word for Sinn Féin.

What McDonald actually said was as follows: “The army and armed forces associated with Prince Charles carried out many, many violent actions on our island. I can say of course I am sorry that happened. Of course, that is heartbreaking. My job, and I think that Prince Charles and others would absolutely appreciate this, my job is to lead from the front now, in these times.”

Note the careful choice of words. She is sorry that it "happened.”

This is close to suggesting that it was some sort of unforeseen accident or that it was not deliberate or that no one was responsible. Added to that is the context she puts it in which implies that it was one of those unfortunate and tragic things that can "happen" in a war.

So we are back to the "everyone suffered" justification. It was not a condemnation of the IRA action and it was not an apology.

The tone may be more conciliatory than when Gerry Adams was answering questions about Mountbatten, but the message remains the same. McDonald has to keep the men in Belfast happy -- the ones who still control both the dormant IRA and Sinn Féin, according to the police chiefs both in the North and here in the south. And doing that means no apology ever for anything that was done during the IRA campaign.

From their perspective, this makes sense. If they allow an apology for an atrocity like the Mountbatten bomb, where will it end?  And given that the IRA gang went ahead and blew up the boat knowing that there were other people on board, including the two boys who died, it was clearly an unjustifiable atrocity.

But if they apologize for that, what about the two boys blown up by the rubbish bin bombs in Warrington? What about the countless other unspeakably cruel acts, the knee-cappings, the savage beatings, the torture, and the murders?

What about the so-called collateral damage, all the innocents who were maimed or killed by the IRA's incompetent bombings and their ham-fisted warnings?

So rather than opening that can of worms, no apologies. Stick to the mantra. Everyone suffered. Bad things happen in a war (even if it was a "war" that had no legitimacy because the vast majority of the people on the island of Ireland were against it).

It's a tricky one for McDonald. She has to keep the boys in Belfast happy and the hardline Shinners. But she also needs to give the impression that Sinn Féin has changed so that middle-class Ireland will feel comfortable voting for her party.

That more conciliatory stance requires gestures like the message of condolence to the Queen. It requires a shift to a more empathetic tone, with the emphasis on all the suffering that "happened,” how regrettable it was and how we all must "move on" and create a better future.

That's all understandable and even welcome because it represents a degree of progress, even if it is minimal. But there's a limit. And outside that limit is an acceptance that any apology is necessary for anything the IRA did.

The new conciliatory approach from Sinn Féin -- and this was no coincidence -- was also evident when the Sinn Féin leader in the North, Michelle O'Neill, paid tribute and expressed her condolences after the death of Prince Philip.

In a special press conference, she acknowledged the way the royal family had worked for peace and reconciliation in the North in recent years despite their "personal loss,” a clear reference to the Mountbatten murder.

As Deputy First Minister I wish to extend my sincere condolences to Queen Elizabeth and her family on the death of her husband Prince Phillip.

Like McDonald’s remarks, O'Neill's statement was seen as generous and genuine. But she sticks even closer to the "no apology" script. And there are limits to how far she is prepared to go herself to promote peace and reconciliation.

In a lengthy interview on RTÉ's Late Late Show last week, O’Neill was asked about the introduction of integrated schools in the North. This is seen as a crucial step in breaking down the sectarian division in the North, especially in the large working-class areas that are still separated by peace walls. The kids who grow up in these areas have little contact with kids from "the other side," and we saw what this can lead to in the recent riots.

With more than 90 percent of children across the North educated in separate schools -- either Catholic or Protestant -- this would seem to be the essential place to start if the aim is to build a tolerant, integrated, peaceful society there in the future. But O'Neill does not see it that way.

In her interview, she said that although there is a role for integrated education, it is not the panacea. "A secular education is where we all want to be, but the problems of society cannot be hung on the education system," she said.

She went on to explain that she sees the separated schooling system as a reflection of society in the North rather than the other way round. Of course, she has a point.

But if there is to be a fundamental change in society in the North, it will require bold and courageous thinking (remember desegregation busing in the U.S.?) and it is disappointing that O'Neill is unwilling to be proactive on this difficult topic. Her view is very much that of the Sinn Féin community organizations and "community activists" who -- using huge amounts of state money -- are more interested in preserving the identity and culture of their areas rather than promoting cross-community efforts. (To be fair to them, the loyalist side is just as bad.)

Another issue in a tricky couple of weeks for Sinn Féin has been the revelations about their secret and highly sophisticated database on millions of voters in Ireland. All parties here have access to and use the electoral register, giving the names and addresses of all registered voters.

But Sinn Féin has taken this to a new level, shifting the information into its own database and using Facebook and possibly other sources to identify the perceived voting intentions of individual people. This information can then used to target possible supporters in doorstep canvassing.

The system even has a name -- Abu, the Irish word for forever -- but it has run into problems because of data privacy laws. The data commissioner here has been on to Sinn Féin with questions. Apart from the secrecy and the possible intrusion into privacy, what has unnerved many people here is that the database was being stored first in the U.K. and now in Germany, and also that IT experts from Serbia and elsewhere have been working on it.

The Irish Independent newspaper got its hands on a slide made to train Sinn Féin activists on how to use the system, particularly the cross-referencing with social media platforms. The slide advises that Facebook will show the name of a person to a canvasser and “roughly where they live,” the paper reported.

“By engaging with them you may be able to elicit more specific information that will help you pinpoint them in the real-world,” the slide says. “You can use the search function in the Abu system to find the person you have engaged with online, tag them as a social media engager, and follow up with a canvass on their doorstep.”

The government parties here have been playing this up as another reason why Sinn Féin cannot be trusted. There is also the question of how it is being financed.

Fine Gael Senator John Cummins commented, “This just seems to me like Cambridge Analytica meets Ardoyne via Serbia, Frankfurt, Manhattan, and London. I suspect even Edward Snowden would find it difficult to get to the bottom of this sophisticated cyber operation.”

No doubt there is a degree of exaggeration involved here. But it's all indicative of the absolute determination of Sinn Féin to capitalize on their dominance in the polls here and to make it into the next government, possibly with McDonald as taoiseach.

Given the current dissatisfaction among voters with Fianna Fáil and Fine Gael due to the Covid lockdowns, the slow vaccine rollout, and all the traditional issues like housing, that is very possible. But it's much too early for Sinn Féin to be counting any chickens.

Apart from the IRA legacy and whether they can be trusted, one of the main problems Sinn Féin faces is credibility on the economy. At the moment they are playing the populist game, promising everything from building 100,000 homes to a free national health service. All to be paid for by massive increases in tax which someone else will pay rather than their voters.

The reality is that electing a populist, socialist, extreme nationalist party, which is what Sinn Féin is, would be a disaster for Ireland and its economy. Most people here get that.

They also realize that behind the smokescreen of their verbiage about how poorly the country is being run, Sinn Féin is in reality a one-issue party -- reunification. Nothing else really matters to them.

Their problem is that reunification is not at the top of the agenda for most people here. When Covid recedes and the huge financial gaps it leaves in its wake become unavoidable we will face enormous problems, made even harder by trying to deal with the housing crisis and so much more.

Despite all their populist promises, will people here really trust Sinn Féin to cope with all that?