Despite mandatory hotel quarantine and a slow start to its vaccine rollout, Ireland is well on track to getting back to something approaching normality by the summer. 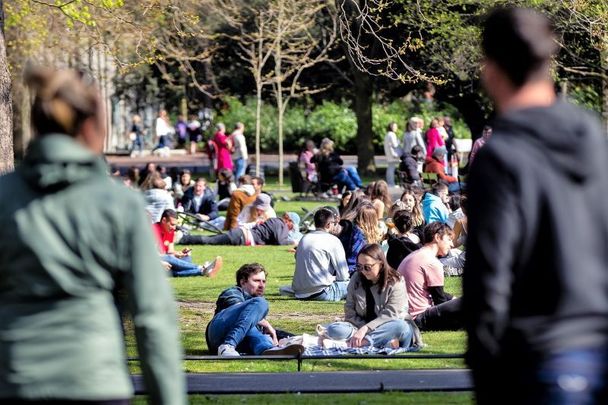 At the start of last week, Ireland announced that anyone coming here from the U.S. faced 12 days of Mandatory Hotel Quarantine (MHQ).

*Editor's Note: This column first appeared in the April 21 edition of the Irish Voice newspaper, sister publication to IrishCentral. You can find more information about Ireland's mandatory hotel quarantine here.

And that's no fun, being greeted by Irish Army troops at the airport, escorted on to a special bus, and then confined to a hotel room for the period, with minimal exercise breaks and meals left on trays outside doors. Like being in prison is how it has been described.

Why the U.S.? The reasons have not been spelled out for individual countries but they seem to be based on Covid case rates and outbreaks of new variants.

And it's not just the U.S. Also added last week to our so-called "red list" of countries that trigger MHQ here were five EU states, including France and Italy.

Our red list, which was introduced over three weeks ago, now runs to 75 countries. Not surprisingly, the system has struggled to cope.

Despite empty hotels all over Dublin, the advance booking required before flying had to be temporarily suspended because we ran out of contracted rooms. It has now been restored with the addition of extra capacity. But confusion and resentment still reign, and the government has been heavily criticized for failing to organize the system properly.

Much of this criticism has come from opposition politicians, even though they were the very ones who were loudly demanding as far back as January that an MHQ system like in Australia needed to be introduced here immediately.

Whatever about that, it is now clear that the government did not plan very well, including getting gardai to enforce quarantine at the designated hotels.

Neither the army nor hotel security staff have the legal power to prevent people from leaving. So there have been several examples of people absconding before being caught by gardai and brought back.

There have been a number of court cases with people challenging their quarantine for various reasons. And there have been numerous cases of people who arrive and say they cannot afford to pay the $2,000 cost of MHQ, which leaves the state picking up the bill.

The bigger question, however, has been whether it is all necessary. One can understand restrictions on people arriving here from high-risk areas in South America or Africa.

But are we really that much better than the U.S. or countries in Europe? We are the only country in Europe to be enforcing MHQ and it has not gone down well with our EU partners who want a Europe-wide agreement on travel management.

Added to that is the fact that we cannot fully enforce the system here anyway because of our open border with Northern Ireland. Stories abound of people dodging our hotel quarantine by flying into Belfast after transiting through London and then travelling south by bus or cab. Taxi drivers at Belfast Airport have been offering special rates to groups of people flying in and then heading down to Dublin.

That may now be reduced somewhat since the North is also introducing MHQ. But the U.K. red list is much shorter than ours, so that still leaves a gap in our system.

One of the main complaints made about the system is that it was over-restrictive, refusing to make an exception for people who have been vaccinated and have had negative tests before flying. They were still being forced to do the 12 days of MHQ.

Over the weekend the government reversed this so that fully vaccinated people are now exempt. Anyone arriving with proof of full vaccination and a negative PCR test will now not be required to do MHQ. But they will still be required to quarantine at home or wherever they are staying here.

So overall it's a mess. The objective was to discourage people from traveling at all but that has not worked because thousands of people have flown in here since MHQ was introduced.

Equally confusing has been some aspects of our vaccine rollout. In fairness to the government, this is mainly due to the failure of the EU to provide a steady supply of vaccines. But we also now have a high degree of hesitancy about the AstraZeneca vaccine here due to decisions we have made.

You will remember that initially, like the rest of the EU, we were being told that the AZ vaccine was more suitable for older people. Then that was changed to it being better for younger people and older people here were given the Pfizer instead.

Now that has changed again following revelations about the very minimal number of cases of blood clotting in younger people in some countries. Starting this week, all those in the 60 to 70 age cohort are being given the AZ vaccine, and many of them are unhappy or even fearful about it.

In fact, we are not that different than other European countries in doing this, with a number of them now giving AZ only to those over 60 or 65. The reason the authorities here were so specific about confining it to the 60-70 cohort is that all of our over-70s have now been vaccinated with the Pfizer jab. But the communication of this by the government has been poor which has fueled hesitancy and resentment among the 60-70 group.

This has not been allayed by the threat made last week by some government ministers that people in this age group who refuse the AZ vaccine will be put to the back of the line for vaccination and may have to wait weeks or even months to be vaccinated as a result. There is a suspicion that the real reason this is being pushed is that we are due 800,000 AZ doses, enough to give the 400,000 people in this age cohort their two shots. And since the current view is that it is less suitable for the under-60s, much of this would go to waste if many of the 60-70s refuse to take it.

From the government's point of view, this would be a problem because it would seriously impact its declared target of getting at least 80 percent of the population vaccinated by the end of June. Much political capital is riding on the fulfillment of that promise.

If achieved, it would allow a substantial reopening of the economy and society here and would be seen as a major achievement and a justification for our lockdown, the longest in Europe. It could reverse the fortunes of the government, now struggling badly in the polls.

One piece of good news we got last week was the announcement by the EU that Ireland is soon to get an extra half a million Pfizer doses. This would be a boost in getting jabs into younger cohorts in the population.

But it is likely that people in the 60-70 cohort will be demanding that it should be given to them instead. This will be a sensitive and tricky issue for the government to resolve in the coming weeks.

Overall, in spite of these specific problems and the criticism and frustration they have caused, our vaccination rollout has been progressing well and is having an effect. So also are our continuing severe lockdown restrictions, although they have been eased slightly. The result is that our daily case numbers, Covid patients needing hospital, the number in ICUs, and the number of deaths are all way down.

We are well on track to getting back to something approaching normality by the summer. To ensure this happens, the government is also considering the idea of lengthening the gap between first and second vaccinations, given what we now know about the high level of protection provided by the first jab.

If this is done some of the experts are predicting that we could get vaccines into 80 percent of the population by the end of May rather than the end of June. No decision has been taken on this yet. Instead of three or four weeks between shots, it would mean eight or even 12 weeks.

That might not be necessary anyway if other vaccines enter use here. The one-shot Johnson & Johnson vaccine has already been approved by the European Medicines Agency (EMA) but so far has not been used in the EU.

The EMA is due to give further advice on it on Thursday of this week following some concerns in the U.S. about very rare blood clotting events similar to the AstraZeneca cases. If the J&J jab gets the go-ahead it will be important here because Ireland has ordered substantial quantities.

Meanwhile, glorious spring weather in the last week or two has seen more people here out and about, going to beaches and parks and getting their takeaway pints of the black stuff to enjoy sitting down in the sunshine. Better days are coming.