Sinn Féin TD Brian Stanley has come under scrutiny for a recent tweet that glorified the IRA. 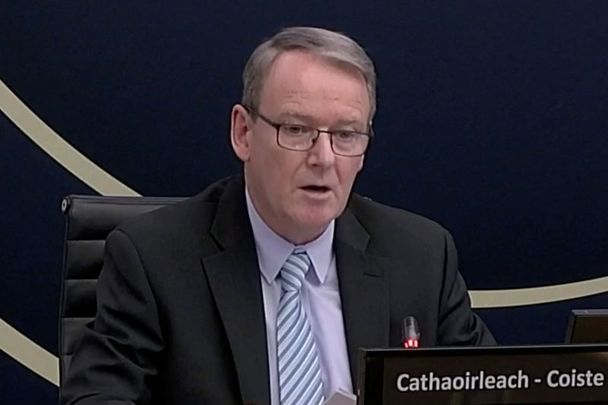 MOST of you will never have heard of a Sinn Féin member of the Dáil called Brian Stanley.  In fact most people in Ireland were probably unaware of him until last week, even though he is chairman of the Dáil Public Accounts Committee which keeps an eye on how state money is spent.

Last week, however, all that changed when a tweet by Stanley became the center of a massive dispute about Sinn Féin and the way it is trying to normalize the murderous "war" waged by the IRA in the North during the Troubles.

In the tweet he referred to these events as “the 2 IRA operations that taught the elite of d British army and the establishment the cost of occupying Ireland. Pity for everyone they were such slow learners.”

Appearing to glory in the bloodshed involved, this put forward a view that most people here these days find offensive, even nauseating.  It is deeply disappointing and worrying since Sinn Féin is now a major party in the south and very likely to be part of the next government.  With that in mind, they should be promoting reconciliation on the island rather than trying to justify the IRA atrocities of the recent past.

What they are doing, as in Stanley's tweet, is attempting to create a historical narrative that links the War of Independence with the recent campaign in the North in an unbroken continuum of glorious revolution.  Any such linkage is bogus.

The War of Independence, 100 years ago, had wide support from the Irish population.  The recent 30-year campaign waged by the IRA in the North had almost zero support in the south and very limited backing in the North.

Unlike 100 years ago, there was no mandate for what the IRA did during The Troubles and the indiscriminate violence they perpetrated was despicable, with their no warning bombings, sectarian executions, proxy bombs, knee-cappings and all the rest of it, murdering civilians including women and children, even terrorizing their own nationalist communities.

This attempt to rewrite history has gathered pace recently.  It's made easier by the fact that we have a young population here, many of whom were either not born or were very young when the Good Friday Agreement was signed in 1998.

They have no memory or knowledge of what happened during the recent IRA campaign and so are easily misled by Sinn Fein's depiction of a heroic struggle.  For them Warrenpoint is ancient history, just like Kilmichael.

The wiser, older heads in Sinn Féin know how to play this game without saying too much.  But even among them the mask slips now and then into outright glorification of the IRA.

So we had Sinn Féin Dáil member David Cullinane's "Up the Ra" cry at his election celebrations, the Covid-defying mass funeral for IRA hard man Bobby Storey attended by the Sinn Fein hierarchy, Stanley's tweeting, and so on.  Among the lower ranks of Sinn Féin it's more overt, as you would expect.

The refusal to apologize for the past in any way is emboldened by the recent Sinn Féin electoral success -- they have gone from one Dáil seat in 1997 to 37 seats in the last election and currently have a bigger democratic mandate than either Fianna Fail or Fine Gael.

This is a result of the disillusionment of so many younger voters with both of the traditional big parties, Fianna Fáil and Fine Gael, the feeling that the political system is stacked against them and ignores their needs on housing, health, jobs, the cost of living and so on.  But it also enables Sinn Féin to spin their version of our recent history.

That has been made easier by the centenary commemorations we are now celebrating as we remember the foundation of the state 100 years ago, the 1916 Rising, the War of Independence, Partition, the Civil War.  It's difficult to commemorate the violence that happened back then without running the risk of enabling that to be used to justify the violence in the North after 1970.

The simplistic glorying of what happened 100 years ago during the struggle for independence makes it possible for Sinn Féin to claim that violence was necessary both back then and more recently, that it's all part of the same 100 year story of our fight for freedom.  And for that reason they can claim that the IRA campaign in the 30 years of The Troubles should be seen in the same way.

This glorification of the violence that has caused so much suffering and grief here over the decades is dangerous. It is also misplaced.

Given what happened elsewhere in the British Empire it is arguable that Home Rule and eventual independence would have arrived here as well in the early decades of the last century without the violence that has bedeviled our history ever since.

It's also worth remembering that the Provisional IRA which emerged and caused such carnage in the North post-1969 is not the same as the IRA which fought the War of Independence 100 years ago.  And that both Fianna Fáil and Fine Gael emerged from the original Sinn Féin and have just as much right to claim that linkage as the current Sinn Féin, even though they chose the path of peace and constitutional nationalism all those decades ago.

Of course these are vast and complex historical topics, far beyond the scope of this short commentary.  But the essential point is that the current effort by Sinn Féin to rewrite our recent history and make it part of a seamless 100-year saga of heroism does not stand up to scrutiny.

It is dangerous because it justifies and perpetuates the cult of violence that has stained our past.  And it is dangerous because we are now entering an era, post-Brexit, when the eventual reunification of the island might be possible if a more truthful and more inclusive version of our history is accepted by everyone.

The one politician who has fearlessly and consistently called out Sinn Féin on the narrative they are pushing is the Taoiseach and Fianna Fáil leader Michéal Martin. It's not an easy path for him to follow, given that Fianna Fáil regards itself as the real republican party.

And also because Sinn Féin is eating their electoral lunch, hoovering up young voters with left-wing populism that promises everything without having to pay for anything.  But Martin does it anyway and he deserves immense credit for that.

Stanley apologized to the Dáil committee last week.  "I deleted the tweet and I apologize for posting it,” he said.  "As we work to advance reconciliation on our island we need to be able to talk about the past in a way that is honest to each other, to our beliefs, and in a way that does not deepen division or cause hurt."

Which is not the same as admitting that what he said in the tweet is wrong.  You won't hear him, or anyone else in Sinn Féin, saying anything that might question the legitimacy of the IRA campaign in the North.

Stanley has now been put on a week's gardening leave by Sinn Fein party leader Mary Lou McDonald following the emergence of another of his tweets.  This one in 2017 amounted to a homophobic attack on Leo Varadkar after he became Taoiseach.

He's now saying he did not mean to link a person's sexuality with their politics or their ability.  But the "woke" younger members of Sinn Féin are not happy and at least one has resigned over this.

All of which shows how much Sinn Féin has to learn. The trouble is that a lot of them don't want to learn, particularly about history.

They would rather varnish over the truth and the attempt to portray the Provisional IRA campaign as just a continuation of the War of Independence is just one example of this.