Sinn Féin Vice President Michelle O'Neill said that a United Ireland would ensure "something better" for nationalists and unionists in Northern Ireland. 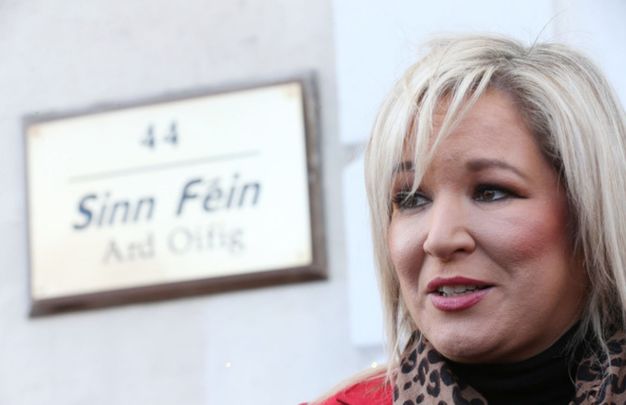 Sinn Vice President Michelle O'Neill believes that now "is exactly the right time" to start talking about a United Ireland.

O'Neill was talking to Ryan Tubridy on RTÉ's Late Late Show on Friday night and said that a United Ireland would ensure "something better" for both nationalist and unionist communities in Northern Ireland.

"Partition has failed us all, not just nationalists or republicans but those people from a unionist background with a British identity," O'Neill said. "There's something better for us to actually own our future together. Plan it, find a way to ensure that Irish identity and British identity can live side by side. We've lived apart for far too long."

She added that there was a need to talk about what education and healthcare would look like in a United Ireland, stating that Northern Ireland's health service was "on its knees" because of the Conservative Government in Britain.

O'Neill also said that she wanted to ensure that British identity will be protected on the island of Ireland if the people of Northern Ireland voted for a United Ireland.

Referencing the recent violent riots in loyalist communities in Belfast and Derry, O'Neill said that the time was right for "open dialogue" and to have the conversation about what a United Ireland might mean.

"These young people who are on the streets, some of them are as young as 13," she said. "They probably don't even know what they're on the street for. What we need to do is make sure that that young person has money in their pocket, has a home, has a roof over their head, has a job, has a training prospect."

O'Neill said that it was in the interests of politicians on both sides of the political divide in Northern Ireland to ensure that young people have a "purpose".

Northern Ireland's Deputy First Minister also addressed a recent incident that saw two members of the New IRA arrested for placing a bomb inside a PSNI officer's car. O'Neill described the incident as "chilling" and said that the officer was in shock. She also said that there was no room for dissident terrorists in Northern Ireland anymore.

"Nobody's interested in going back [to the violence of the Troubles]", O'Neill said. "This is a young woman with a young child. This could have been potentially fatal to a young woman and her young family."

“Now is the time for dialogue”